Despite its being a staple of 90s weekend television in my youth, I've never actually actually seen Street Fighter the entire way through. Naturally, I accepted the common wisdom that it was utter garbage and not worth my time. However, as Super Buddies proved, I'll watch pretty much anything once, so when I had a lazy afternoon of assembling miniatures, Street Fighter found its way to my television. After watching the film, a single, burning question filled my mind; is it really that bad? Sure, Street Fighter is a bad film, no question, but I honestly found it more "fun bad" than "garbage fire bad". So maybe I didn't grow up with the video games and find the "official" canon impenetrable and overwrought, but, hey, I lived through pre-Marvel Studios superhero films, I get it, ok? But maybe, just maybe, can we, as nerds, forgive Street Fighter, just a little? 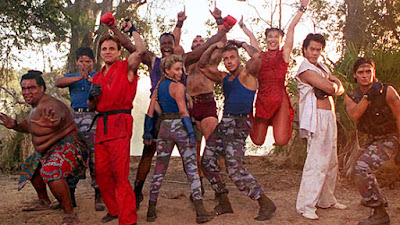 Yes, the film is dumb, but do we really want a super-serious, dour and overwrought live-action Street Fighter film? I sure as hell don't, look how bad that turned out for Superman. Yes, JDVD is terrible in this, but he's terrible in literally everything he's ever done, that's what he does. I'm not sure, with the whole UN thing going on, why they didn't just make Guile Belgian, but it only really distracts during the crappy speech he gives at the end of act two. Also, there is one great thing about Street Fighter that people tend to overlook; the cast. Ming-Na Wen (Agents of SHIELD), Byron Mann (Arrow), Roshan Seth (Indiana Jones), Wes Studi (Heat) and let's not forget Raul Julia, the man, the legend. Maybe this wasn't a great film to end a career on, but how can you be mad at a guy for doing a film to make his kids happy? He's no more campy than the rest of the film anyway. On a personal note, I also like that Zangief has no idea that he's working for the bad guy until the climax of the film and changes sides straight away. Also, he was unaware that literally everyone else in Bison's army was getting paid except him. Made me giggle.

A great deal of effort went into Street Fighter and it's a shame that no one really seems to notice. During the "UN" sequences, the sheer variety of flags present on shoulder flashes is impressive, not to mention how multicultural the extras are. Also, in Bison's base, there are a lot of propaganda posters in the background, all decrying the UN. What's really cool about this is that they are all real propaganda posters (mostly from WWII) that have been adapted by some clever artist whose work has never been appreciated. Seriously, I can't even find them on Google, what a waste of hard work. Give Street Fighter another go, it's worth it. Hell, Raul Julia camping around like Adam West is about to bust in is worth it. The scene between Julia and Ming-Na Wen is worth it alone! "For you, the day Bison graced your village was the most important day of your life. But for me, it was Tuesday." Brilliant.
Posted by Hat Guy at 3:11 PM 1 comment:

No, I didn't forget about this one, but circumstance conspired against me. I blew through most of my savings in my last trimester of Post-Grad, so I can't be too picky with work at the moment, meaning I'm missing club more often than not. So the campaign did continue for a while, but I didn't participate as much as I would have liked and there weren't a lot of photos taken. That means that this is the second and final entry for the campaign, which is not really what I wanted, but it doesn't follow that the exercise failed. I ended up with half a dozen people playing SuperSystem [4], mostly for the first time and more interested besides that. When I break out the supers again at club, probably in 2018, I imagine I'll have even more players keen to give the game a go.
Here are the last of the game pictures, with what commentary I can remember, with the "new format" of the blog, you'll be seeing this somewhere around six months after the games were played. 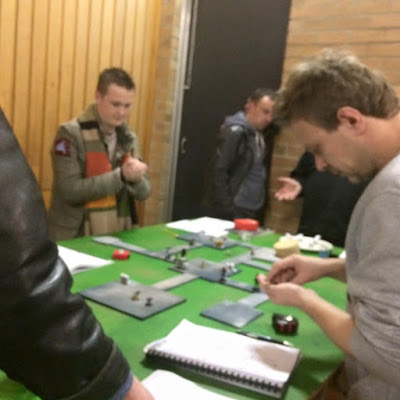 Testing out the "Base Battle" scenario on my new, easy to transport board. 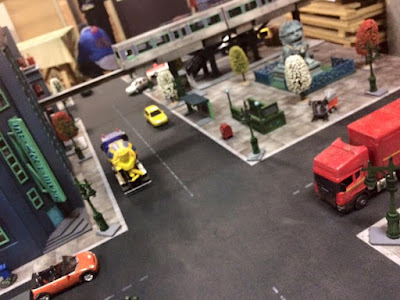 Still thrilled to bits with my Deep Cut Studios mat. 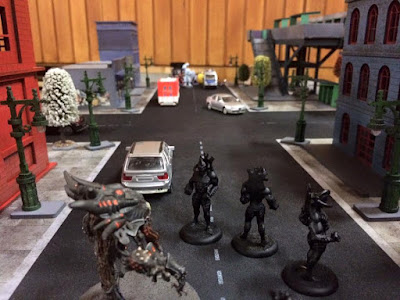 Invaders from another reality menace the city. 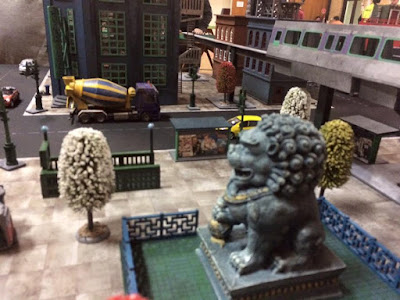 The plaza needs a little work still, but looks good in this shot, right? 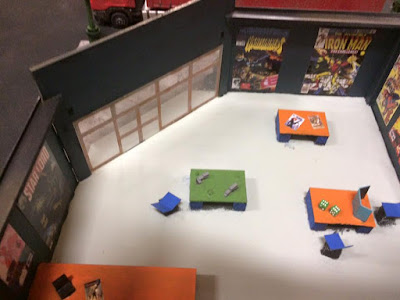 Triskelion Comics has had some updates since this, when it's closer to done, I'll take some new pictures. 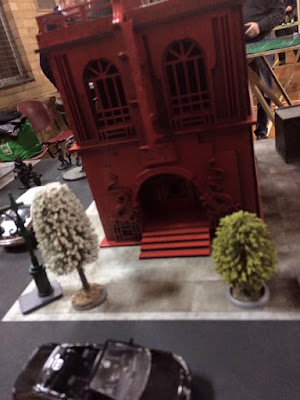 My Knights of Dice building is waiting on the interior kit before I finish it off. 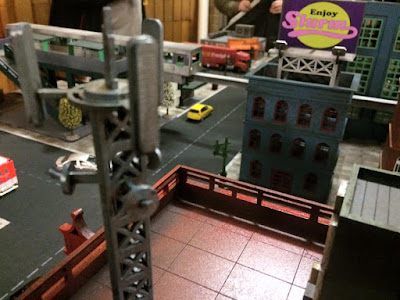 The view across the rooftops. 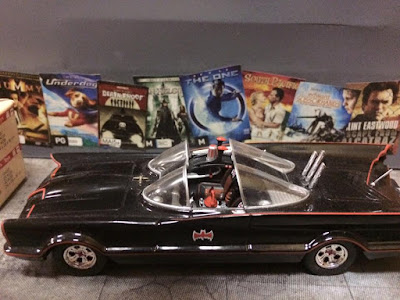 The comic store owner has a sweet ride.
Posted by Hat Guy at 3:24 PM No comments:

This is one of those odd cases where I'm not sure if this programme is just silly fun or really damn clever. Some elements of the setting and characters remind me of 30 Rock and The Unbreakable Kimmy Schmidt, which may be contributing to the feeling that it's very smart, or perhaps obfuscating the silliness somewhat. The city-state of Neo Yokio is an odd hybrid of New York, Monaco and how Europe looks in Studio Ghibli films, with a sunken section of Manhattan, "the sea under 14th Street" and a slum district in Queens reminiscent of Kowloon Walled City in Hong Kong. In fact, this programme is probably worth a quick binge for the setting alone, if you're the kind of gamer who likes a fictional base for their games. In the Victorian era, the city-state was besieged by demons so the mayor invited Old World exorcists citizenship and wealth to emigrate, creating today's Magocracy, where exorcist families are the wealthy and well-to-do of the city. 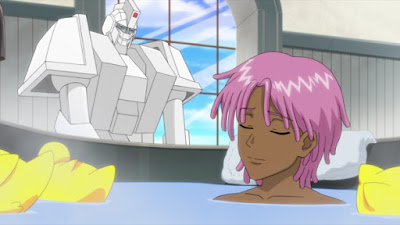 Our protagonist is Kaz Kaan, a member of the idle rich more concerned with fashion and social standing than his destiny as a demon-fighter. Kaz's privilege is probably his defining feature, with more episodes revolving around Neo Yokio high society than actual demon battles. All of Kaz's friends are also vapid, idle 1%ers with no real need to work, excepting Helena, who, after being possessed and freed by Kaz, starts down a path of militant, anti-consumerist minimalism, calumniating with the bombing of a local landmark. Wait, is Helena the actual protagonist? She changes over the course of the series, is more identifiable to the audience and actually engages with narrative conflict. God damn it. I'm sick of these not being about the actual protagonist in favour of a bland male with poor motivation. 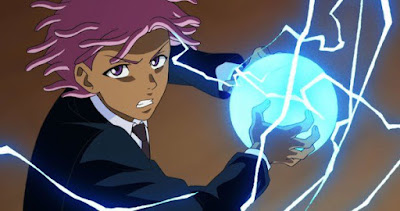 Ok, so is Neo Yokio worth a watch, despite its flaws? I'd say so. As mentioned above, the setting is unique and charming, the voice cast is amazing (Jude Law, Richard Ayode and Susan Sarandon, to name a few) and the references to other Anime are fun to catch (I got Ranma 1/2, Sailor Moon, Dragonball Z and Naruto, but there are probably more). Given that it's Netflix and requires no real effort or additional cost to track down, I'd add it to your watch list and bust it out over a slow weekend whilst painting or making some terrain. Unless the second season manages to do a bit more, I doubt you'll ever see a Kaz and Charles on my Ultimate Alliance tables.

Having been scrabbling to get some villains done for my "Champions of the Omniverse" Marvel RPG campaign, I'm a little shocked at the variety in the latest batch of supers off the painting table. 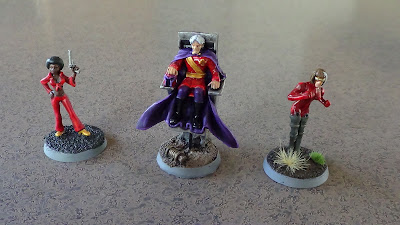 Misty Knight (Reaper), Magneto and Rogue (Clix). I went with "House of M" Magnus because it was the only version of the character I could find that seemed to capture the power and majesty that typifies him. 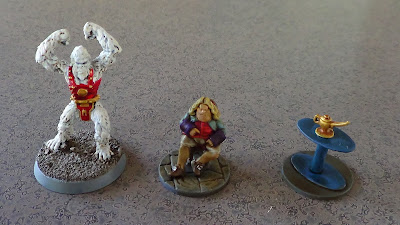 Ultrahumanite (Clix), the Marquis de Sade (Eureka) and Magic Lamp (kitbash). I really like Ultrahumanite and want to use him in games, the Marquis and Lamp will turn up in the (still coming) French Revolution campaign.
Posted by Hat Guy at 10:44 PM No comments: