So after playing a few games and finding a decent play group, I think I'll be getting into Marvel Crisis Protocol [MCP] at least a little. Whilst some of my bugbears with the game, such as the odd scale, overpriced minis and custom dice, remain, having people I enjoy playing with really helps get me into something. Of course, me being me, I can't let well enough alone and have to mess with it a little. Or a lot. I probably don't need to tell anyone reading this that the MCP models are a mixed bag in terms of quality and stability, but thankfully, there are plenty of other options out there for those willing to look. Naturally, I'm not just looking at Marvel superheroes.

Even I'm not so nuts as to want to recreate my SSUA project in MCP, I'm not really sure I could in any meaningful way, so I'm going to need another narrative framework for my AARs and my own self-justification. Thankfully, I happened to have moved house recently and was unpacking some trade paperbacks, finding Contest of Champions and giving it another read. Now here's a concept that needs to be gamed! The Collector and The Grandmaster gather heroes and villains from across the multiverse to battle for the ISO-8, but their chosen champions have their own agendas and soon the situation spirals out of control. So now I have some kind of, Multiverse or Champions... Protocol? Yeah, that works.

With the theme and basic narrative framework down, I can start looking at what teams I want to build, as MCP works on "Affiliation[s]", so just collecting any random character because I like them won't work. As I already own the MCP Hulk and Moon Knight, the Defenders Affiliation looks good to me, as they both fit and the variety of heroes is pretty broad, including Doctor Strange, The Ancient One, Spider-Man, Blade, Clea, Daredevil, Elektra, Ghost Rider, Hawkeye, Iron Fist, Luke Cage, Magik, Scarlet Witch, Valkyrie, Wolverine and Wong thus far in addition to the pair I already have. This is a pretty fun spread of characters, and I can see myself buying some more official models, some characters that would work with my existing proxies and plenty of room to expand if I start enjoying the game more.

So what does this mean is "in the pipeline" for my MCP games? Well, more figures from different franchises, more AARs and some fiction justifying why I have an odd mix of characters fighting my opponent's Official Team. Basically the same nonsense I've been doing for years, but now in 32mm. Throw in a little Dragon Ball Super Universe Survival and the multiverse antics of What If? and we should be getting pretty close. 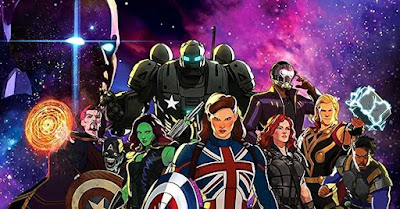