Thinking Out Loud: The Gospel of Frank

Two things of note happened to me recently, one being that I decided to dive back into media of The Punisher, Marvel's murderous vigilante, the other being that I saw a person on the train wearing a "Blue Lives Matter" mask emblazoned with the iconic Punisher skull. Longtime readers of this blog should experience zero shock at the fact that I support defunding the police and find anyone supporting the "Blue Lives Matter" movement to be, at best, misguided, if not outright hostile to my belief system. So then, how does a humanistic Anarchist pacifist find themselves enjoying the Punisher, and what do I think the character represents in a contemporary setting? This one's going to be something of an essay, so settle in for a long one. Frank Castle, as presented in his original role as a Spider-Man antagonist, is something of a "Dirty Harry" figure, intended to contrast Peter Parker's unwillingness to do lethal harm. That comic fans are wont to misunderstand subtlety and take to idolising characters originally intended as parody and pastiche is so much to be taken as read, that, of course, Frank Castle became a cult darling very quickly. 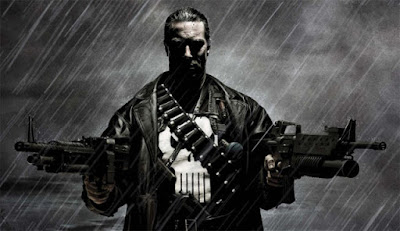 From my understanding, very much that of an outsider, I'll admit, I believe that the element of Frank Castle that attracts the reactionary (and often bigoted) police officer is the perceived lack of accountability. Those few police officers that I am able to be friends with echo this sentiment to a certain degree, at least in that they feel the bureaucratic elements of their work can often hold them back from doing their job better. For my friends, they consider "the job" to be service-based, helping people at risk or in need of aid, with the peacekeeping element as secondary, at best. For those police who believe the, utterly false, narrative of "good guys and bad guys", however, The Punisher represents an efficacy of justice without restriction; for a particularly skewed idea of justice. From my perspective, informed as it is by research and academia, I believe the "best" form of direct justice is rehabilitative, with the aim that any perpetrator receive the support they need to engage properly with society. Critics of this position claim that it doesn't tackle the root cause of criminality, and, actually, I agree. But Frank Castle doesn't engage with those causes of crime either. 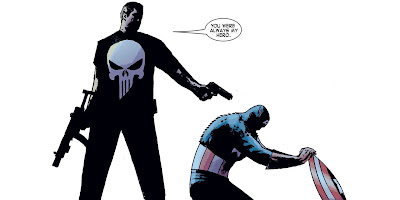 Despite what you may have heard or read in popular news press, the cause of most crime is very well known and demonstrated by a preponderance of evidence; the cause of crime is poverty. In my own country of Australia, petty crime has dropped sharply for the period of the COVID-19 pandemic, and our federal government has increased welfare for that same duration to be, for the first time in many years, above the poverty line. So as many found themselves able to afford both food and rent, crime for the sake of subsistence dropped. Funny that. To bring this back to the idea of "dispensing justice", to the person stealing to avoid destitution and/or starvation, incarceration does little to remedy the root cause of the crime, merely delaying an inevitable relapse into the same behaviour. So want to end crime? Don't give more money to the police, give it to the poor instead, the results are certain and well-documented. 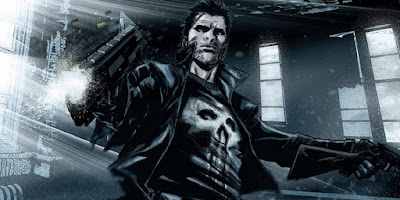 So what does all this have to do with Frank Castle and his astounding body-count? Well, believe it or not, Frank doesn't do what he does with the mindset that he is, in any way, helping to end crime, only to end criminals in a very immediate sense. In Contest of Champions, an alternate version of Frank (from a universe where they lost the Superhero Civil War) is challenged by Outlaw (aka the British Punisher) over the politics inherent in murdering criminals, many of whom are people of colour; Frank replies that what he does is "not political", with Outlaw implying that this assertion comes only because he is White. With anything more than a cursory examination, The Punisher, whilst indiscriminate with his killing of anyone he, personally deems to be irredeemable, is seemingly possessed of a supernatural ability to never come close to injuring an innocent person. In this, as such an ability is something only a fictional character can manage, I personally find my ethical balance with Frank Castle. Despite his lifetime of wholesale murder, he cannot, and will, never hurt an innocent person. 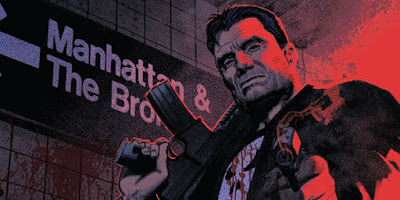 So is it this superhuman accuracy which endears Frank to a certain subset of police officers? Because the idea of being The Punisher cannot truly be appealing, with his extreme nihilism in the face of crippling grief abated only momentarily when he gets into a truly great killing streak; it just sounds like a really bad time, right? Or is the appeal Frank's almost total lack of accountability for his actions? The Punisher can murder as many human beings as he wants (and despite your feelings on their crimes, drug dealers, pimps and mafiosi are actually human and have rights) and never suffer any real legal or ethical consequences. That's why Blue Lives Matter is a dangerous ideology, because police officers, be they "good" cops or not, want a version of their career in which they are permitted to commit more murder with less consequence. I don't know about you, but that idea fucking terrifies me. Frank Castle is the protagonist of his stories, not the hero, anyone who wants to be him has no right trying to dispense justice, as that is not what Frank Castle does, on any level.
Posted by Hat Guy at 2:26 PM