Feels like my heroes got pushed to the back-burner for my Deathwatch, so I'm glad that I'm able to get some up here again. Even if there are two more Deathwatch in this lot. 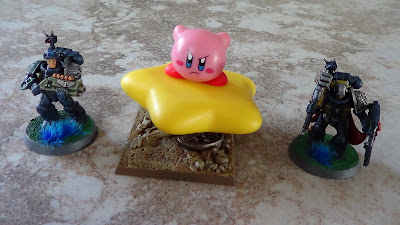 Balder the Brave: Just a simple head-swap on this one, Balder comes into the 40k universe as a Deathwatch Veteran with shotgun. Converted Games Workshop.

Kirby on Warp Star: My packet of Kirbys had more than a few spares in it, so naturally I had to make a Maximilian 1934 version to go with my Ghost Rider and Yamcha. The base is from an old Warhammer giant and it was in my box of spares. Toy.

Thor (Jane Foster): Just another Heroclix head on a Space Marine, but I've developed a fondness for female Marines and the rage they induce in idiots on the internet. Naturally, Jane gets a hammer and a shield. Converted Games Workshop. 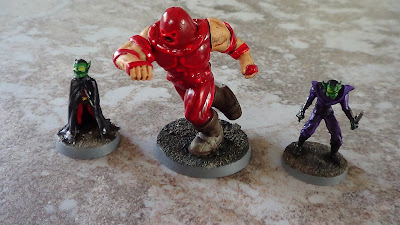 Skrull Infiltrator: As I mentioned way back in my first Superhero Wargames Armies Ideas, making Skrulls is pretty fun and easy, so I've been working on a few to break up other projects. This one is Damien Wayne. Converted Heroclix.

Juggernaut: After seeing Deadpool 2, I decided I needed a bigger version of Cain Marko. Until a version in prison fatigues is available, this one is pretty impressive. Heroclix.

Skrull Infiltrator: It looks as if  the skrulls have agents even in the mysterious Foot Clan! Most of my Skrull conversions are based on whatever I have spare in my Heroclix, so there's no real plan, other than to avoid any major characters and avoid too much Marvel stuff. Heroclix.
Posted by Hat Guy at 1:29 PM