After more than a year without a game, I had a chance to get some SuperSystem games in at a club meeting. I missed this game, but I also realised that there is still a lot of work to do on my city table. Ok, so I may never actually "finish" this table, it's the kind of thing that I can just fiddle with for years, adding little touches and improvements. When I get a chance, I'll set the whole thing up and make a list of what needs to be finished, fixed, replaced, improved, etc. Maybe finally get to that stash of pieces to fill out building interiors and those graffiti transfers. Anyway, on with the game; we played the "Rescue" scenario, which I've never been a huge fan of, as I felt the balance was off, especially if the defending team can just move the VIP wherever they want. I want to go back to writing Mission Scripts for SuperSystem, but it always seems to be far down the project stack. 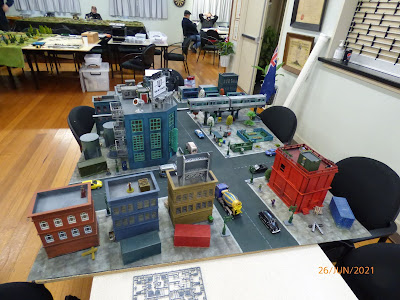 It was a chilly day in Superhero City, the slight breeze doing little to dry the steady and soaking rain. On one street corner, the wind intensified for a moment as a Boom Tube opened and out came The Champions of the Omniverse! For this mission, the inscrutable Eon has sent that Magnanimous Mutant, the Mighty Manzilla! The X-Treme Arachnid, Spider-Strike! Mystical Martial Arts Master San-Te! Beneficent Cyborg The Bi-Centurion! Super Sentai Stalwart Koga! Why are they back? Why are they here? Is this the start of a new adventure for the team? Only time will tell! 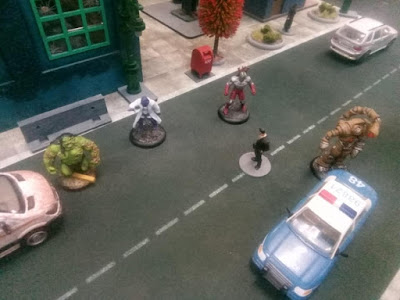 The reason the Champions have been summoned to rescue Anderson Sterling, a young executive for the Cicada Corporation, a digital firm specialising in Security Algorithms. Sterling has been captured by a team of villains (from the left), the Bulk, Doctor Psycho, Ion and Red Diamond, a nefarious crew out to make a quick buck in the ransom racket. 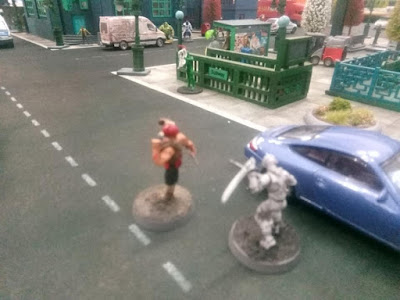 Being a tad more sneaky than other Champions, San-Te and Koga approach from the South, using the cars and pedestrian park as cover. Somehow, Koga forgets that he can turn Invisible, so it's up to the former Wu-Tang monk to charge in and pin the villains down. 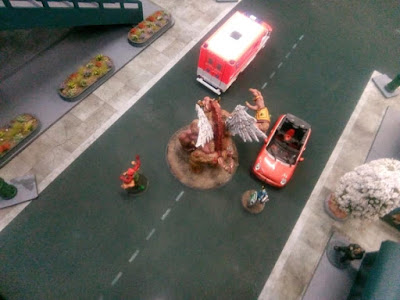 Coming up from the other side, the remaining Champions, Spider-Strike, Manzilla and Bi-Centurion, are actually a little closer to the kidnappers, but are slower, so they make a direct line for their foes. 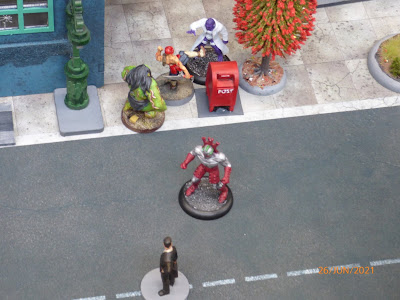 San-Te quickly becomes surrounded, but his speed and agility prevents The Bulk from landing a blow, and his hits are telling on the physically weaker Doctor Psycho. Best of all, the distraction of a whirling Kung-Fu monk in their ranks has caused the villains to not keep as close a watch on Sterling as they had been. 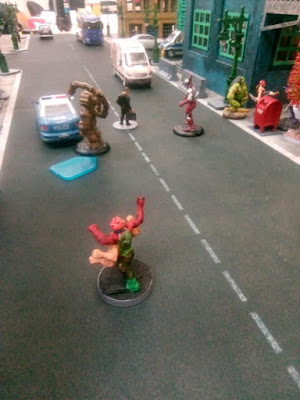 Unable to hold back his X-TREME power, Spider-Strike makes a dash for the fray, spotting the VIP, he calls for backup from his teammates. Red Diamond takes to the air, but his energy blasts fail to injure the agile arachnid. 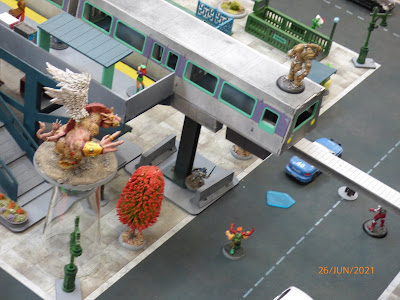 Also leaping into the skies, Manzilla attempts to draw Red Diamond's fire whilst the Bi-Centurion takes cover from Ion's energy blasts. What little plan the Champions have used is working, as the villains are scattered and there is a clear path to Sterling for a rescue. 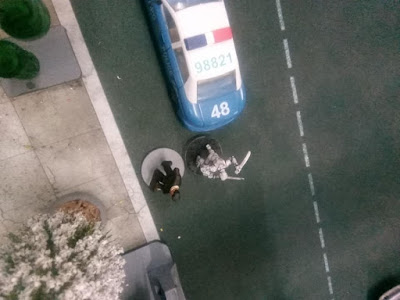 Finally remembering to use his Invisibility, Koga sneaks forward and grabs Sterling, moving him to the cover of a nearby police car. Finally twigging that they've been had, the villains break away from San-Te and Spider-Strike and give chase. 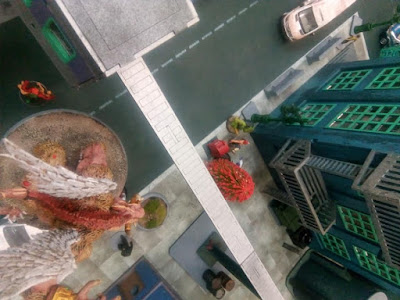 Attempting to slow down the chasing villains, the Mighty Manzilla swoops in, lining up the cluster of baddies around San-Te and preparing to unleash his secret weapon. A foul and viscous stream of slippery goo erupts forth from Manzilla's snout, covering Doctor Psycho, San-Te and The Bulk and knocking all of them off their feet. 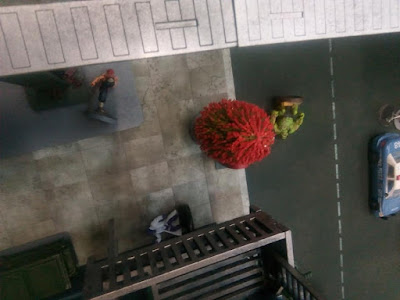 Sliding around in the goo, hero and villains alike find themselves temporarily out of the fight. In the confusion, Koga hands Sterling off to Bi-Centurion and the Champions of the Omniverse make a break for safety. 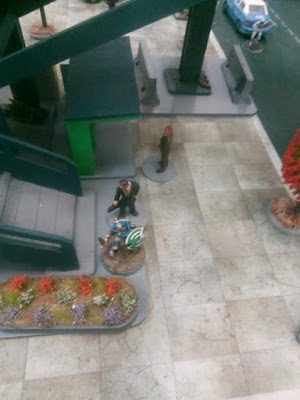 Due to originally being built as a bodyguard droid, the Bi-Centurion is tough and strong, but not quite as fast as it could be. Making a dash with Sterling, Bi-Centurion gets to the Monorail Station entrance, but finds his path blocked by Red Diamond. 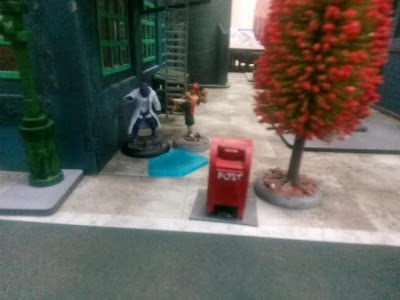 Meanwhile, San-Te has sprung to his feet and is unleashing a brutal assault on Doctor Psycho, keeping the sinister psychic pinned against a wall and unable to use his vile mind powers. 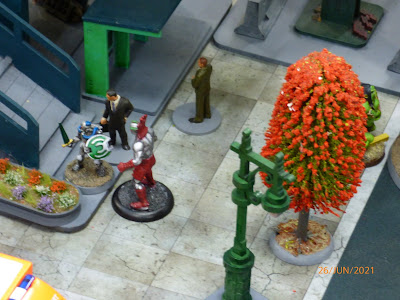 Not letting the heroes get away so easily, Ion charges into the Bi-Centurion, but the two metal warriors clash without damaging each other. 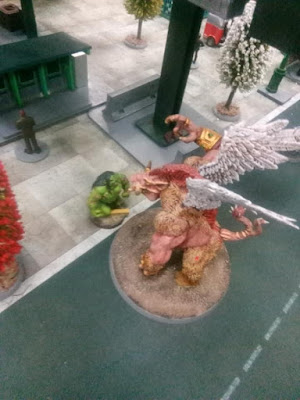 To head off further interference, Manzilla throws himself at The Bulk and the two muscular monstrosities proceed to beat each other senseless. Thankfully neither beast is bright enough to twig to the fact that they are pretty evenly matched and the fight will go nowhere. With a satisfying snap, one final kick from San-Te lays out Doctor Psycho, causing the only casualty of the entire game. Sometimes SuperSystem is like that, especially with high Toughness characters on the board. 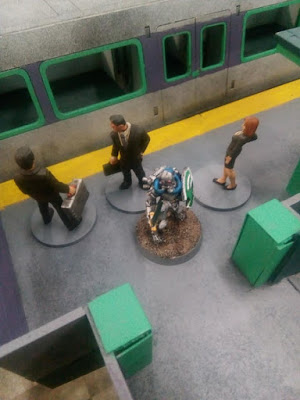 In the chaos, Bi-Centurion is able to slip away with Sterling, and, lacking options, bundles him onto a Monorail carriage, making good their escape. Victory to the Champions of the Omniverse!

This was a pretty fun game, so we played another, but that one didn't go well and we had to wrap up early, so I just did the AAR on the one. I still really like SuperSystem for this kind of game, even if it can get a little complex at times. Hopefully, I can play some more games this year and draw a few new players in with my city table.
Posted by Hat Guy at 3:38 PM