In a world of superhumans, alien invasions and supernatural creatures, few things strike fear into the heart like the killer robots known as the "Blackwing Androids". Appearing seemingly from nowhere, these monsters have only one mission, to destroy super-humans. Countless lives have been lost to the Androids since they first appeared and attacked both the Equalisers and Pendragon Security as the two foes were engaged in battle. From time to time, one of the Androids is seemingly destroyed, though it always returns and any tracing of the parts only leads to the defunct Blackwing Robotics, a former division of the enigmatic and elusive Raven Corporation. Whatever their origin and purpose, the Blackwing Androids represent a major threat to the world, with all superhuman peacekeeping forces making their complete destruction a priority of the highest order. 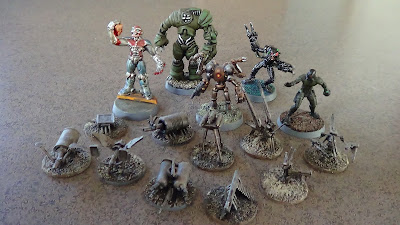 The Blackwing Androids. From left to right, Seeker, Anvil, Tinker, Razor and Sink, Gunbugs in front.

The Blackwing Androids
Despite the best efforts of the Equalisers, European Union Super Soldiers and others, the Blackwing Androids remain a major threat to superhumans the world over. Each robot appears to have been specifically designed to combat a common power-set, and when they work in tandem, they can be almost unstoppable. As well as famous names, it is suspected that the Blackwing Androids have hunted and killed countless emerging mutants and neophyte heroes before they could become a threat to their unknown masters. 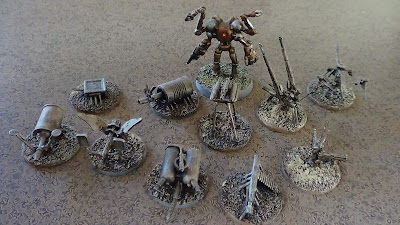 Tinker: The least aggressive of the Blackwing Androids, Tinker performs most of its murder by proxy, as well as being the security expert and hacker for the team. Not overly strong or tough (by robot standards) Tinker builds small attack robots out of scrap to overwhelm foes in a whirlwind of stabbing metal. Though these miniature killing machines take the form of whatever happens to be around Tinker in terms of raw materials, weapons-based constructions, known as "Gun Bugs" are seen more often than not when Tinker arrives prepared to a mission. This has led to investigations of various munitions companies as possible origins for the Blackwing Androids, but nothing new has yet been uncovered. 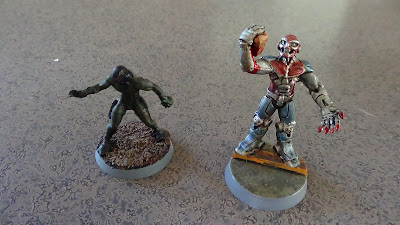 Sink: Whilst most of the Blackwing Androids demonstrate "powers" based on engineering, Sink's ability to "switch off" superpowers is decidedly more esoteric. Just how the android achieves this remarkable feat is yet to be determined, but the effect is no less deadly for lack of understanding. More than one hero has been caught out when their invulnerability has been "switched off" by Sink just as a crushing blow from Hammer is about to land. Due to its otherworldly abilities, Sink is the only Blackwing Android to have an international warrant for capture on it, rather than extermination.

Seeker: A hunter par-excellence, Seeker masqueraded as an independent superhero called "Guardian" for a number of years, infiltrating the superhero community and learning weaknesses before it struck. Seeker is a repository of knowledge on Earth's superhumans, especially how they can be defeated in the most expedient and efficient manner. As a tribute to its prowess, Seeker's first act upon revealing its treachery was to defeat both Wildcat and the Anachronism in hand-to-hand combat; beginning what came to be known as the "Blackwing Assault". Although each of the Blackwing Androids functions independently, if they were to be said to have a 'leader', that role would fall to Seeker. 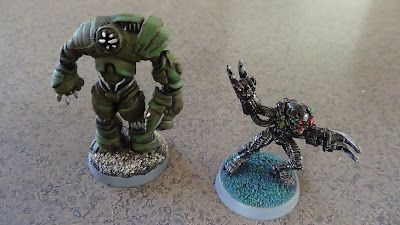 
Hammer: A large lump of metal with powerful limbs and sharp spikes, Hammer is not subtle and nor is its combat role, battering foes into submission. Ponderous, but far from slow, Hammer's dynamic servos propel it across the battlefield and bring smashing blows raining down on its target. In battle, Hammer and Razor often work in tandem, preying on a single victim at a time.

Razor: Where Hammer is a blunt instrument, Razor is precise and swift. Armed with deadly blades on its hands and feet, Razor tumbles through combat, slashing and cutting down anything unfortunate enough to get in its way. A complex array of lenses and sensors, as well as a radar-invisible plating enable Razor to strike from the shadows and withdraw before the victim is aware of what has transpired.