Another one a bit out of left field, Abraham Lincoln: Vampire Hunter was something I watched on a whim, yet again whilst painting Superhero miniatures. I'm glad of two things, one, that I didn't pay to watch this film, and two, that I've been playing Empire of the Dead of late and that I've been thinking about Vampiric silliness a bit. In terms of story, Abraham Lincoln: Vampire Hunter is about what one would expect; a young Lincoln encounters Vampires when one kills his mother and is set upon a path to hunt them down by a mysterious benefactor. In terms of story, the film isn't actually too bad; it's cheesy and a bit silly, but doesn't muck about with history too much, it was very close to being a fun romp.

Where the film falls down is in the effects, stunts and sound mixing. I know complaining about the sound mixing may be going a bit heavy on the film graduate vibe, but I honestly couldn't hear the dialogue half the time because the background noise and soundtrack were far too loud. Speaking of the soundtrack, with all of the fantastic music that came out of the American Civil War, why go with a synth-rock soundtrack? It's just distracting. As distracting is the overuse of CGI in every single fight scene, making parts of the film look like a video game cinematic. Finally, I don't know what the stunt team were doing, but none of the fighting or gunplay looks at all realistic, I've seen more convincing use of firearms in Z-Grade shlock out of South East Asia.

If you can put up with its many flaws, Abraham Lincoln: Vampire Hunter makes alright fodder for VSF/Colonial Horror or Superhero games, especially Empire of the Dead. I certainly won't be watching it again anytime soon, but given the 10 odd miniatures I painted while watching, I don't feel that it was time wasted.
Posted by Hat Guy at 7:22 PM No comments:

Email ThisBlogThis!Share to TwitterShare to FacebookShare to Pinterest
Labels: Alternate Supers, Empire of the Dead, Film

Miniatures Finished: A bit of everything

Plenty of new heroes and villains off the painting que this week: 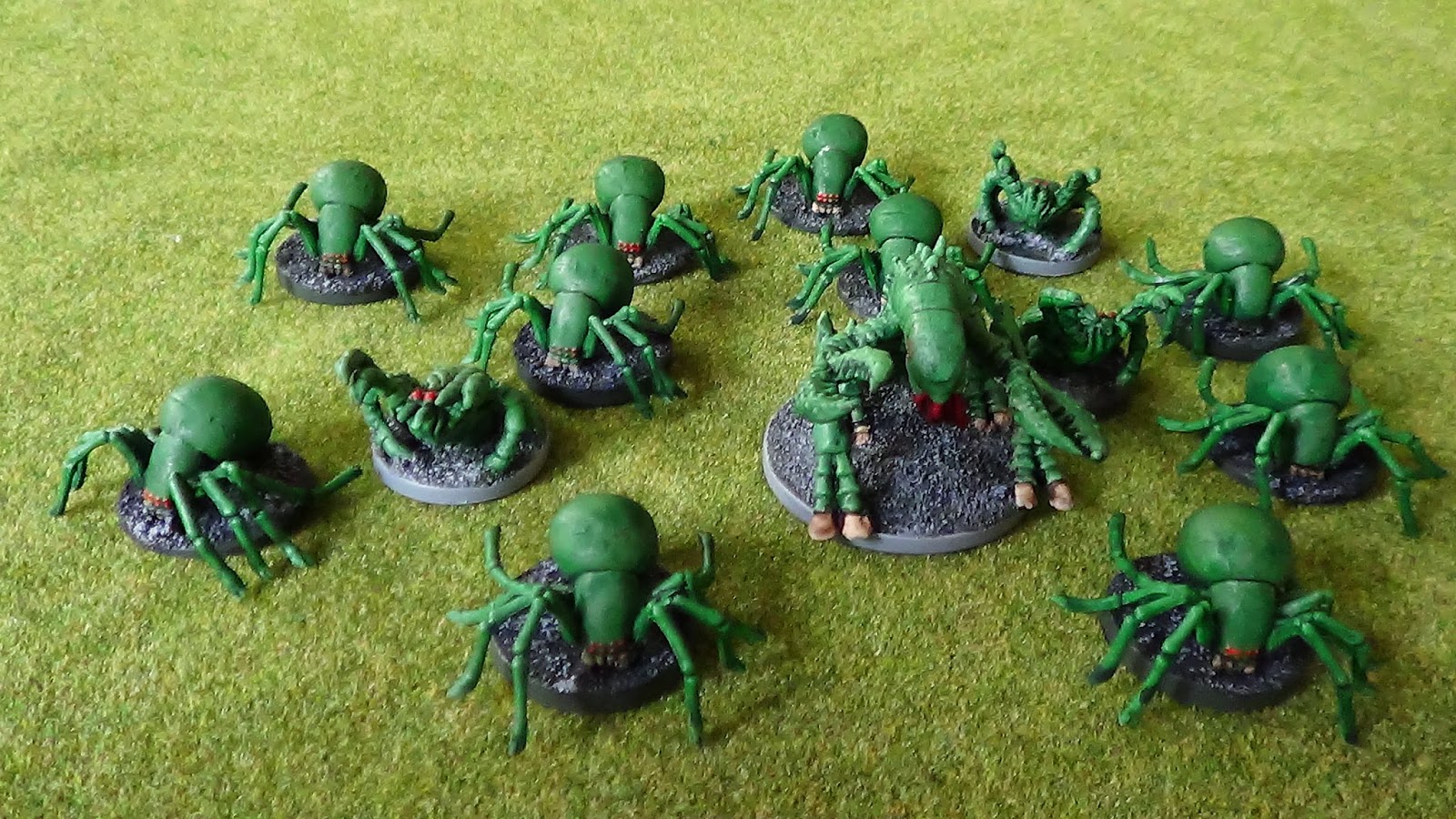 More bugs for the Annihilation wave. All D&D miniatures. 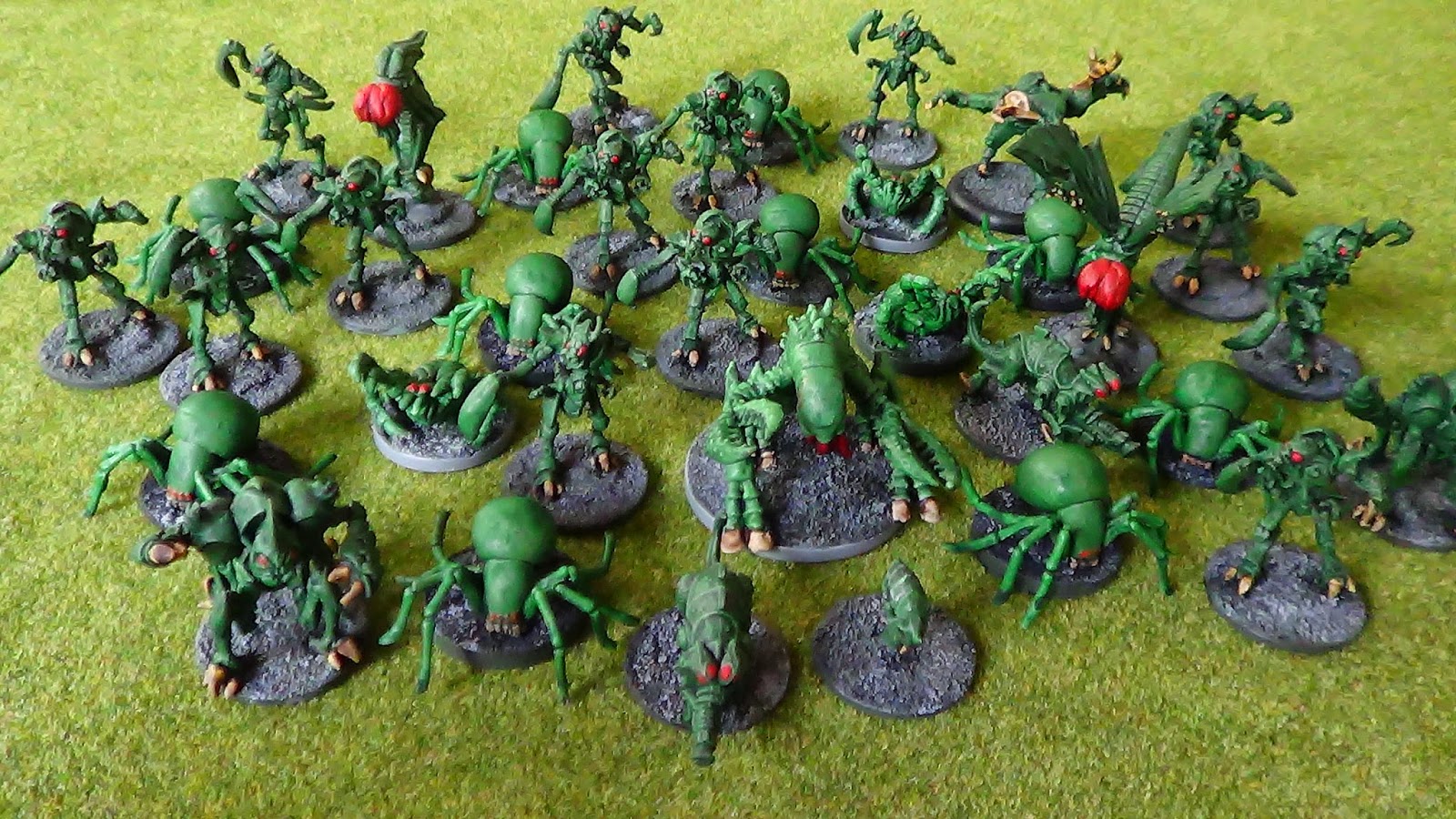 The complete wave. Thirty six minis in total. So far... 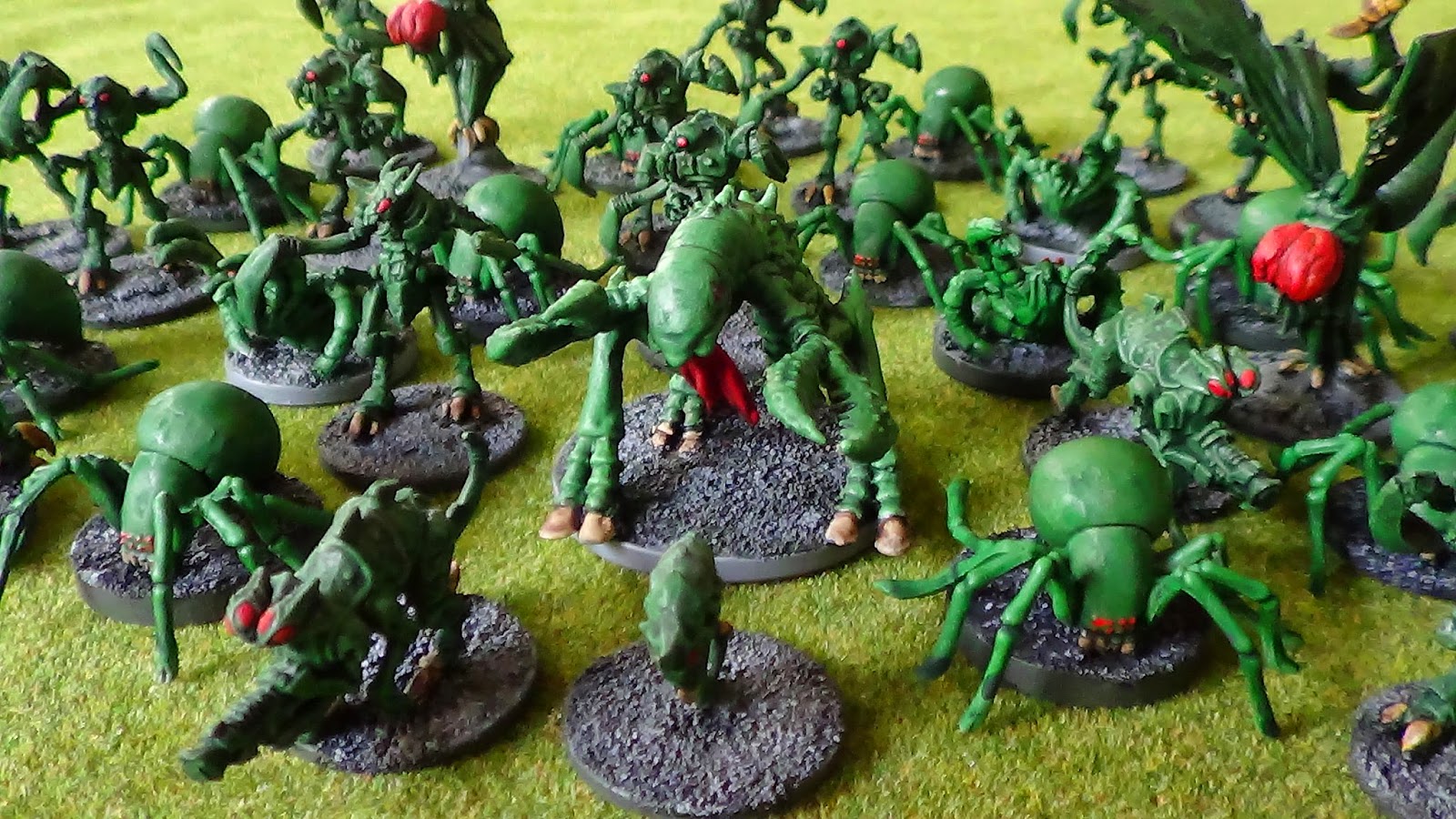 It comes, and there is no escape... 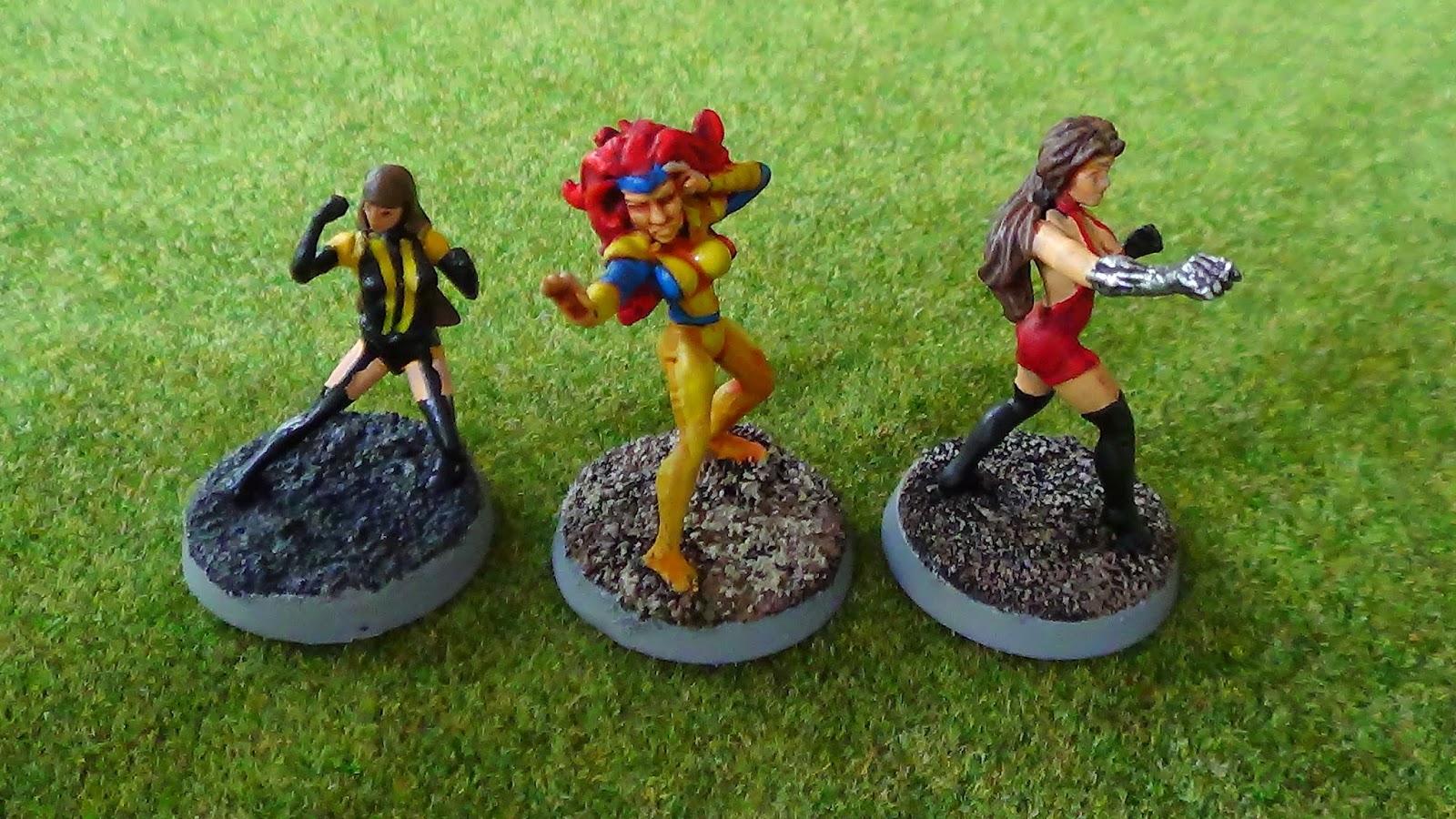 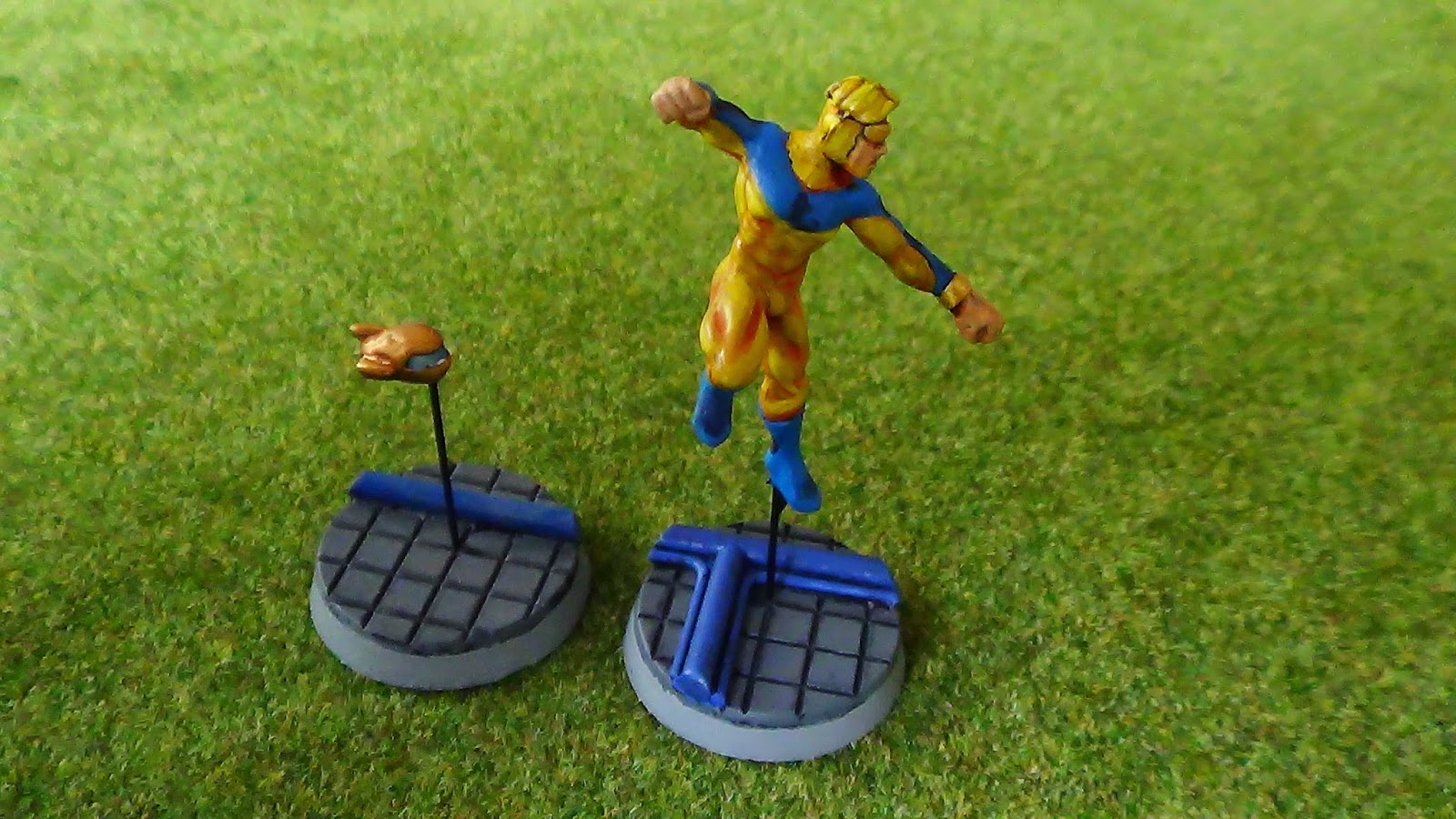 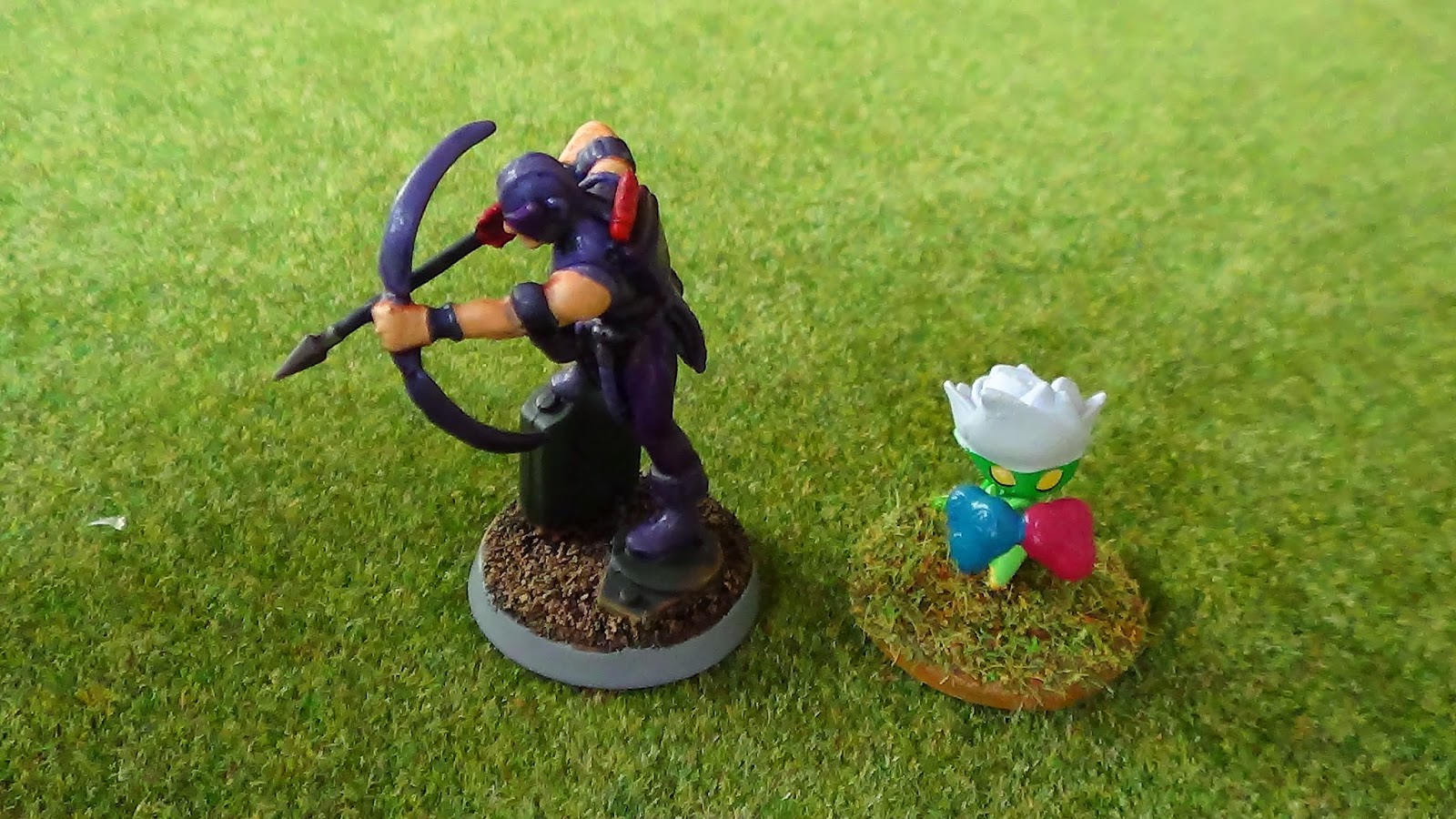 Hawkeye and Roserade; Pokemon Trainer Taupe having found a Shiny Stone.
Posted by Hat Guy at 3:35 PM No comments:

First of all, I picked this dvd up for the princely sum of $5 at my local supermarket, what a bloody bargain. Directed by Brad Bird, of The Incredibles fame (though nearly a decade before), The Iron Giant tells the story of a friendship built between a young boy and a rampaging alien engine of destruction. Add in a 1950s Rockwell-esque background (the town is even called Rockwell) and a large helping of Cold War hysteria and what was a charming film begins to border on masterpiece. Nods to B-grade Sci-Fi and Horror abound and the visual design is reminiscent of '50s propaganda films, but with a modern sharpness and quality, The Iron Giant is a delight every time.

It may seem that The Iron Giant is yet another of my Superhero Media articles that needs to be tied into the genre tangentially, but this is not the case. Although comics and Superheroes were in a bit of a lull in the early '50s, they did still exist, Hogarth actually shows the Giant some comics, including Superman, which he insists best represents the Giant. He's not far wrong; an incalculable power, sent to Earth by forces unknown for reasons unknown, decides to defend us all, and, not understanding, we attack him. The whole film is entrenched in the very early Silver Age. Hell, the Giant even wants to be Superman, look at this picture:

The Iron Giant is probably one of the best animated films ever made. Seriously. It's warm, funny and exciting, but also hard and honest at times, not dressing up issues like death and fear as minor. The ending is meloncholy in a way family cinema does not often dare to be. If you haven't seen it. Go out and get it. A masterpiece.
Posted by Hat Guy at 2:58 PM No comments:

A lot of painting left to do, and still need to assemble the two carriages, but the monorail is coming along nicely. 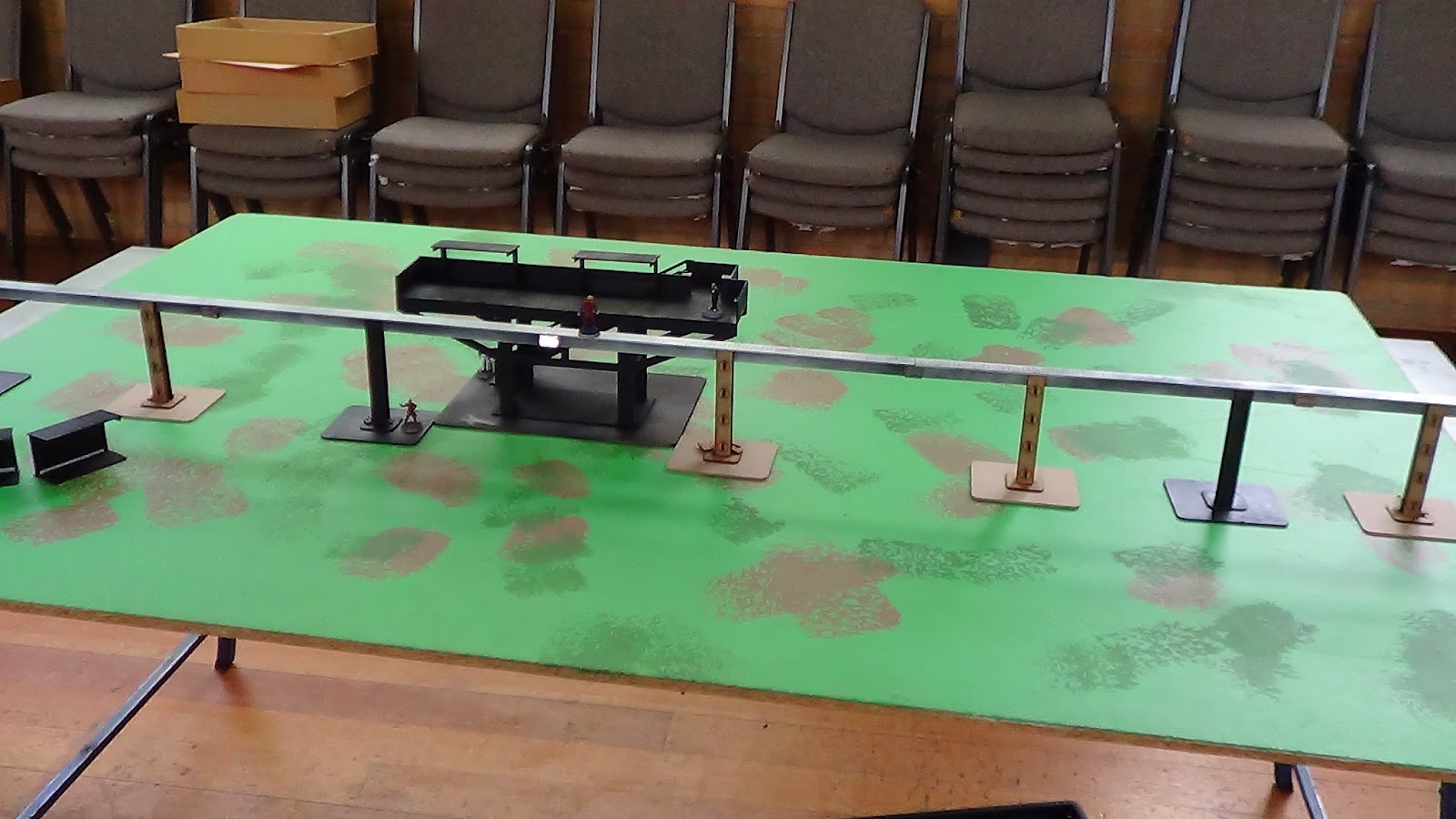 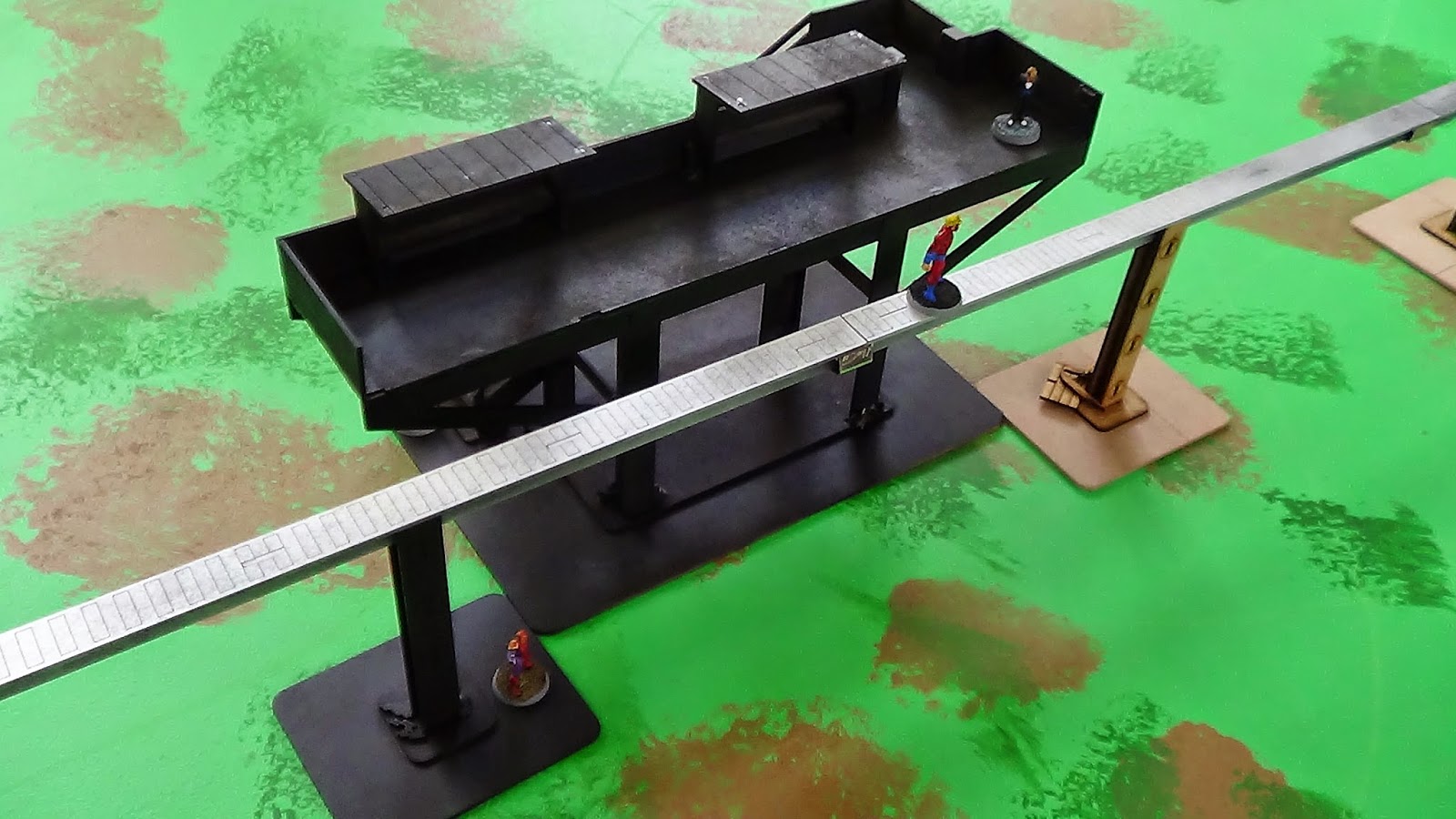 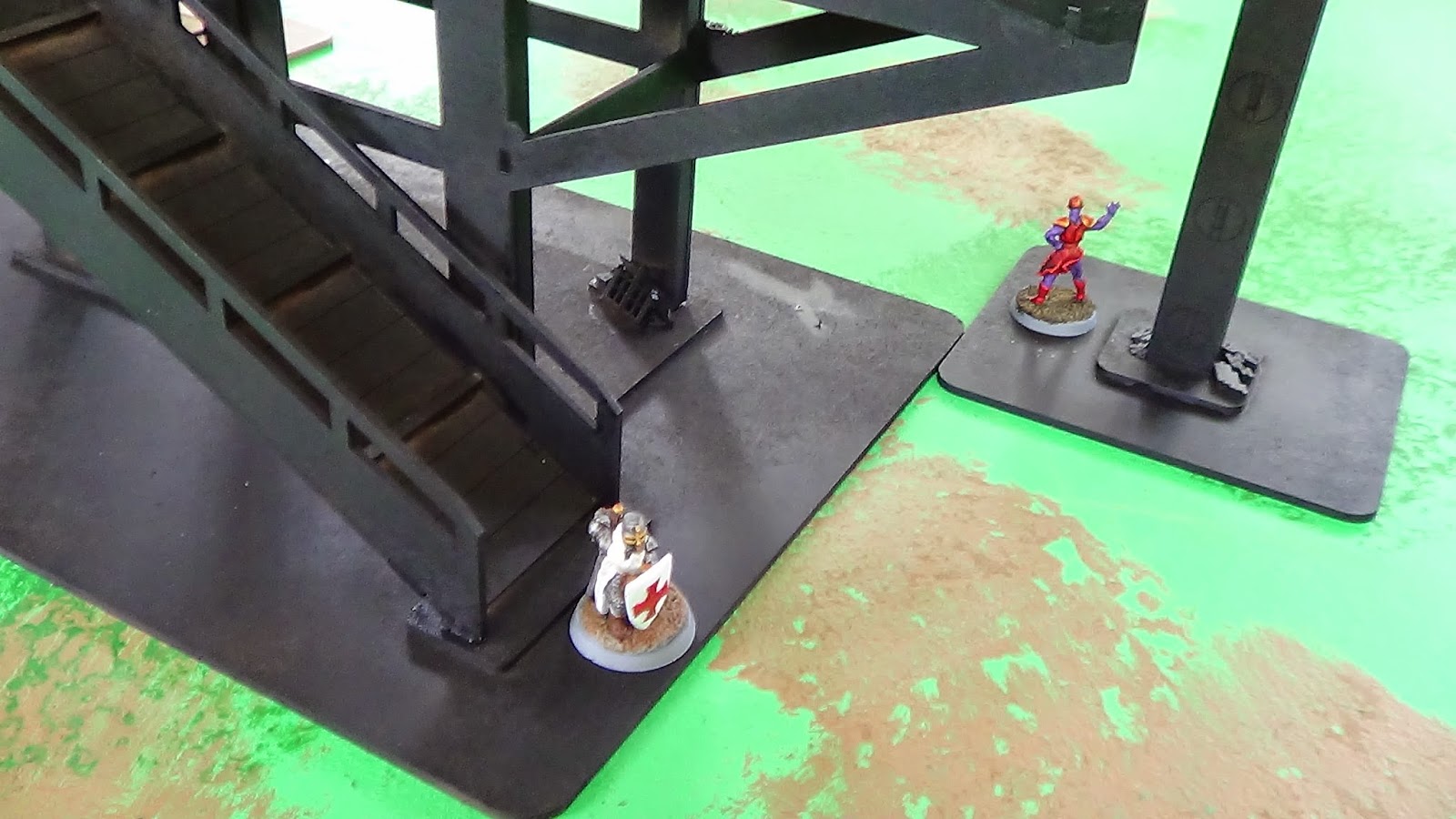 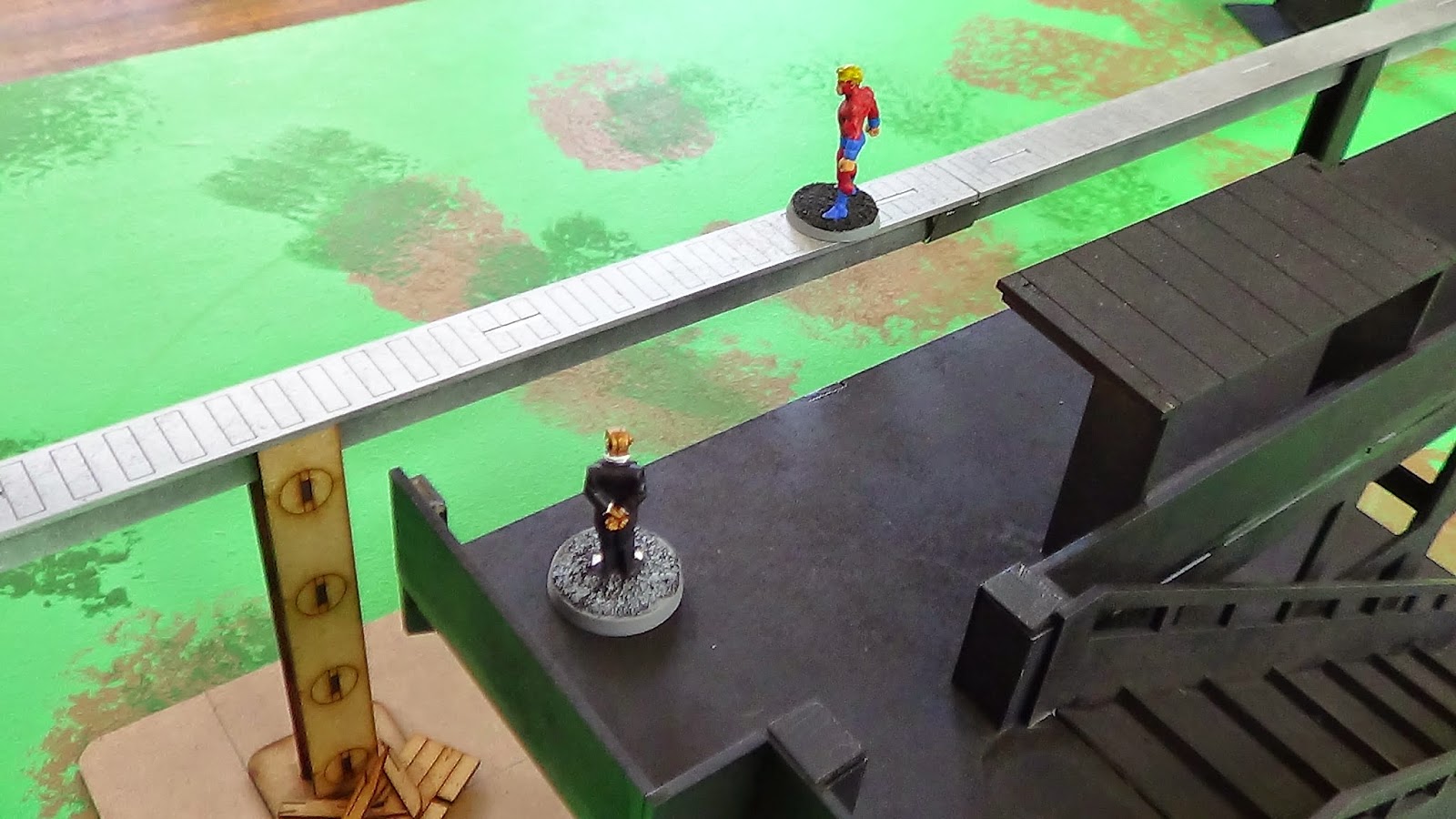 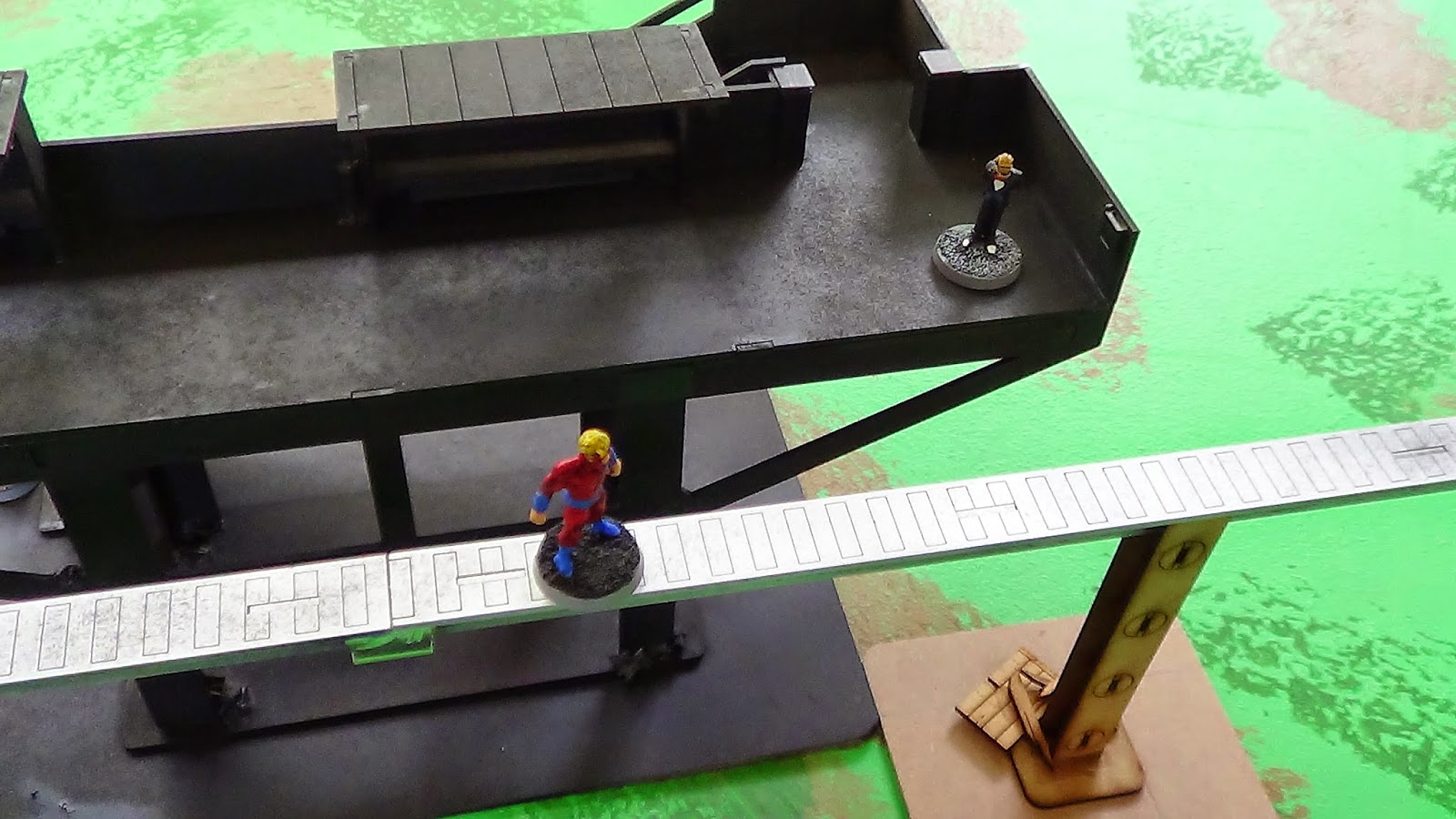 Email ThisBlogThis!Share to TwitterShare to FacebookShare to Pinterest
Labels: Painting and Modelling, Terrain

I'm not really what one would call a "gamer". I do play video games, on occasion, but I'd rather wargame or, if that's not an option, watch something and paint. That said, the Marvel: Ultimate Alliance game inspired my biggest and longest-running supers project to date, so I do recognise the good concepts and ideas that can come from games, even if they're not my favorite pastime. When I run my demo games, however, I get plenty of requests for video game characters, some I've heard of, but most I have no idea. Being the kind of guy who's willing to buy a miniature or two to get more interested in the hobby, I'll go off and have a look at some of these suggestions, only to discover that they're all epically powerful, god-killing golden children. Kids these days... what happened to rooting for the underdog? I do actually have some video game heroes, as you may have seen, like Solid Snake, the Pokemon Trainer and there are a couple more in the pipeline, but there's always those couple more, aren't there?

The very first video game I owned was Kirby's Dream Land 2 on Game Boy. I loved that game, lost track of how many times I finished it, and since then I've tried to own or at least play as many Kirby games as I can, they're great fun, if a little kiddy. For an eight-inch tall ball of marshmallow, Kirby is a rampaging engine of destruction, battling elder gods and ancient threats whilst devouring his foe's very souls to gain their power. In game terms, I'm not entirely sure how Kirby would work, his whole "inhale and copy" ability would be odd in a 3D miniatures game, I think it would be a bit of fun, however, to have this pint-sized, pink "Star Warrior" tangling with the likes of Thanos.

Remember these games? I do. I remember booting up the 486 and typing "keen1" into DOS. Good times. This kind of classic character is exactly what I'm thinking about when I complain about the walking gods that inhabit Video Games these days; a boy genius builds a spaceship in his backyard and flies to Mars, where he finds aliens bent on destroying the Earth, with nothing more than a raygun and a pogo stick, he saves us all. Also he's the ancestor of the main character in Doom. Guardians of the Galaxy showed how the saviors of the universe can be ordinary people with just a little pluck and courage; Commander Keen would look great next to Flash Gordon and Ratchet when the alien fleet lands and starts to wreak havoc. 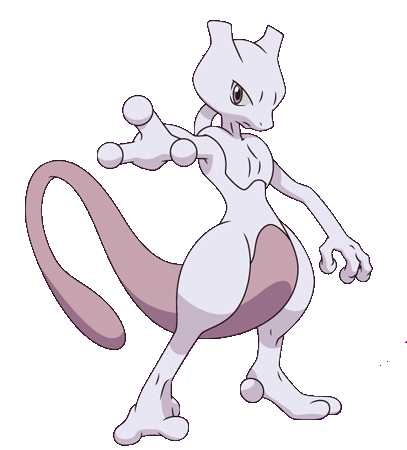 Yeah a Pokemon one. I know that with Pokemon, you either get it, or you don't, it's a generational thing. Unlike most Pokemon, Mewtwo has a distinct personality and a complicated back story; having been created in a lab and battled with his own desires to conquer and destroy. Mewtwo walks that wonderful line of villain-hood where he is forced into being a hero on occasion, which he proves better at than being a destroyer, much to his rage. To me, in my "Head-Canon" the idea of cramming Mewtwo into a Pokeball is laughable, he's a force of nature, and you'd better hope that he's on your side when it comes to the crunch. 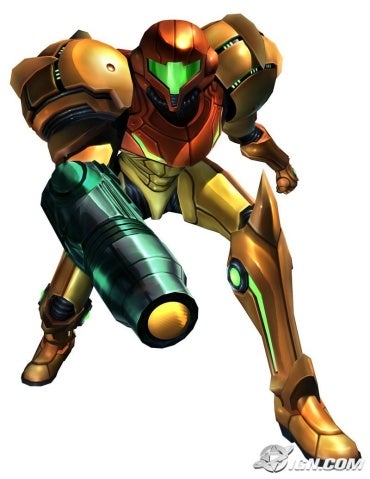 I haven't played many Metroid games, but I have a soft spot for Samus; the bastard daughter of Ellen Ripley and Tony Stark. Like all Nintendo characters, Samus has had a grand destiny built upon her in recent years, but back in the day, she was just a damn talented bounty hunter with the bad luck to keep getting caught in the middle of an alien holocaust. Forget the sexed-up "Zero Suit", I want to see an armoured Samus blasting away Skrulls on my table one day, hoping she gets paid for saving the day yet again.

Why has there never been a Megaman/Astro Boy team up? In the distant year 20XX, the evil Doctor Wiley attempts to conquer the world with his invincible Robot Masters; the only thing in his way, Doctor Light's robot boy, Rock. Endlessly adaptable, almost indestructible and (depending on how you read Bob and George), pretty stupid, Megaman has been a gaming icon for decades, and has always had that superhero edge to his story. Not sure how his various powers could be represented, but I think he'd be a popular addition to any games featuring Metallo or Ultron.
Posted by Hat Guy at 6:41 PM No comments:

Another batch off the painting desk: 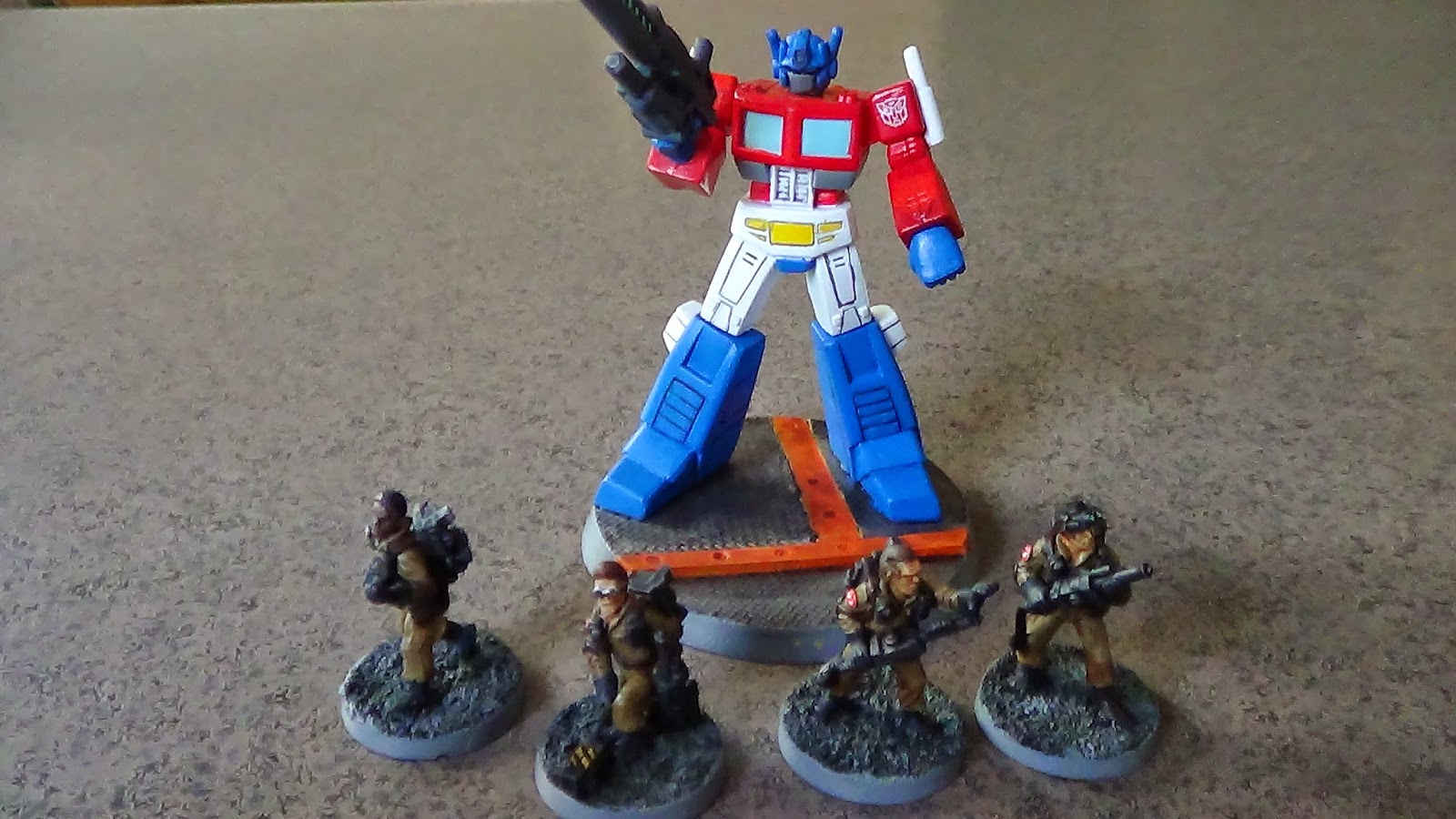 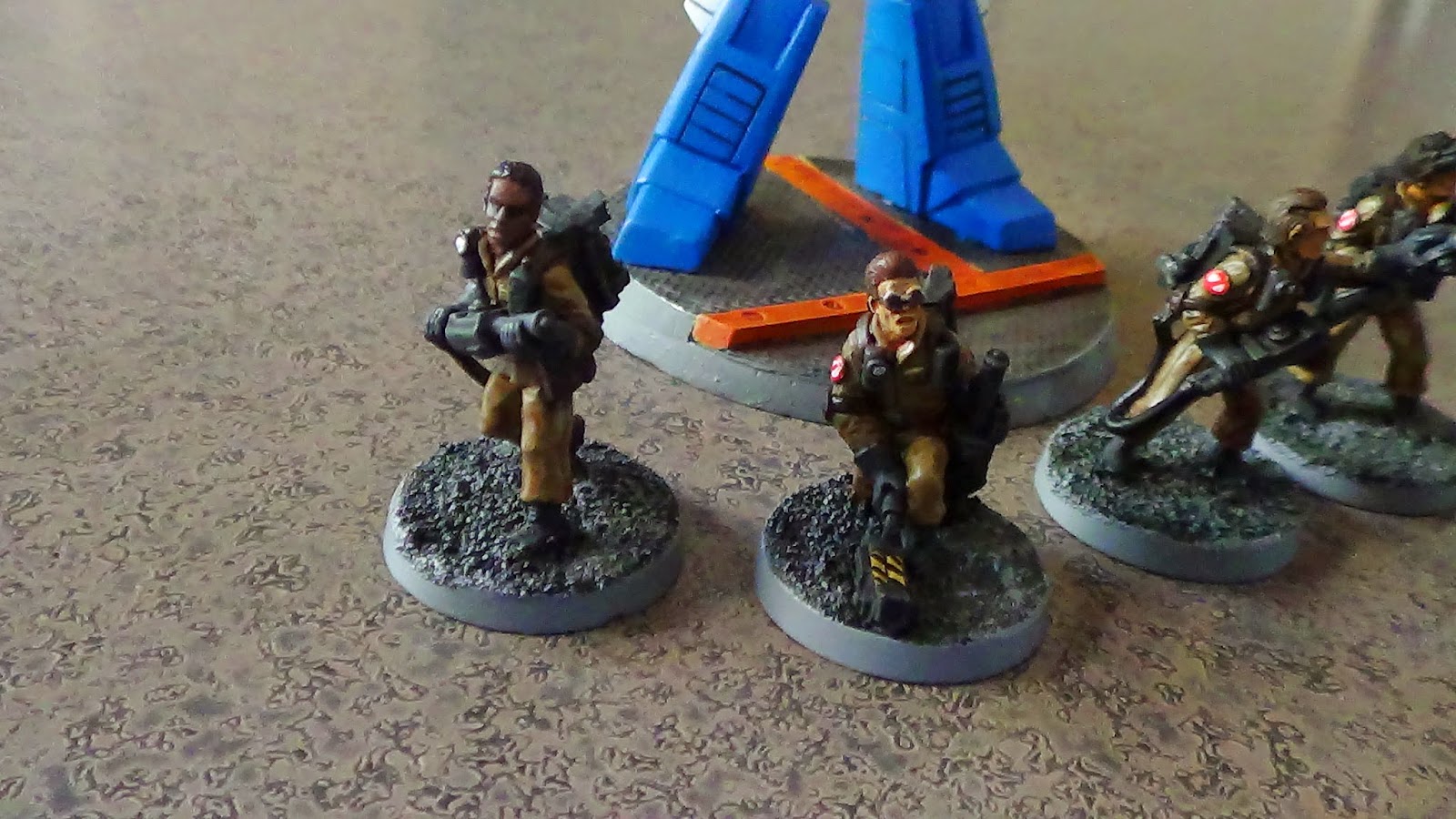 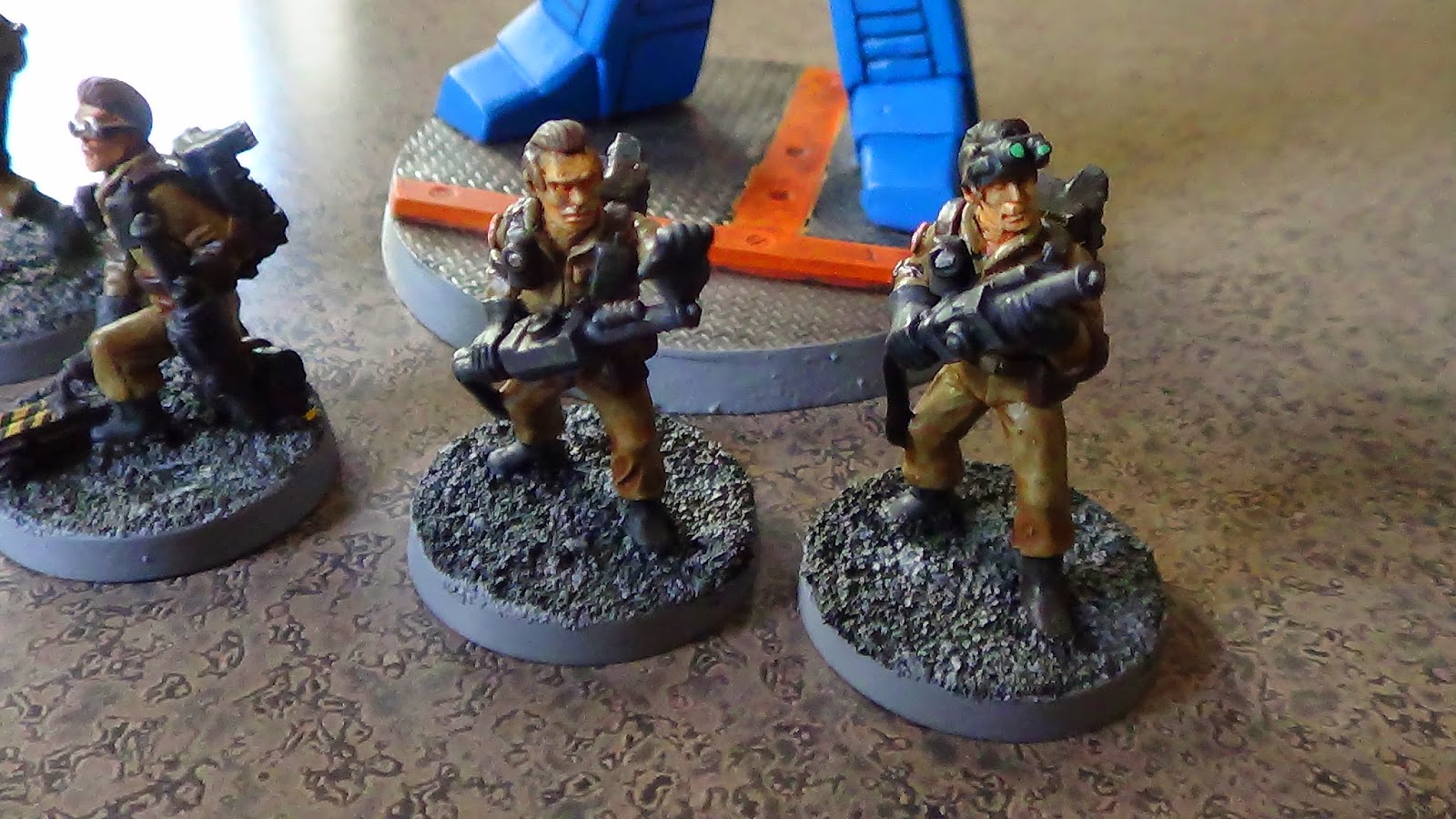 "Ray, if someone asks you if you have the touch, you say yes!" 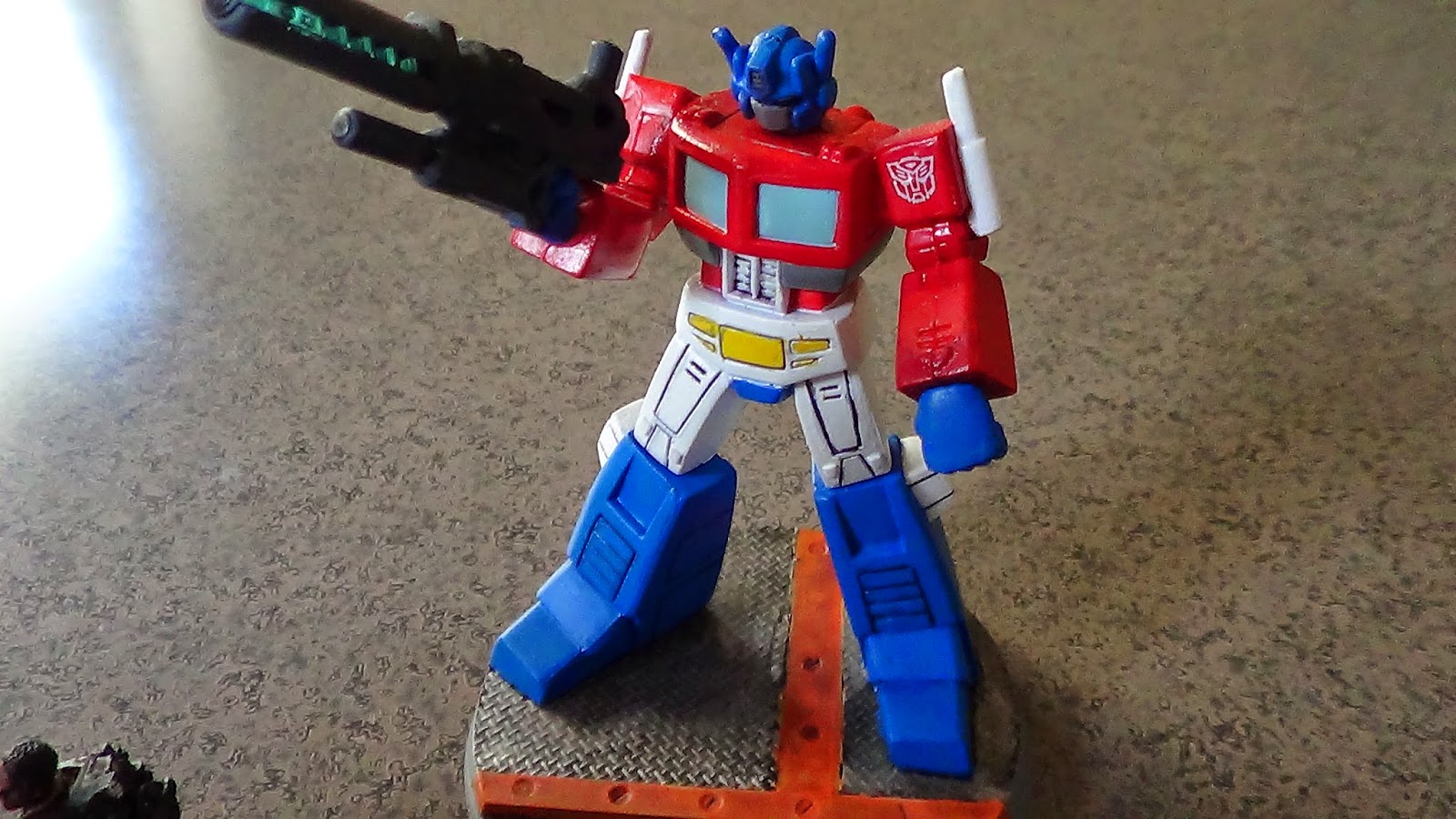 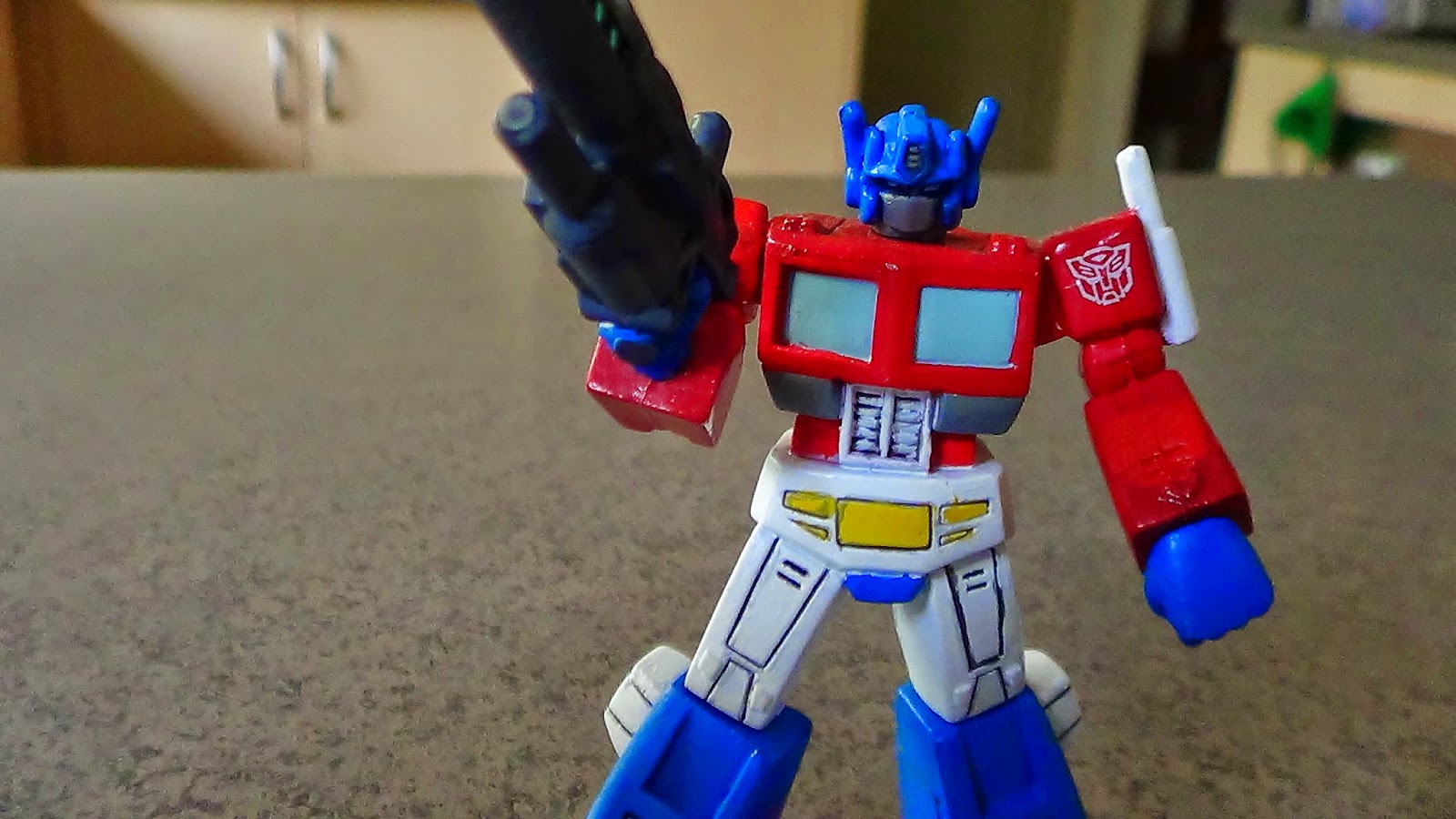 "Ghostbusters, Transform and roll out!"
Posted by Hat Guy at 2:53 PM No comments:

Just put the finishing touches on the Anti-god, the antithesis of life, the unquenchable hunger; Galactus. 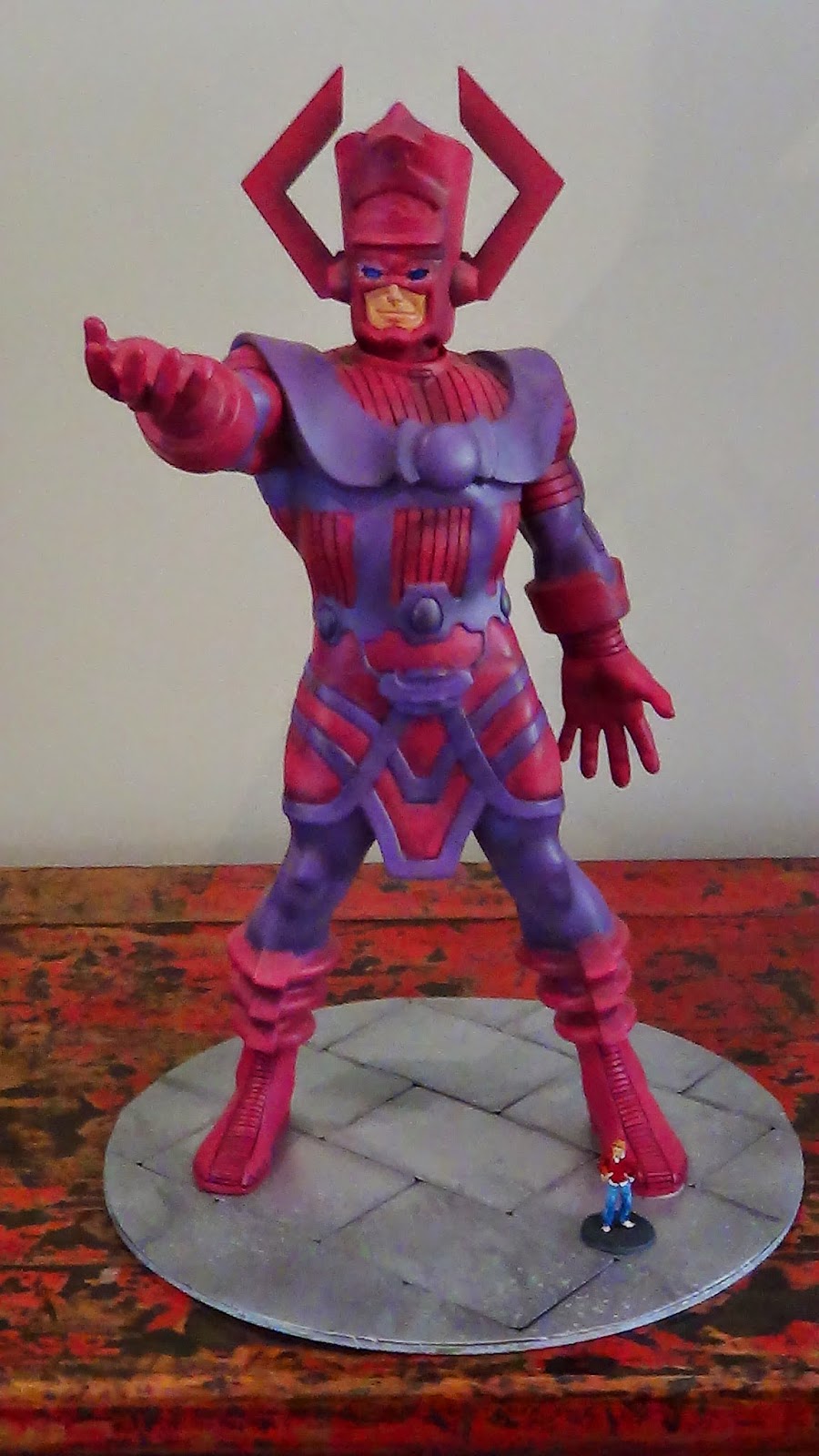 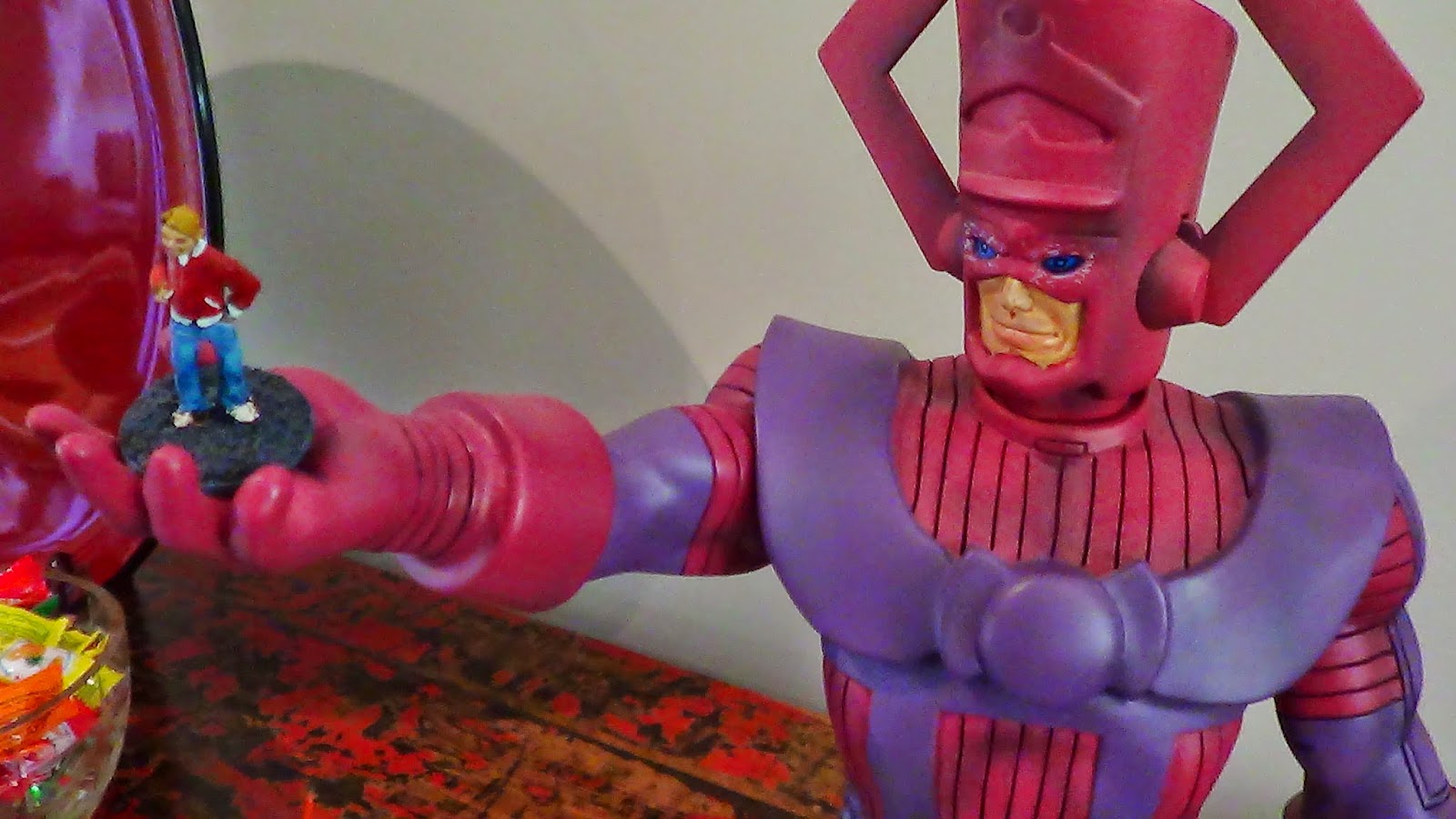 The mini with him is a Reaper 28mm Civilian for scale.
Posted by Hat Guy at 9:30 PM No comments:

Miniatures [and terrain] Finished: The Vision and Ozymandias burn rubber.

It really feels like I'll actually get everything done in time for the first time since I started this insane project. 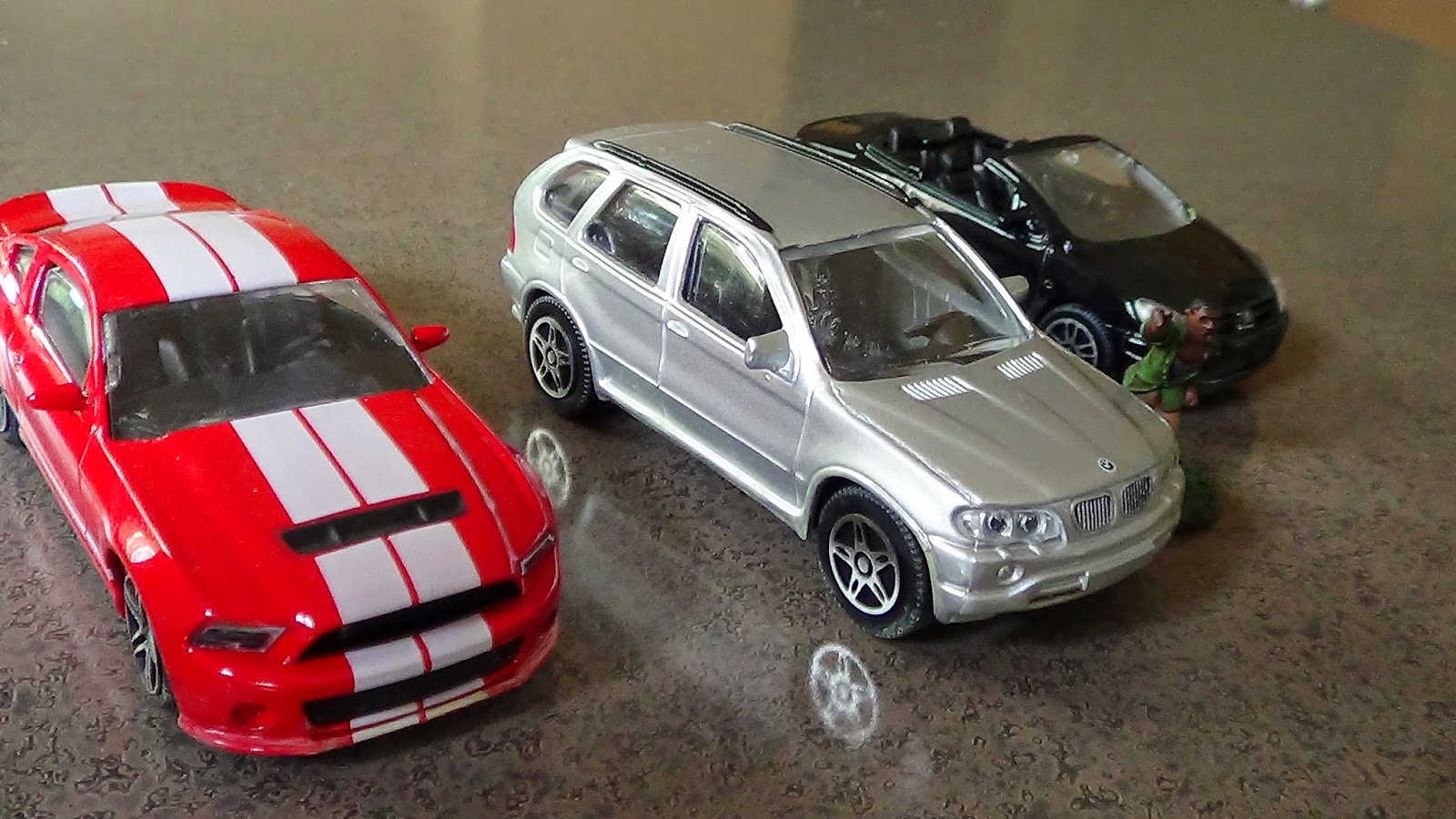 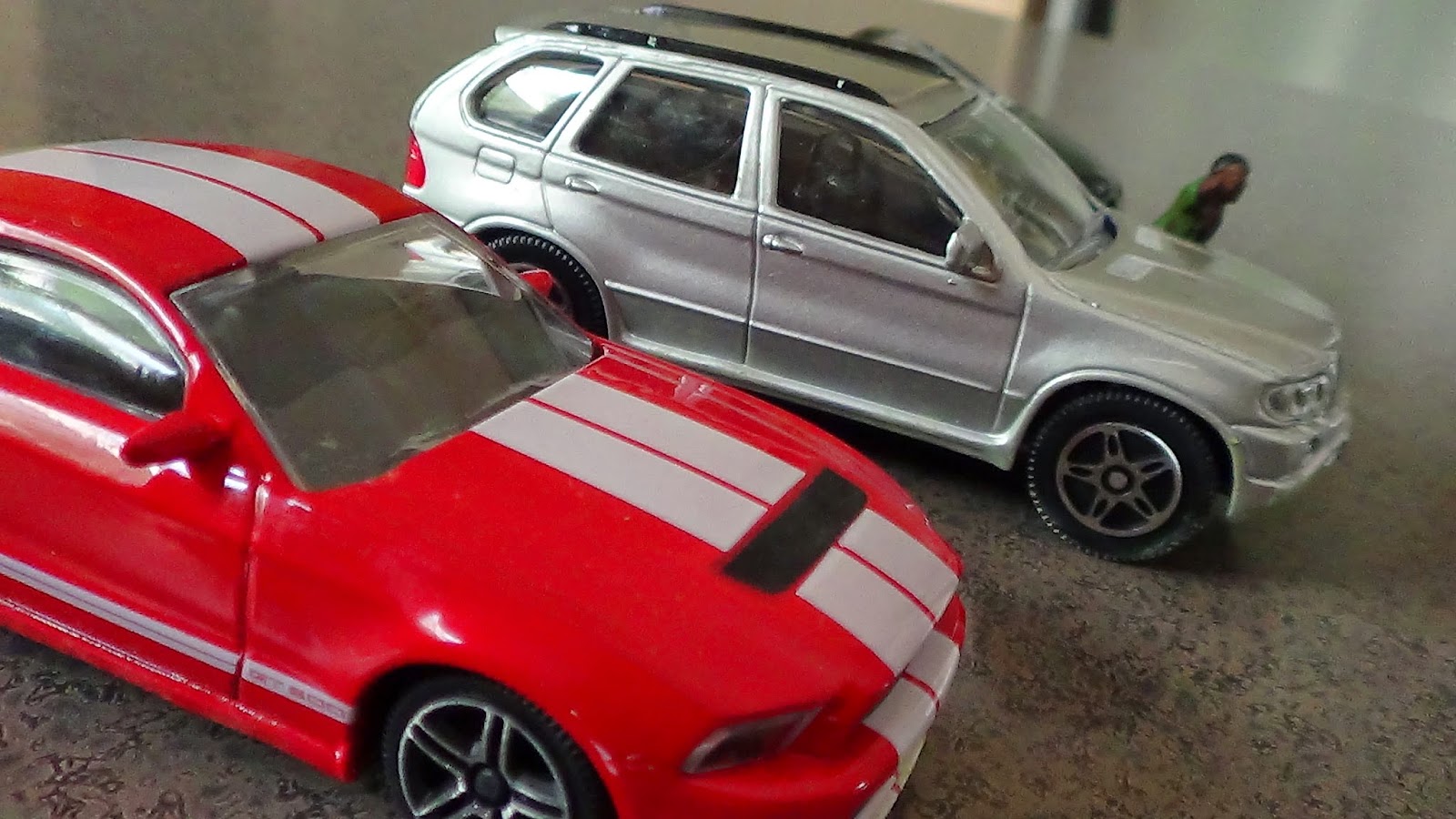 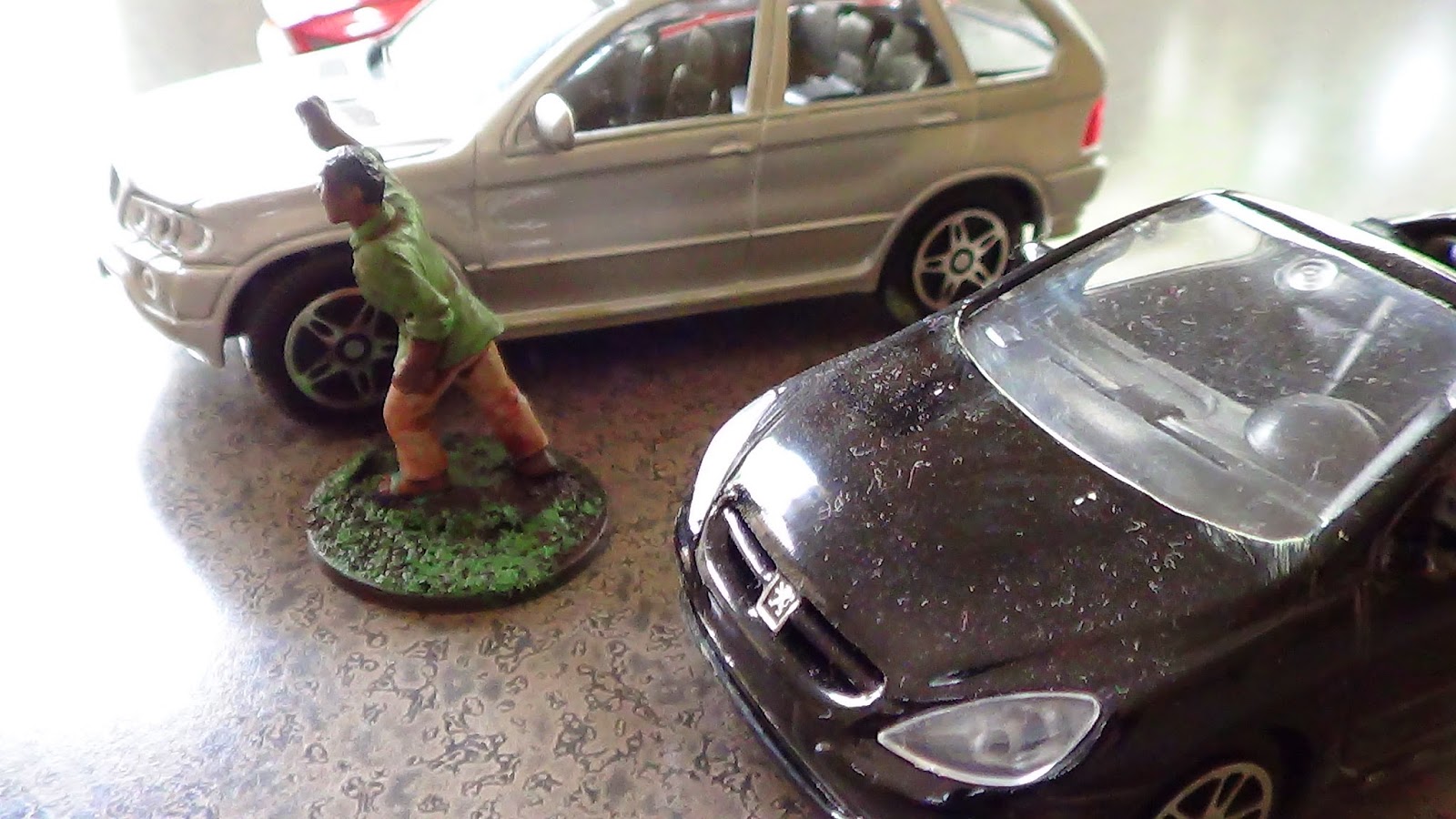 Eureka African civilian and some cars from Toys 'R' Us. These will be the last of the 'ordinary' cars I get. Still going to grab a couple of commercial and utility vehicles. 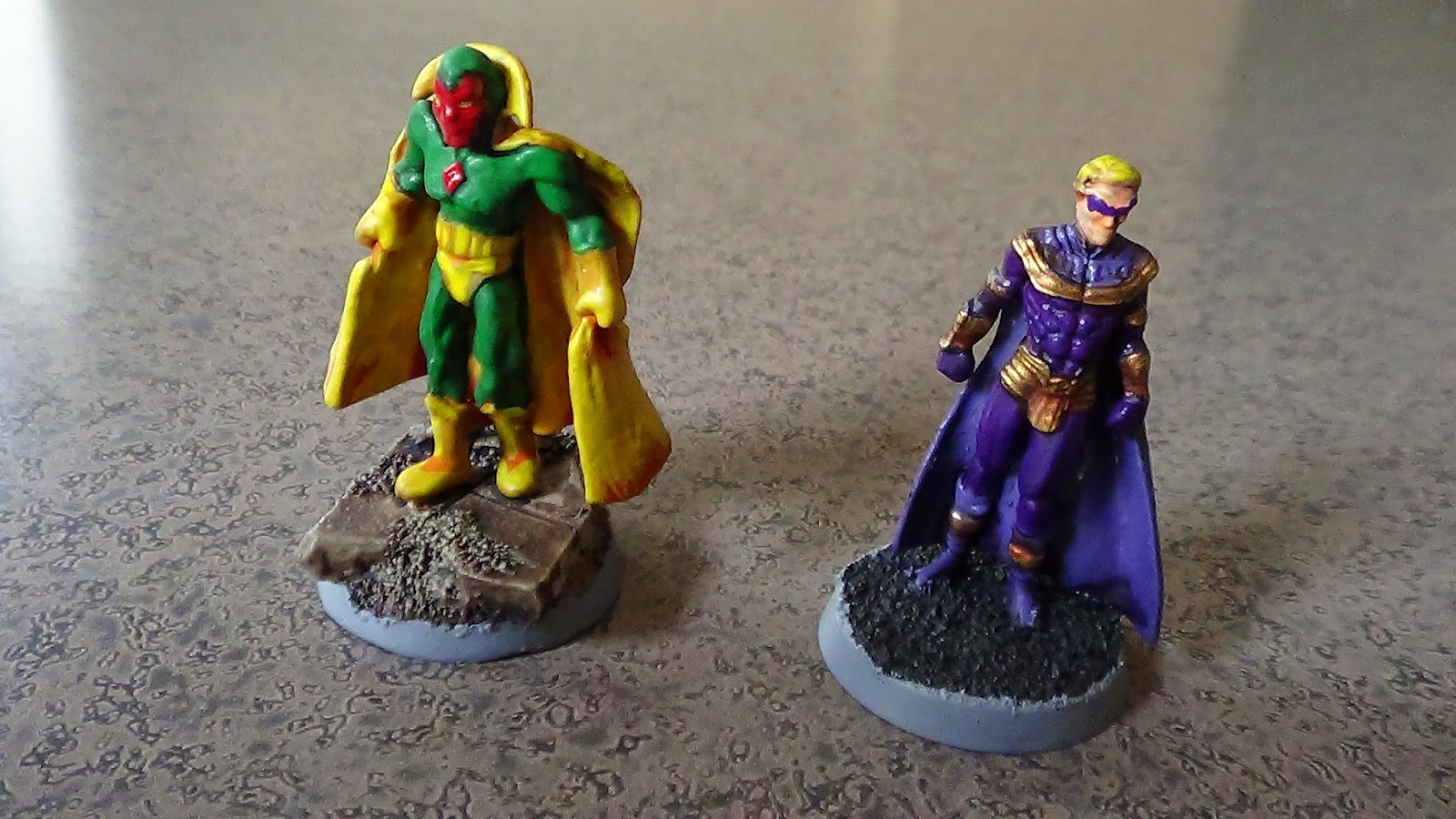 The Vision and Ozymandias. Really had to force myself to finish Vision, it's an awful damn colour scheme. I also really wish there was a set of Watchmen minis that look like the comics rather than the film. I hate the damn film.
Posted by Hat Guy at 3:07 PM No comments:

Ok, so this one's a little odd, so stick with me. Scanners is a cult 1981 Horror film by David Cronenburg in which "Scanners", people with psychic powers are secretly recruited and trained by major drug corporations and sent out to kill each other. With the signature Cronenburg plot twists and extreme violence, this is surely no fodder for supers right? Psychic Powers including telekinesis, telepathy, pyrokinesis, mind-jumping and mind control certainly all have their place in Superhero adventures. Monolithic drug corporations experimenting on unborn children to create an army of super-soldiers and a villain with a freaky scar on his head caused by self-experimentation. Sounds like a good start to me.

As well as being VERY Cronenburg, Scanners, in trying to evoke the futuristic and the bleeding edge, is also very 1980s. Even considering adapting the story to a more "traditional" Superhero setting still evokes that Iron Age feel. Say Rand Industries discovers that Parnival Plunder is attempting to artificially produce mutants to sell to Rouge States, or something along those lines. Even Darryl Revok, the villain, though he's really just the worst of a bad bunch, wants to use an army of psychic super soldiers to carve an empire that will rule the Earth. Just stick him in a goofy costume and he's ready to take on the rest of the long-underwear crowd.

I watched Scanners because I'm trying to get more into horror, a genre I've never been keen on, but would like to build an appreciation for. I was actually painting Superhero miniatures as I was watching the film, so it was a nice surprise to see some ideas I can use. Probable more for supers roleplaying that wargames, but I could see elements appearing in a campaign.