5 characters I want in the next Smash Bros game

The Nintendo Switch is here and games not featuring Zelda or new characters we don't care about are on their way. We haven't quite hit the point yet where every video game YouTube idiot is "speculating" on the roster of the next Smash Bros game, because we all know that there's one in the pipeline. That enables me to do the honest thing and just writing fucking a wish-list with no pretension to having any inkling as to what Nintendo may be thinking at any given time. These are characters that I, personally, would like to see in the next Smash Bros game and are, for the most part, pretty damn possible. (Seriously, who keeps demanding Goku in Smash?) 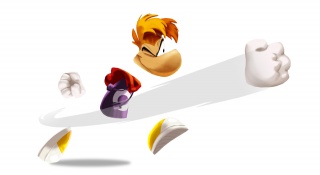 Something of a case of a character that should have been in Smash already, Ubisoft and Nintendo have been close collaborators since the Wii, and Rayman Origins and Rayman Legends were great games. Rayman may have had a poor start in gaming, but he has endured to headline some great games and has the perfect cartoon look and move set to fit in the Smash franchise. Also Globox as a clone character would be nice.

Simon (or any) Belmont 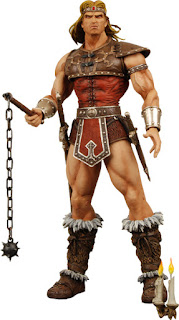 I never really got into the Castlevania series, but I have been enjoying the Netflix anime and recognise the importance of the franchise in gaming history. I imagine that a Belmont would be a heavier character with a diverse set of moves befitting the array of weapons that can be found and equipped in the games. God forbid they do another "Shadow Emissary", it would be cool to introduce Belmont tripping over Link as they both raid Ganon's Fortress. Belmont also opens up the option of an overpowered Dracula joining the roster at some stage. 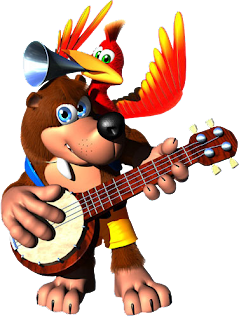 For the N64 generation (like me) Rare's endless parade of 3D Platformers were a vital part of our childhoods and their departure from the scene is a little bit tragic. The return of Dixie Kong to the Donkey Kong franchise does bode well however, and if Nintendo and Rare can get their shit together, Banjo and Kazooie are much-needed on the Smash roster. Transforming Banjo, grenade eggs and golden feathers give the character (yes, they're one character, not two, in Smash terms) plenty of move options and maybe Grunty can join them down the track. Just please, don't put in Mambo, he reads as pretty damn racist, even with the pink, fuzzy feet. 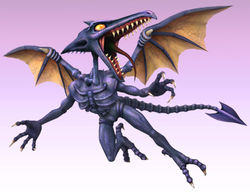 Yeah, fucking Ridley, I'm sick of the stupid justifications for keeping him out of Smash, except as a level hazard. "He's too big!" cry the idiots. Well Kirby is only 8" tall and Ganondorf around 7', so clearly they don't stick to any damn scale. Ridley is an iconic villain and with all the damn Mario franchise characters clogging up Smash, we need another Metroid representative. Sure, he'd be big, but think like, King Dedede size, but lighter and quicker. Something like a less controllable Greninja. What you want Baby Mario or something else instead? Get real, nothing would be as cool as a giant, dinosaur, space pirate, cyborg. 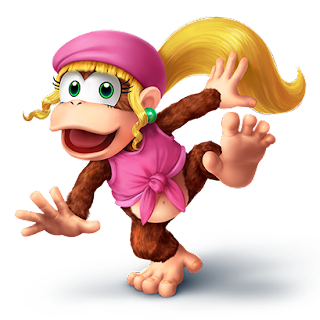 Smash needs more girls and few Nintendo girls kick butt as hard as Dixie Kong. She rescued both Donkey and Diddy with help from a toddler and can fly with a flick of her pony tail, sounds like real Smash potential to me. As with Banjo and Kazooie above, she's made a comeback and should get the recognition she's long overdue. There's always room for more monkeys running around, jumping and flinging fruit-based weaponry.

A friend told me that she had taken to "hate-watching" Arrow so that she could be up-to-date with any The Flash crossovers. I was, honestly, feeling a bit that way myself, viewing Arrow as painting time only; right up until the last few episodes put everything into focus. As well as featuring a surprisingly big battle, the finale also sets themes of self-actualisation and Oliver coming to accept who he is and the role he plays in defending the city. The sleek look of the programme, especially during the (increasingly tedious and unnecessary) island flashback sequences, continues to grate, I'm not sure why the style has persisted for so long, a more "Daredevil" look would suit the idea of a decaying city that is a continuing theme. That brings us nicely to the antagonist of the Season, Damien Dark, played brilliantly by Neal McDonough. 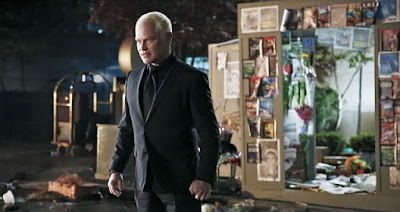 As good as Dark is, he does tend to dominate a bit, McDonough being a better actor than pretty much anyone else on the show except for John Barrowman, with the scenes between the two being some of the best in Arrow's history. Dark is also introduced a bit early, hurting the idea that he's the head of a massive organisation, what with his having to get his hands dirty all the time. There's also a buildup to a death of a member of "Team Arrow" that is foreshadowed far too long, almost as if the producers and showrunners were afraid that people wouldn't keep watching the programme without some kind of continuous "teaser" to bring them back each week. With a bit more faith in the material and a producer willing to take a small risk here and there, Season 4 of Arrow could have been the height of the programme before it really started to drag in Season 5. 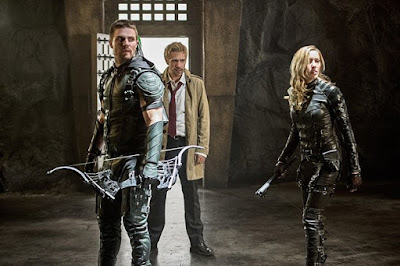 I haven't really touched on Oliver's run for Mayor or the Legends of Tomorrow crossover, but they play as filler more than anything, with no real resolution for either; yes, Oliver becomes Mayor, but only because of the death of his opponent. Oliver's relationship with Felicity becomes more of an irritation than anything, with her dumping Oliver every few episodes because he lies to her. Even ranting about honesty and betrayal when Oliver has only obfuscated the truth temporarily to save lives. Anarky is a recurring character, with a pretty cool look, actually, and more than the typical "bad guy" motivation, pity he's killed off and won't be returning. Season 4 is worth a look, sticking out until the final half-dozen episodes does pay off, even if it's not perfect. This marks the end of "Team Arrow" and would have been a good place to end the saga of Oliver Queen, but looks like CW want to milk this turnip a little more yet.
Posted by Hat Guy at 4:48 PM No comments:

At NWA this year, a 1970s African Bush Wars imagi-nation campaign has started up, and whilst most of it consists of posturing and name-calling in our Facebook group, some games are happening. Naturally, I couldn't resist getting in on the action with a perennial favourite, Wakanda. Having gone out and spent a massive $25, I present my 20mm "Weird Bush Wars" Wakandans. 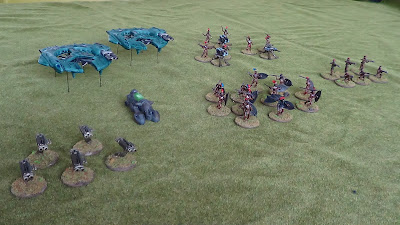 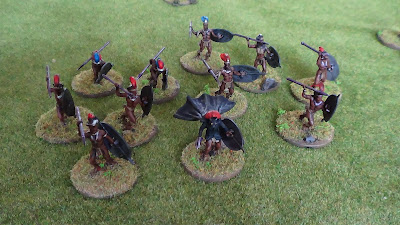 The Black Panther leads warriors of the Panther Tribe into battle. 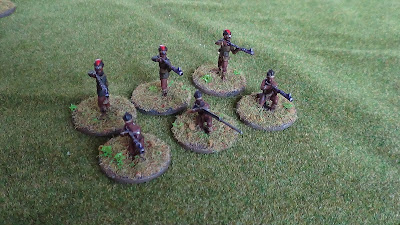 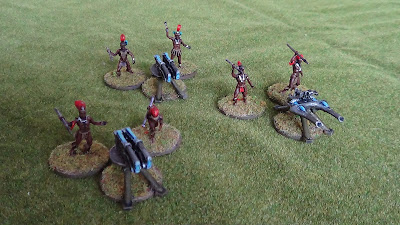 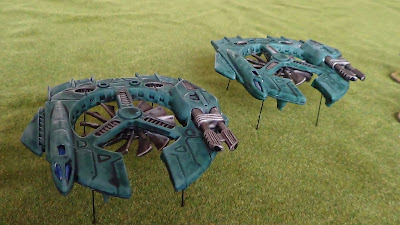 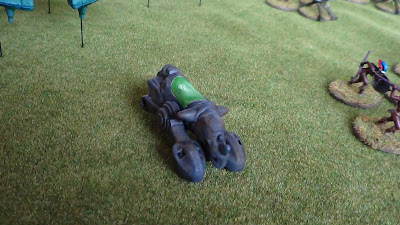 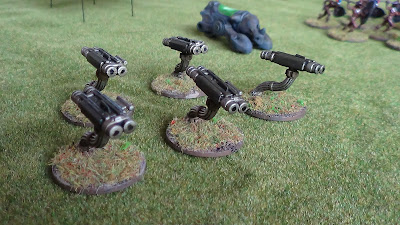 Sentry guns protect the border of Wakanda from incursion.

Yeah, "Weird Bush Wars" was not a project I was expecting to do, but painting and collecting the army was fun and pretty cheap. Hopefully I can get some games in at some point and see how they go.
Posted by Hat Guy at 5:17 PM No comments:

Thinking Out Loud: The Strongest Humans

So I'm currently watching through Season 9 of Dragonball Z again for my "Superhero Media", and I came across a really interesting part that I had forgotten. During the fight between Vegito and Evil Buu, there is a cut-away to the planet of the Grand Kai that shows King Kai watching the fight; he is relieved that the fusion is working and tells Krillin to stop training. Krillin makes an offhand comment about not being much use in the fight anyway, and King Kai shoots him a look and grin that speak volumes. Yamcha is there training too, and is beating Olibu without powering up. So the question becomes, could Yamcha and Krillin have defeated Evil Buu? 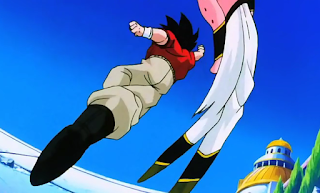 Now I know that most DBZ fans will be snorting and saying "of course not", because Krillin and Yamcha are two of the biggest punchlines in the programme, but bear with me on this one. Way back in the Sayian Saga, Yamcha and co are killed off pretty quickly, but a matter of weeks[?] later in the Frieza Saga, they have been trained by King Kai and are able to defeat the Ginyu force without much trouble; the same Ginyu force that nearly killed Vegeta, who had enjoyed a couple of Zenkai boosts since fighting Goku. King Kai must be one hell of a training coach to see that much improvement in such a short period of time, and keep in mind that Yamcha and Tien have no innate abilities like the Sayians and Nameks. So when the whole damn universe is on the line against Majin Buu and King Kai has all the warriors of history to call upon, who does he decide to train? Krillin and Yamcha. Two fighters most fans of the programme consider to be nothing more than comic relief. 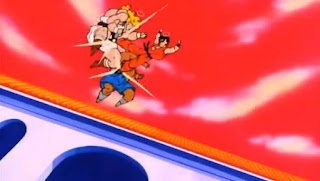 Admittedly, I'm drawing something of a long bow with this one; I only have a couple of scenes to back up my contention and I'm up against the weight of Krillin and Yamcha's history of defeat. Also, later on in the saga, the pair can't hold a candle to Kid Buu, but that doesn't necessarily invalidate this idea. I like when stories take unexpected turns, and this would have been a hell of a twist. The Sayians and their fusions have been defeated, so King Kai sends in the two most human members of the Z-Fighters to get the job done against an ancient evil that can kill gods? That would have been pretty spectacular. Maybe there's a fan manga or something that explores this possibility, or maybe I'll have to write it.
Posted by Hat Guy at 5:27 PM No comments: