Did you know that Marvel Studios did a series of direct-to-DVD films about some of their heroes in the early 2000s? In many ways they feel like test runs for the live action films that would follow, especially Iron Man and Doctor Strange. Stephen Strange is a brilliant, but egotistical, surgeon who only cares about his near-perfect record and high-profile cases. Secretly, he is haunted by being unable to save his sister's life and takes out that anger on those around him. When a college shows Strange a series of children in a mysterious coma, the flashbacks to his sister's illness distract him and he runs his car off the road. The rest of the film folds out pretty predictably from there; broken hands, the Ancient One, road of trials, Sorcerer Supreme, showdown with Mordo and Dormamu. 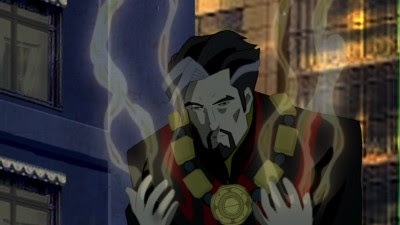 Frankly, I think the twist reveal is better in this version of Doctor Strange than in the MCU version. Dormamu is attacking the Sanctums as a distraction, his true plan is entering our reality through the dreams of the children in comas all around the world. Mordo advocates killing the children, but Strange and Wong can't conscience that kind of thing and Mordo defects. Also, in this version, Strange becomes the Sorcerer Supreme because of an inherent ability to absorb and redirect his opponents' spells, rather than "destiny". I'm not saying that the animated film is the better version, rather that both have their merits. The animation is not brilliant, the performances passable at best and the plot is pretty predictable, it's obvious why these films never challenged the DCAU's domination of the market. 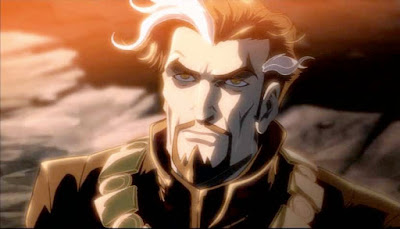 That's not to say that Doctor Strange isn't worth a look, it's pretty good in places and at least serves as a concept of where the MCU may have gone in an alternate universe. I'm not sure what an MCU led off by Doctor Strange, Iron Man and Hulk would have looked like, but it is kind of fun to think about; I doubt that we'd be ten years in at this point and looking down the barrel of Captain Marvel. I had this on DVD from years back, but I'm fairly certain it's on Netflix if you feel like checking it out. Not much more to say here, it really feels like this has been superseded and is of no real consequence anymore. Shame, some effort went into it, after all.

As many of you will know, I do the best I can to cram superheroes into every miniature war game possible, partly because I never get to play as many Superhero games as I want to, but it's also become something of a joke with my gaming peers. So far, I've worked superheroes into 1949 Secrets of the Third Reich (Captain America, Union Jack, the Howling Commandos and Red Skull), Warpath Firefight (Colonel America), Empire of the Dead (David Lo Pan and the Lords of Death), Frostgrave (Guardians of the Galaxy) and have just finished my Red Ribbon PMC for moderns. I also have my Latverian army (primarily for SotR, but works in other games) and a growing collection of Skrulls.
The big "setting" that I've never been able to figure out a way to get supers into has been Warhammer 40,000, as the tone just doesn't work. Sure, there are Grimdark superheroes, like The Darkness and Spawn, but they never really did it for me, and other than just making them another interpretation of Chaos worshipers, there's not a lot there to play with. As I've been playing some Kill Team lately (great game), I got thinking on this again and finally came up with a solution; Deathwatch but Asgardian heroes! 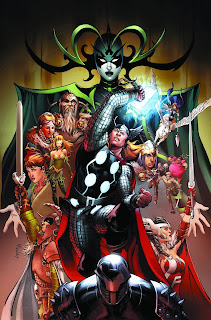 It makes pretty good sense on the surface, powerful Space Gods with magic weapons become powerful Space Marines with a variety of exotic weapons. And the conversions are petty easy, Deathwatch Plastics with the odd Heroclix head and some reworking with parts from my endless box of bits. I started with ideas for Thor, Heimdall and The Warriors Three, but I'm already looking at Sif, Loki, Tyr, have built a Beta-Ray Bill, maybe Odin and Balder down the line. Most of the parts haven't arrived yet, but I have managed to get a couple of games in to see if I like playing the team (which I do). Last Friday night, a friend and I played the Strike at the Heart mission from the Deathwatch Kill Team Box. 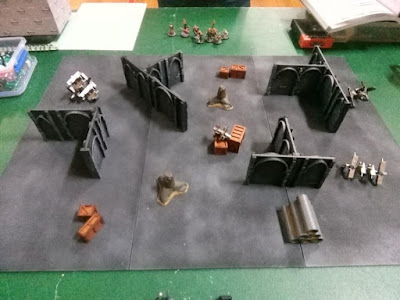 The battlefield for Kill Team is small, (22x30") which makes for fast and bloody games. 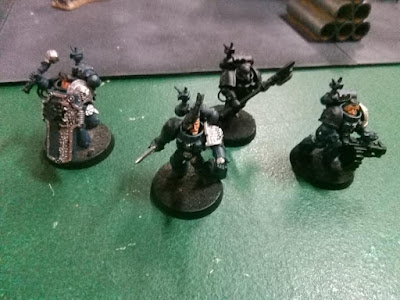 Kill Team Aesir is on the scene, (from the left) Hogun the Grim, Fandral the Dashing, Beta-Ray Bill and Volstagg the Voluminous. 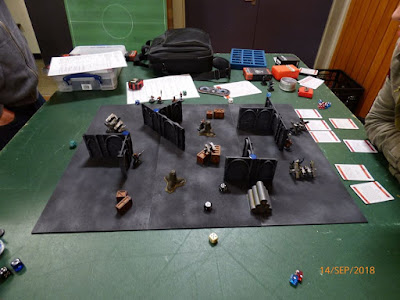 As we get our teams and terrain better painted, the games will be nicer to look at, I promise. 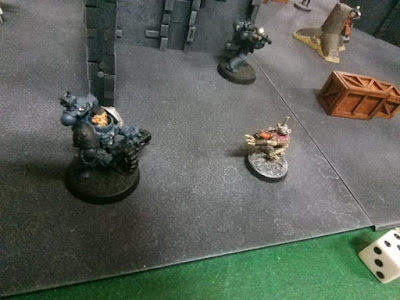 I didn't get a good picture of Benny's (really nice) Death-Cult Kill Team, for which he uses the Dark Eldar rules. This Acro-Flagellant (Wytch) did not stand up to the Deathwatch Frag Cannon very long. I'm glad that the weapon I chose because it 'looked cool' was also effective on the table. 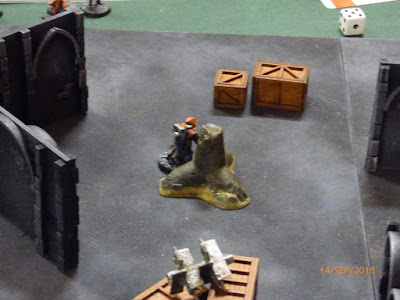 As I went for a more melee-orientated Kill Team (both Beta-Ray Bill and Hogun had no ranged weapons), I had to be careful to avoid the long-ranged shots of the Death Cult. Even Power Armour was not always enough to save the Asgardians. 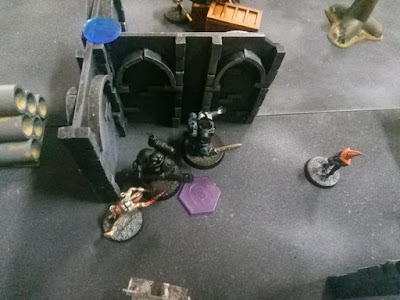 Fandral and Beta-Ray Bill held the objective bravely, but weight of fire brought them down in the end. 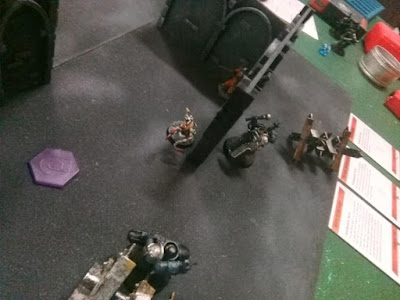 Volstagg and his Frag Cannon really saved me in the game, 2D6 automatic Strength 6 hits within 8" is pretty nasty. 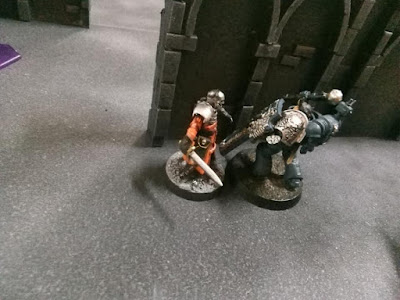 The game came down to a clash between the Radical Inquistor and Hogun, with his power mace. 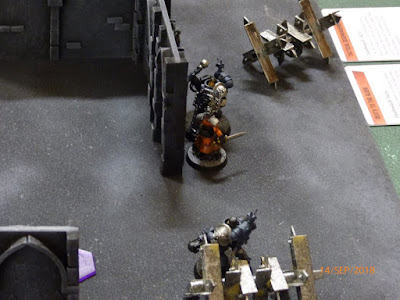 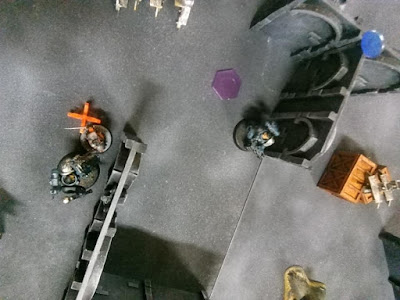 In the end, Hogun won the combat, which forced a draw, but Benny really won the game, he played much better than I did and had me on the ropes from the first turn.

Hoping to get more Kill Team games in soon, but work isn't helping and it will be a few weeks before the parts I need to finish Kill Team Aesir arrive. Next time, I'll try for a little more narrative as those AARs tend to be better received.
Posted by Hat Guy at 4:14 PM 1 comment:

Gantz is a sprawling franchise encompassing manga, anime, video games and cinema that I've somehow never come across before I started watching this film. So to any fans, sorry if I get stuff wrong, but I'm coming into this cold and my impressions are based on a total lack of previous exposure. The narrative, though not the film, begins with our protagonist dying in a subway spree killing and waking up in a strange apartment with a black sphere and several strangers in odd outfits. Turns out he has been chosen by Gantz (the sphere) and must fight monsters until he earns enough points to come back to life. The monsters, which attack major cities in Japan, are all traditional monsters from Japanese folklore, such as Kappa, Oni and Trolls. The strength of this film is probably in the representation of the monsters, they all look like traditional prints and woodcuts, but the stark lighting and CGI work makes them frightening. The heroes, on the other hand, are disappointing, as clearly more effort has been put into pleasing boob jiggle than making their faces move when they talk. 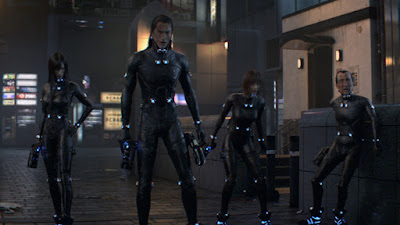 Odd little aside, because I do a lot of research into psychology, philosophy and literary theory in my spare time, I tend to keep "safe search" switched off, otherwise I don't find a lot of the deeper thought stuff out there. When searching for the images for this post, I found a lot of images of the female characters from this film (and the broader franchise) that would be considered pornographic, or at lest erotic, in nature. Sure, I find the same when I search up anything with a broad fanbase, but the ratio here was really high, enough that I'd comment on it. It's a shame that so much focus is on women in black latex, because the bones of the concept are pretty good. Those who die untimely deaths can earn their way back to life by defending the innocent from monsters, the framing device being something akin to a video game. When players accrue enough "points", they are given three options; leave the game and return to their lives, get a more powerful weapon or revive a fallen comrade. 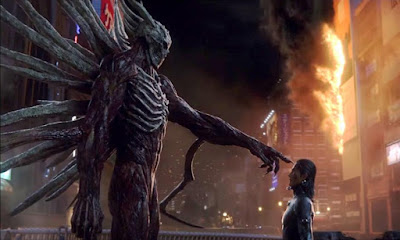 I may need to hunt down more of the Gantz franchise, as the bare bones mentioned above are a great concept for a role-playing campaign. Ordinary people, forced to fight aliens and monsters in an attempt to find their way back to the world of the living. I wouldn't be shocked if there was something like that out there already. Can I recommend the Gantz franchise on the back of Gantz:O? No, but I will seek out more to take a look at. I probably wouldn't jump onto this film unless you can get by on the concept and visuals alone, it creates more questions than it answers. Fights are still pretty cool though.

Dipping into the obscura now, character-wise. 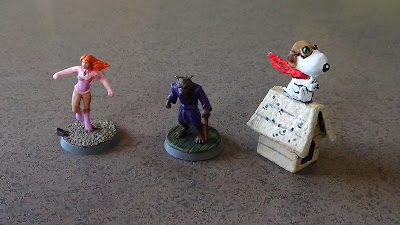 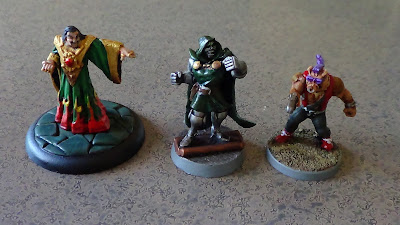 The Mandarin, Doombot and Bebop (all clix).
Posted by Hat Guy at 4:17 PM 2 comments: