Heroes chosen from across disparate time-lines, the heavens ring with the name, The Champions of the Omniverse! Defenders of the time-line! Heroes of many worlds! Champions of all that is and will ever be! Well, that's the idea, anyway, the reality is rather underwhelming. Chosen by Eon to patrol and defend all realities, the Champions were, unfortunately, taken from the wrong place[s] in their timeline[s], being far too young and inexperienced to get the job done properly. However, the forces of evil and chaos do not wait for the righteous to be ready, so the Champions are routinely sent out to do the best they can, often bumbling through somehow. 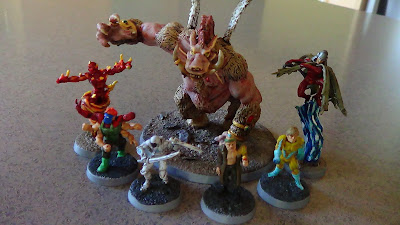 The Champions of the Omniverse!
(from left to right; Firenado, Spider-Strike, Koga, Manzilla, The Arsonist, Gigawatt, Sonic Tsunami)

The Champions of the Omniverse
Chosen from many branching timelines, the Champions are as a unique a combination of heroes as one can ever expect to find working together. When they manage to work together, that is. Which isn't often, to be honest. Yeah, they're not all that great, but what can you do, really? They're not really all that bad, more like '90s Avengers bad than 80s New Warriors, you know? Teamwork really isn't their thing either, thank the god the Eon is able to heal them after each mission, because they have a habit of coming back unconscious or dead. 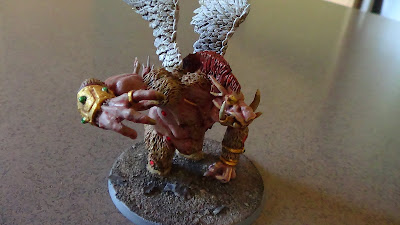 Manzilla: An ordinary dock worker until he was hit by a wave of experimental radiation, Manzilla is the muscle of the Champions, the densest being between his ears. True, Manzillia is not bright, but he is loyal, really strong and has a staggering array of powers, such as flight, atomic breath and a spine-shooting tail. Manzilla is better tolerated by many of his teammates because of his sheer utility in the kind of situations the Champions find themselves in, though his hygiene and lack of initiative do hamper his overall effectiveness. 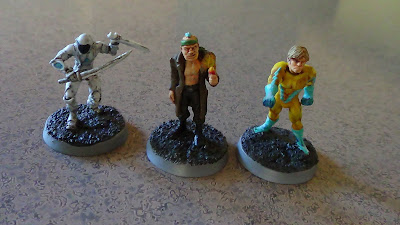 Koga (Infinity), The Arsonist and the Gregarious Gigawatt! (converted Heroclix)

Koga: If any of the Champions supported the myth up to which they are expected to live, it is Koga, or, in his native land, "Super Policeperson Team White Ninja Soldier Koga". Koga has saved the rest of the team several times, most notably from the machinations of Kang the Conqueror, typically with help from his light-bending powers. Despite being both a Ninja and a Super Sentai team member, Koga isn't much of a fighter and relies upon his powers in battle, often sticking to the back of the team and gunning for the MacGuffin of the week.

The Arsonist: From a time and place where superheroes were all supposed to be "Grim and Gritty", The Arsonist's origins are lost in a fog of retcons and contradictory wiki articles. As his name (and several before it, including "Firestarter") implies, The Arsonist can control and manipulate fire; to a degree. Mostly, he can make fires larger or smaller, handy when a teammate's powers are fire-based, but also useful when a member of a team that keeps getting caught in explosions.

Gigawatt: If the Champions had a leader, it would be Gigawatt, if only in his mind, at least. Gigawatt is from a more pure age, when heroes wore tights, drank their milk and only had to get their fists within a foot of their enemy before a large "BAM", "POW or "BIFF" hurled them backwards. As his name implies, Gigawatt has limited electrical powers, being able to throw bolts of lightning and redirect the flow of current. Mostly, Gigawatt can rely upon his fists and razor-sharp wits to fix any problem that he, and by extension, the Champions, come across. 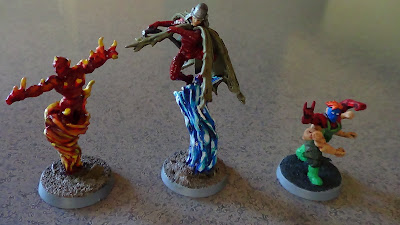 Firenado: When you can turn into a fiery tornado, your superhero name options are limited. A mutant born during the 1980-90s boom period, Firenado was quickly forgotten, despite a memorable name and fun power-set, he lingered around some background cameos for a while before the writer of "Champions of the Omniverse" thought he deserved another go. Able to fly, project flames and melt nearby objects, Firenado often teams up with The Arsonist for increased flaming death in a large radius.

Sonic Tsunami: Of all the Champions, ST has had to endure the greatest cultural whiplash being pulled from his original time, having been a superhero for the Japanese Empire in the Second World War. After some, rather confronting, "catching up" from Koga, ST has acted as the de-facto leader of the Champions when Gigawatt hasn't been looking, using his water control powers to aid the rest of the team in combat, often freezing the enemy and winning the day quickly.

Spider-Strike: In a time-line where Peter Parker was killed fighting the Green Goblin, four heroes rose up to take on the mantle of Spider-Man. The most extreme, or rather "x-treme", of these was Spider-Strike a new kind of hero with foil covers and lots of pouches. Pretty much none of the other Champions like Spider-Strike, he's a braggart, a grandstander and an idiot. Spider-Strike is constantly getting himself hurt, running off into danger and not being much use in a fight. Still, they have to keep him around because he'll apparently come good at some point. Still waiting...