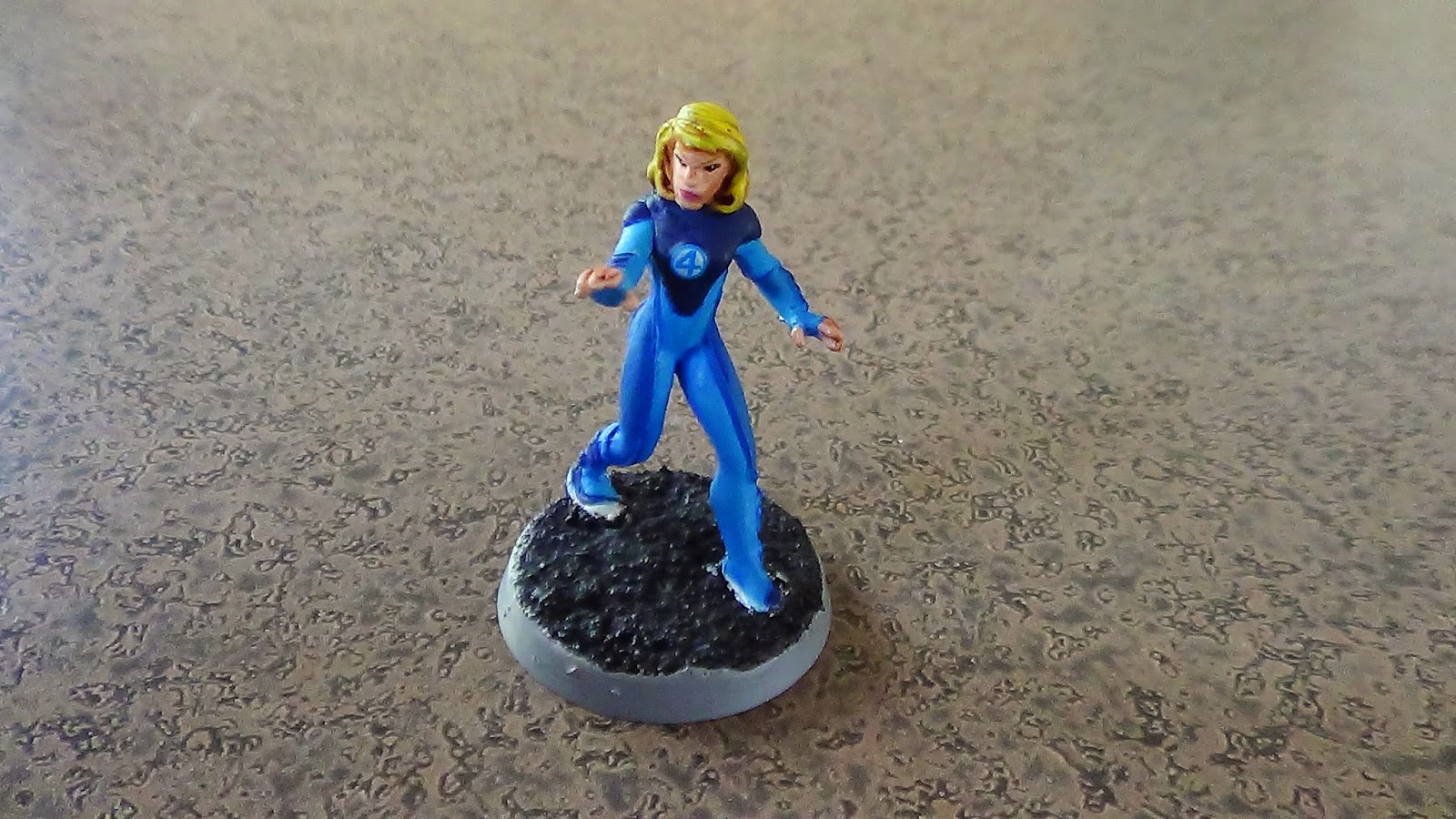 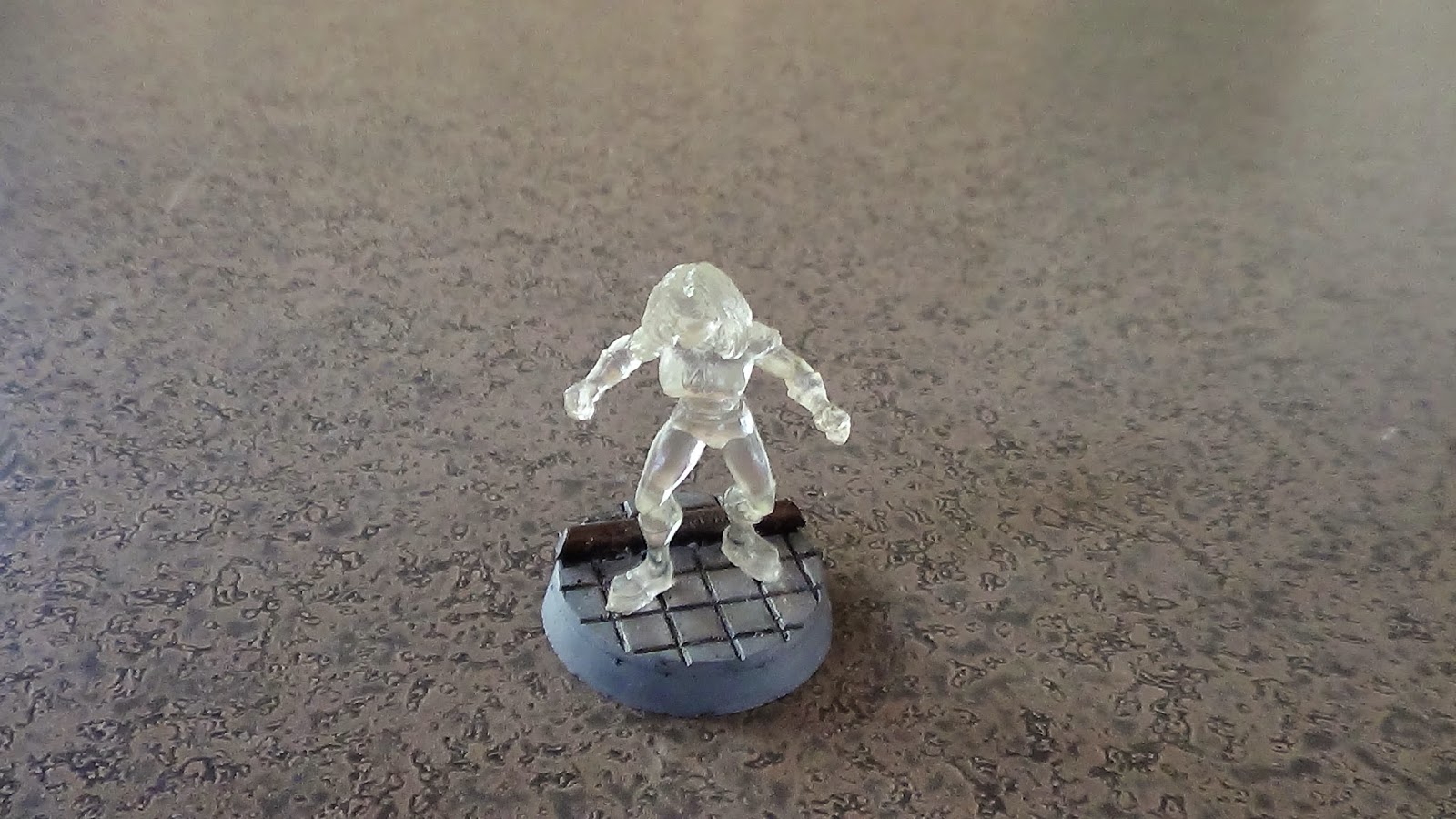 I have both a "visible" and "invisible" model, so that players can quick differentiate between being able to target Sue or not, much the same as I've done with Plastic Man and Solid Snake. 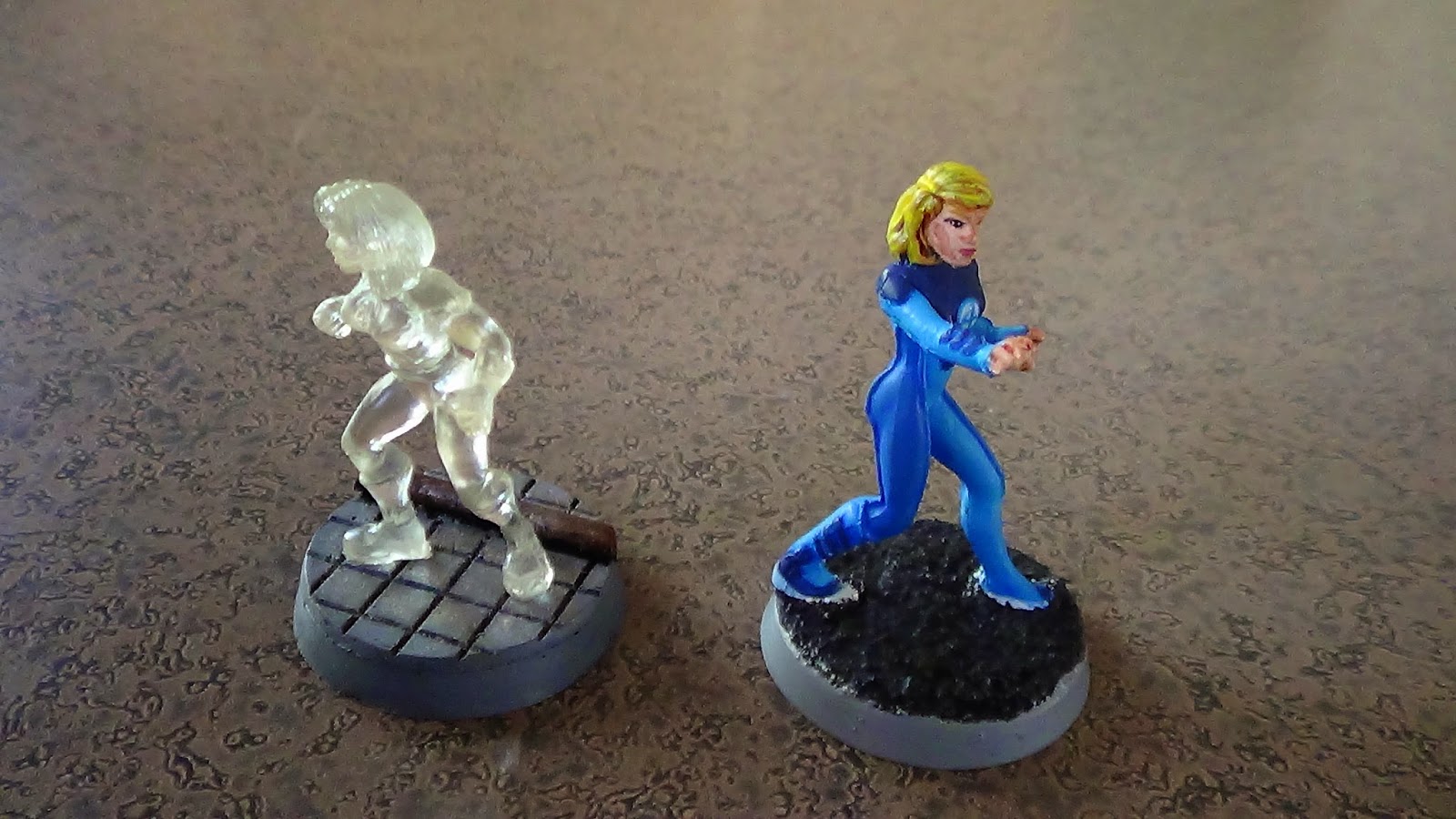 Admittedly, they don't look great next to each other, but that's rarely going to happen.
Posted by Hat Guy at 4:53 PM No comments: 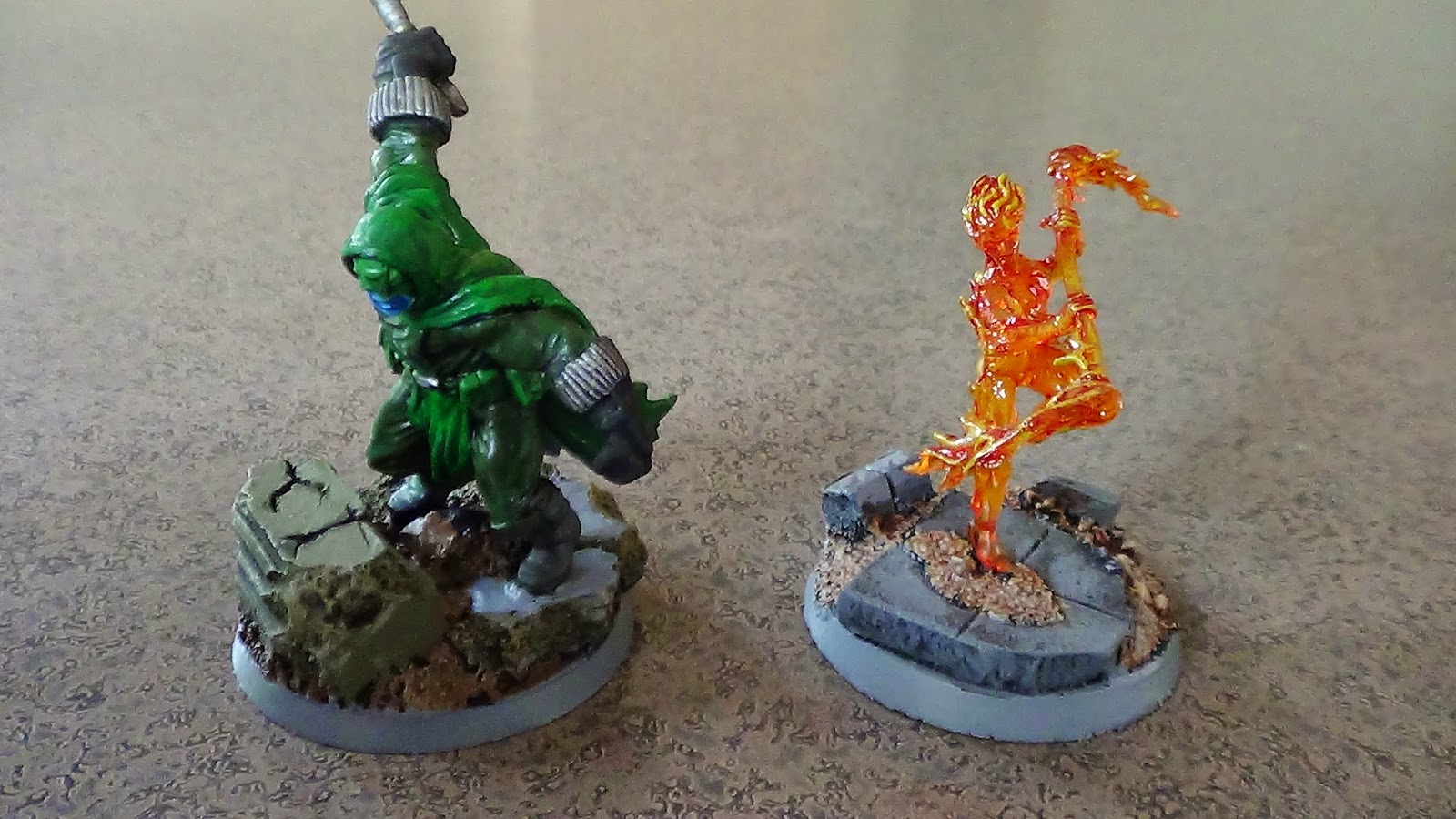 Ronan the Accuser and The Firelord, both rebased Heroclix. 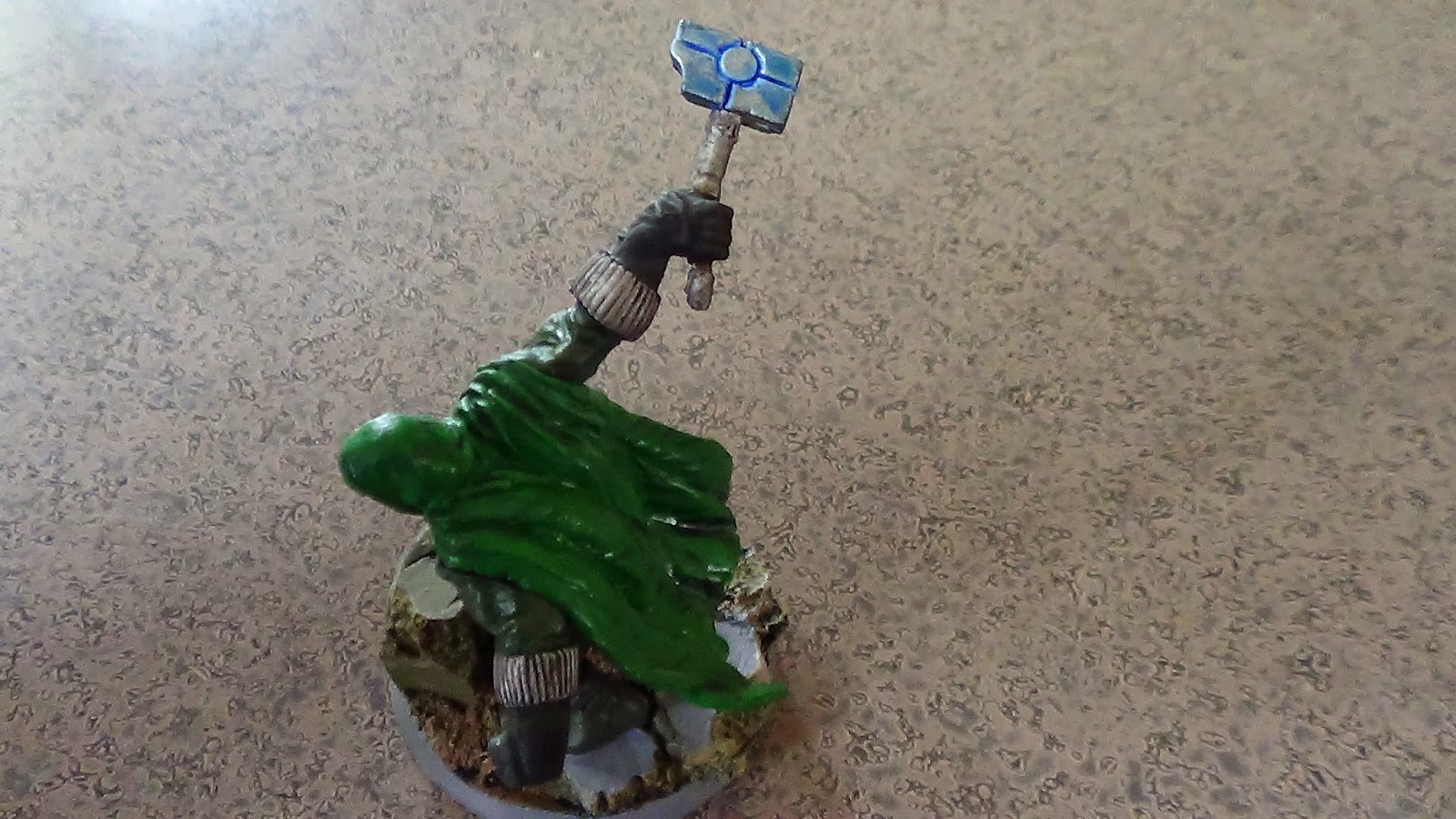 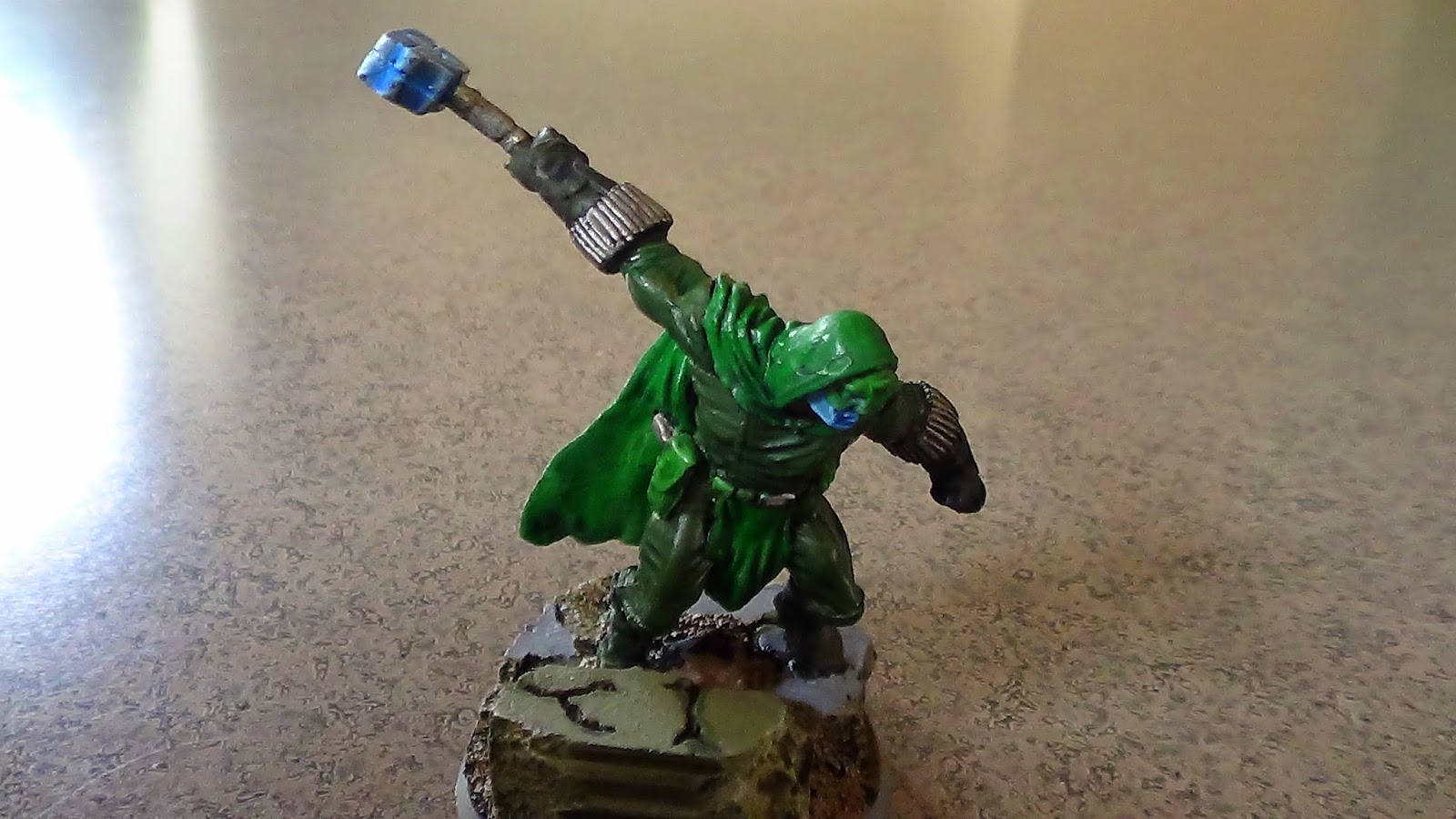 Ronan was a joy to paint, the sculpting is great for a clix and there's a real sense of movement in the mini. 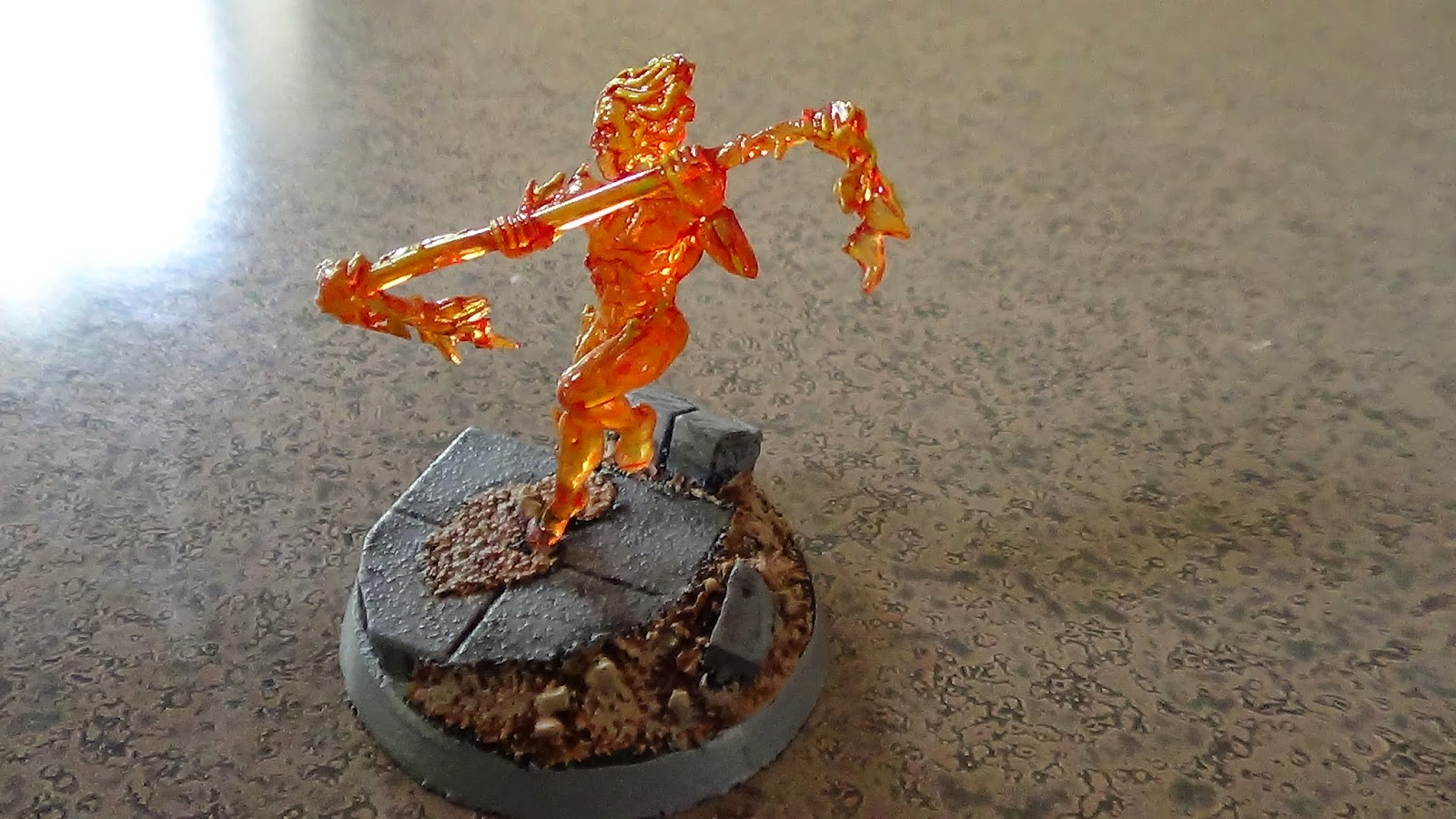 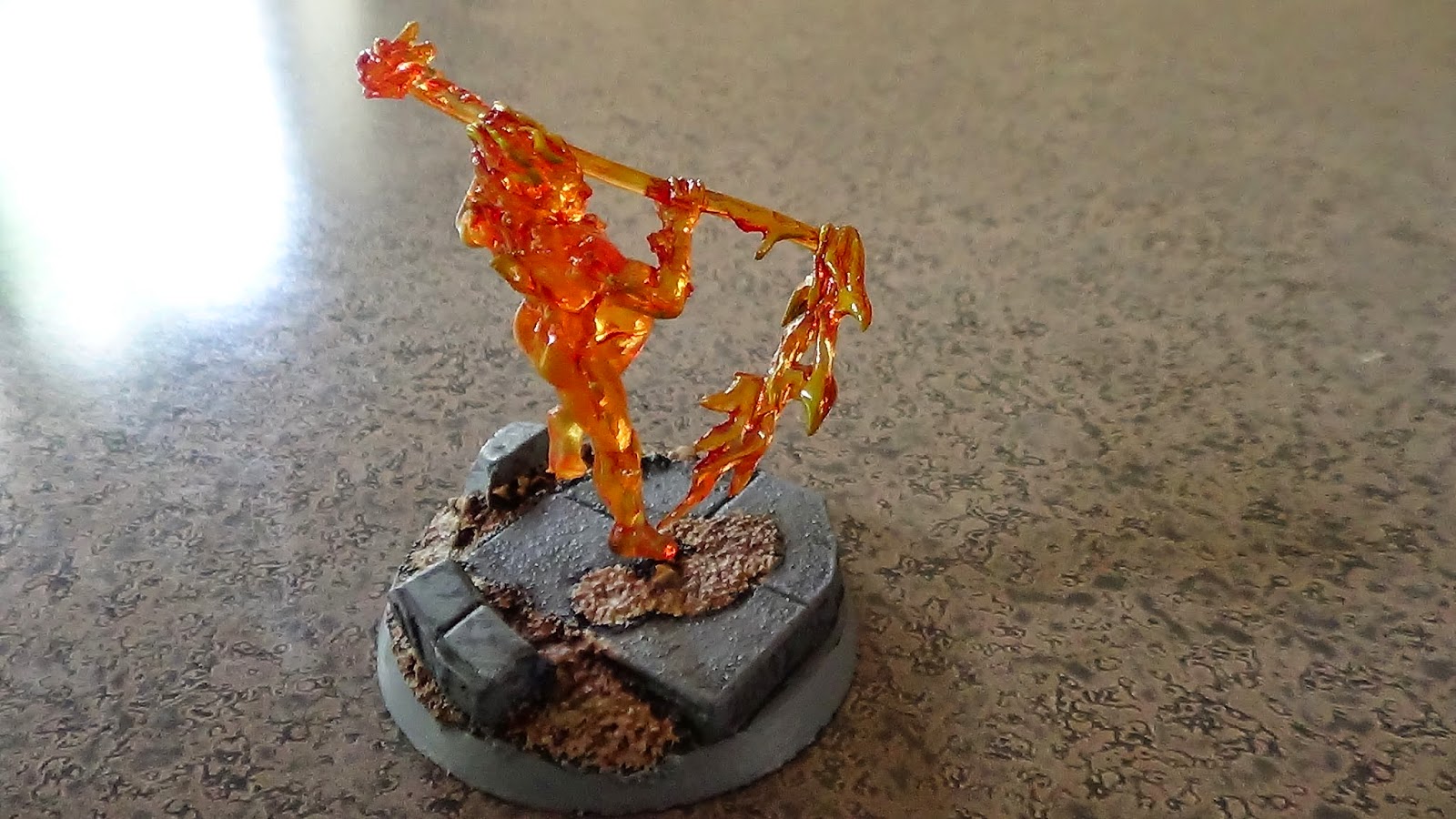 Essentially all I did for Firelord was rebase him, but I honestly think the Avengers-era Clix factory paintjobs aren't bad. Especially on these clear pieces.

7 Marvel Films I'd Like to See (in no particular order)


For those unaware, I did a minor in Film Studies at university, so cinema holds more fascination for me than most. Understandably, Superhero Films are something I really enjoy, and the rise of Marvel Studios has been a joy to watch. Rumors and leaks about the next series of films are near-constant, and the success of Guardians of the Galaxy has opened the floodgates on just what is possible to do in the medium. So, for a bit of fun, here is a list of seven productions I'd like to see Marvel Studios undertake in the future.

Jennifer Walters is a shy, mousy, unpopular law student just trying to keep her head down and get through college, until a bone-marrow transplant from her cousin Bruce Banner turns her into the Savage She-Hulk! Fast forward five years and She-Hulk (Jen or Shulkie to her friends) is a prominent lawyer, a beloved celebrity and one of the most desirable women on the planet. When Jen is fired from her law firm for partying too hard and crushing photocopiers trying to photocopy her butt, she is picked up by a prestigious law firm (Goodman, Lieber, Kutzberg and Holliway) to help them practice Superhuman Law! This seems so obvious as a TV Series, I’m a little surprised Marvel Studios hasn’t given it the “Green Light”. Imagine a less neurotic Alley McBeal whose clients include Superheroes, Supervillains and many other familiar faces from the MCU, also, she occasionally gets to punch someone through a wall. Shulkie has a huge cult following among Marvel fans, so there’s an audience ready-built for what could be the most unique programme in prime-time.

Now, stop me if you’ve heard this one; a spaceship crashes in Kansas carrying a baby boy with incredible strength, he’s found and taken home by a farming couple who decide to raise him as their own, until the Army turns up and takes the boy. Dubbed “Mark Milton” the alien child is raised in an artificially “perfect” American environment until he is old enough to be deployed in the Gulf War. Meanwhile, germs from the spaceship have given a young Alabama boy super speed and mutated an unborn child into a fish-creature, a goddess awakes in Greece, the power crystal of the ship gives a special forces soldier super powers and the heir to a fortune sees his parents gunned down in front of him. Penned by Joseph Michael Stracynski (Babylon 5), Supreme Power is, essentially, Justice League through a glass darkly, and if it could be made as a film, it would cement Marvel Studio’s superiority in the world of Superhero Cinema for decades to come. Just imagine if Marvel produced a “better” Justice League film, Warner Brothers would crap their pants.

It comes… and there is no escape. Gah… Lak… Tus… Of all the many retellings of Galactus’ coming to Earth, none has done it on as grand a scale as Ultimate Galactus. An alien broadcast out of Russia foretelling the end of all life kick-starts a SHIELD investigation, uncovering the terrifying truth of Galactus, the Devourer of Worlds, and it comes to Earth. It seems as if no defence can be mounted against such a creature and his “Heralds”, Silver men who preach suicide in the face of the returning god, until a Kree defector, Genris Halason Mar-Vell agrees to help steal the Kree database on Galactus. The Avengers, SHIELD, the Fantastic Four and the X-Men must work together to devise ways to achieve the impossible; defeat Galactus. The comic is filled with fantastic scenes that would translate brilliantly to the big screen; Professor X using the subconscious of the entirety of humanity to confuse Galactus, X-Men and Avengers fighting back-to-back and the epic conclusion of Reed Richards opening a gate into a pre-universal hydrogen influx, dropping a h-bomb through and blasting Galactus with the force of another universe’s Big Bang! Admittedly, with the way various Hollywood contracts are set up currently, this film would be extremely difficult to achieve. The X-Men would have to be cut out, the version of Galactus in the comic is pretty uninspiring and the Silver Surfers are lacklustre at best. That said, such a film could serve as a bookend to the entire MCU franchise, it would open up Ms Marvel, the Heralds and even Annihilation (see below).

With Big Hero 6 due out soon, Disney and Marvel have made it clear that they can combine studios to produce interesting children’s cinema. Should Big Hero 6 be a success, I can’t think of anything that would make more sense to do than Power Pack. The Power siblings are the ordinary children of a single-parent scientist until an encounter with a seahorse-like alien leaves all four of them with incredible powers. Keeping Earth safe from the all-conquering Snarks and staying in school is tough enough, but the Power Pack always seems to be running into people like Doctor Doom, The Fantastic Four, Iron Man and SHIELD, who treat them like little kids. An animated Power Pack film would be a great way to draw younger audiences into the MCU and the opportunities for cameos from the live action films would draw in the adults as well.

Thought Galactus was a big deal? Annihilus, the Death that Walks has declared war on our entire universe! Hailing from the Negative Zone, Annihilus has an endless army of insect minions, one hundred super-powered aliens, the Seekers (not the band, but creatures each the equal of a Herald in power) and Thanos on his side, plus he turns Galactus into a living weapon. The only people standing between the universe and total destruction are Richard Rider (the last Nova Corpsman), Drax, Starlord, Gamora, Ronan and Super Skrull. Annihilation is a Science Fiction war story turned up to eleven; planets crumble in the wake of the Wave and even the combined might of three Heralds is as nothing. And the best thing about this story? It ends with a draw and a cold war. Few films would give me more joy than seeing Annihilation on the big screen, moments like Ronan breaking the Universal Weapon over Ravenous’ head, Galactus screaming for Annihilus’ blood, Drax wading through wave after wave of drones, it would be spectacular. A reasonably obscure comic that was cancelled after only 14 issues, Captain Britain and MI-13 seems like it was destined to be a big-budget motion picture trilogy. It all begins with a Skrull invasion; desperate to remove magic from the human arsenal, England comes under siege from an army of Magic-Wielding Super Skrulls. Captain Britain (Merlin’s Champion), The Black Knight (wielder of a cursed blade), Spitfire (WWII Superhero turned Vampire), Blade the Daywalker (he’s British, you know), Peter Wisdom (imagine Johnny Depp playing James Bond with magical powers) and Doctor Fazia Hussain (the Muslim wielder of Excalibur) fight off the invasion right on the steps of the Houses of Parliament; and that’s just the first film. Forming MI-13 to deal with super-powered and supernatural threats to Britain, the team go on to battle a daemon bent on global domination posing as a Birmingham Gangster and finally fight off an invasion of England by Dracula and his army of Vampires from the moon. With great supporting characters like a Skrull turncoat posing as John Lennon, Union Jack and Captain Blood, Captain Britain and MI-13 could be the next big trilogy after The Avengers.

Yay explosions! Next Wave are in your room, touching your stuff! Five Z-list superheroes are recruited by the Highest Anti-Terrorism Effort (HATE) to battle the enemies of Freedom, only to discover that HATE is actually a Terror Cell named SILENT and are planning to field-test bizarre weapons of mass destruction on America! Monica Rambeau (Photon), Aaron Stack (Machine Man), Tabitha Smith (Boom Boom), The Captain (his name is The Captain!) and Elsa Bloodstone (she’s English) must battle against killer koalas, Elvis MODOKs, broccoli men and Dirk Anger (Supreme Director of HATE) to prevent thousands of deaths. Along the way, we’ll discover that The Captain has issues with teddy bears, Tabby is an illiterate kleptomaniac, Aaron Stack hates “fleshy ones” and Dirk Anger is suicidal. Next Wave is manic, unpredictable, utterly silly and probably would make Marvel Studios squillions of dollars. Next Wave: Blatantly wasting your money since 2005!

To celebrate Talk Like a Pirate Day, my local club (see the NWA Home Page in Links) put on a variety of Pirate-themed games, my own effort involved Superheroes (of course).

In an attempt to track Black Manta (see SSUA Issue #3), The Phantom enlisted the help of his daughter, Jedda; together they discovered that Manta had sided with the Singh Brotherhood and was hiding on one of their many secret island bases. Worse still, the Singh Brotherhood has taken hostages, so the Walker family will have to be careful.

The secret Singh Brotherhood base.

Manta and the Pirates patrol the island, keeping a sharp eye out for any purple-clad do-gooders.

Manta himself is the one to discover The Phantom hiding inside a barrel. Hero and villain trade blows, leaving both staggered, The Ghost Who Walks is forced to retreat.

Devil brings down the Aquatic Villain in record time, getting revenge for Flash Gordon's defeat!

The Pirates discover the craft the Heroes arrived in.

Jedda and Kisa leap from hiding to join the fight.

Hearing the sounds of gunfire, the Pirates rush to help their comrades.

Their weight of fire is enough to bring down the Ghost Who Walks...

...sending Devil into a frenzy!

Jedda takes cover with one of the hostages.

Kisa sets about thinning the number of pirates.

Weight of fire brings down Devil before he can rejoin his master's daughter.

Kisa tears through pirate after pirate...

...until her luck runs out and they get the better of her.

Two pirates corner Jedda, but she holds her ground and sends them both to the locker!

Jedda frees the first hostage (an important objective, remembered only when the bullets stopped flying).

An injured Jedda prepares to make her last stand.

Luck is with the Walker clan, and the last pirate is defeated!

This was a really fun, and tense game, it looked like it could go either way several times. Thanks to Brendan for the terrain and Phil and Michael for playing.
Posted by Hat Guy at 8:46 PM 1 comment:

Ready for tonight's game (come back next week to see the report), Jedda Walker and Kisa from Defenders of the Earth. She's a fan-favorite of anyone my age and a bit older, also the daughter of Kit Walker, The Phantom. 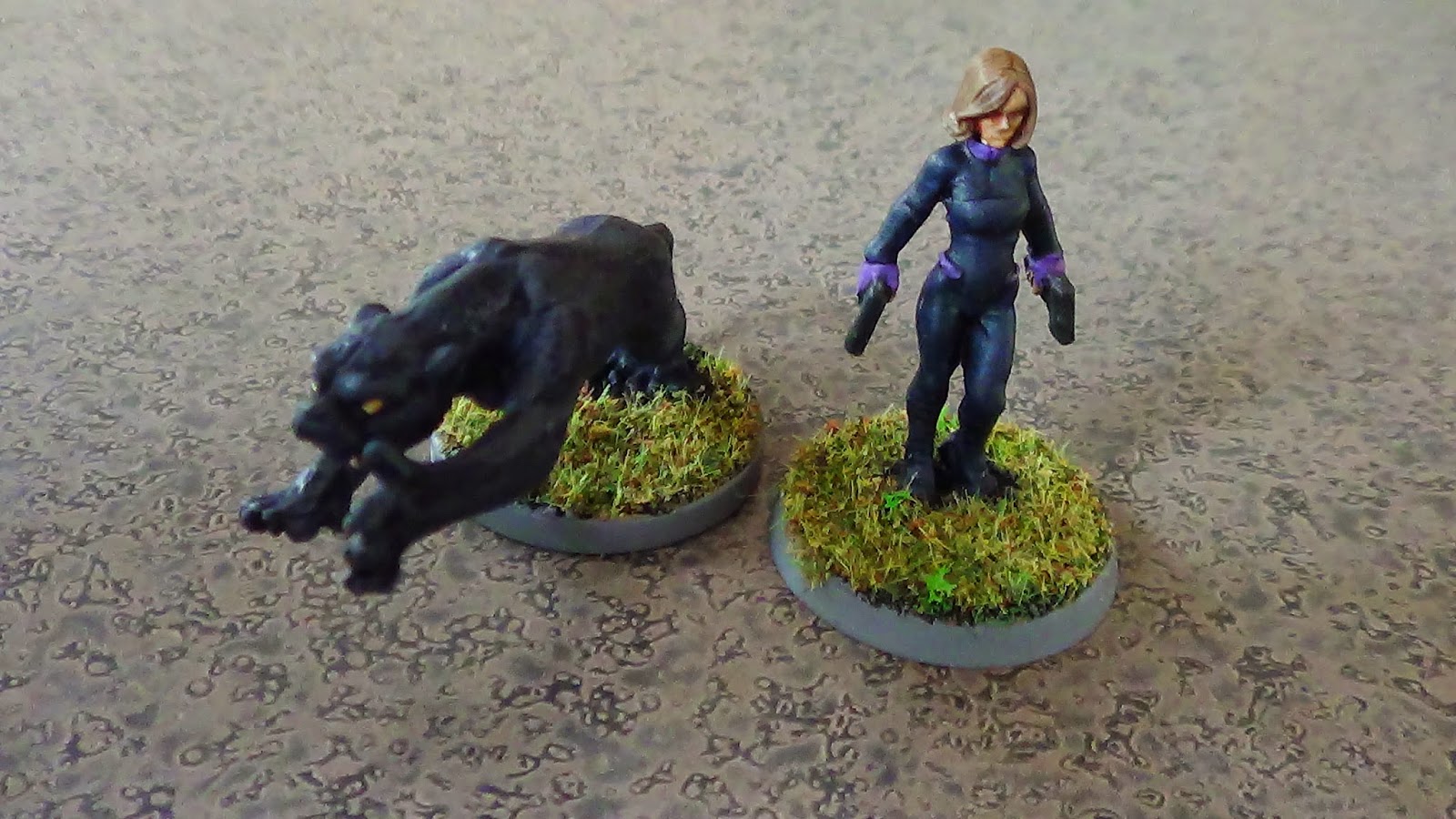 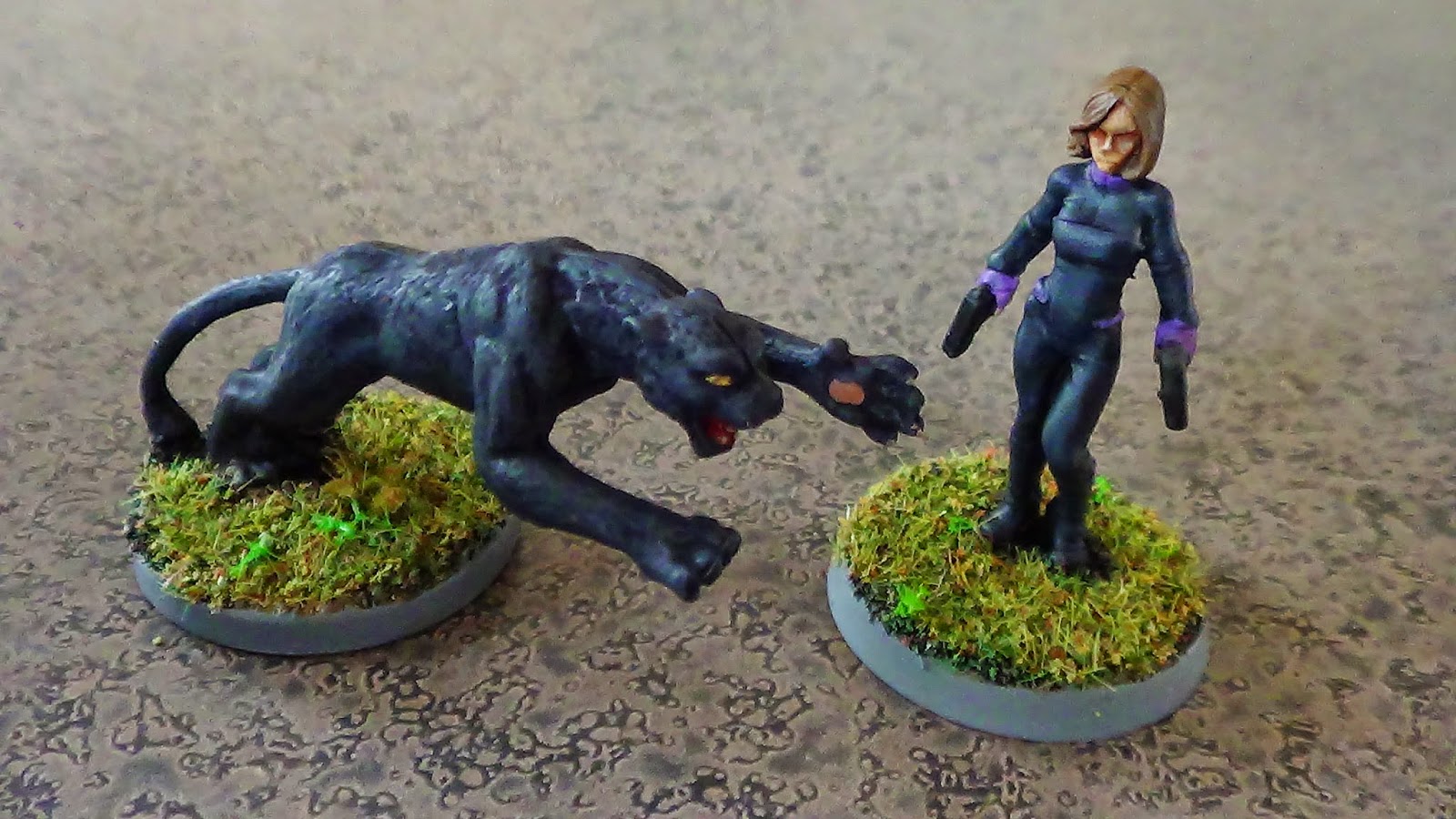 Jedda is Hasslefree and Kisa (the panther) is a D&D Mini. This is my first Hasslefree mini, it was a pleasure to paint.

Also, my Gamera kit arrived in the post today, here's a look at his legs: 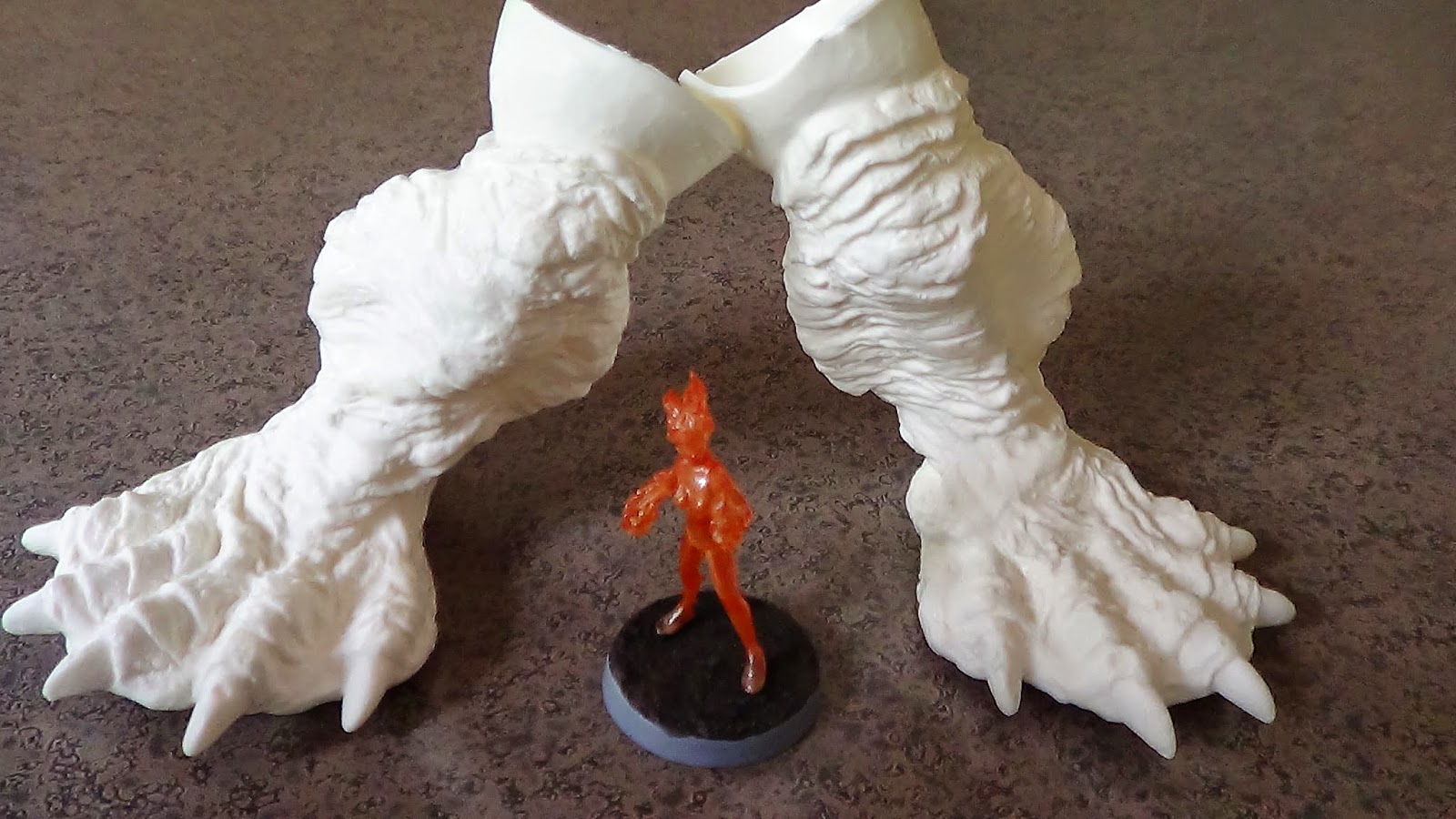 The kit is, of all things, PVC (like plumbing pipes), the instructions say superglue will hold it, though I do have some clear plumbing cement if that doesn't work.
Posted by Hat Guy at 9:30 PM 1 comment: