Longtime readers will be aware of my love for Superman II, despite it's age and many flaws. Natually, when the chance to grab the Donner cut on Blu-ray for $5 turned up, I grabbed it and settled in for a night of feeding the starving Film graduate in me. It was... interesting. For those not in the know, Richard Donner originally intended that Superman and Superman II would be a single film, about four hours with an intermission; odd, but not unheard of for the era, just consider 2001: A Space Odyssey. That Donner would be given the opportunity to rework Superman II to be closer to his "vision" is interesting in an academic sense, but still jars with his original, overall intention. Lucas aside, I'm usually a fan of visionary directors getting a chance to rework their masterpieces, but the complexities of Superman II mean that it's problematic at best. That said, the Donner cut is well worth watching, it's still a good film and there is plenty to enjoy, I'm just not certain that it would be fair to say that it is, in any way, the "superior" version. 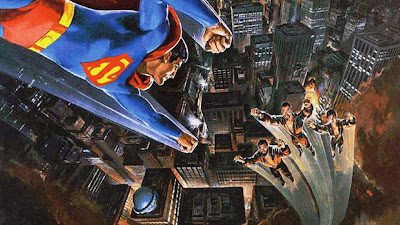 So what does the Donner cut do better? Well, the plot is a bit better, it flows better and doesn't seem quite as far-fetched. The reveal, when Lois Lane uncovers Clark Kent as Superman, is better, with Lois outsmarting Kal, rather than just throwing herself off cliffs until he's obliged to save her. Some of the new/extended scenes don't look great, even in HD, because they were unfinished in the 1970s and no amount of digital polish can improve what wasn't there to begin with. Sadly, although the ending is changed, it's not for the better, and I still feel that the best version was left on the cutting room floor, where a de-powered Zod, Ursa and Non (along with Lex) are carted away by some kind of Arctic police force and sent to prison. Here we get a re-hash of the problematic ending of Superman, not leaving open the idea of Lois being pregnant, which was one of the better ideas in Superman Returns. 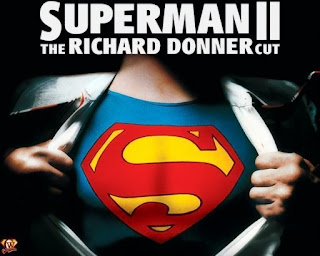 For those, like myself, with an academic bent, the Donner cut is well worth checking out, but for those with a nostalgic take on the original, it is perhaps best left alone. I'm honestly not sure which one I'll be watching more moving forward, both have their good and bad points and are sitting about even in my estimation at the moment. Still, pretty much any version of Superman II is going to be superior to the next wave of Superman and Justice League films that are set to be released over the next few years. Actually, while my mind's on it, I must check out the documentaries on the disc, there's probably something pretty good...

Apologies, as you've seen half of these before, but now the group is finished: 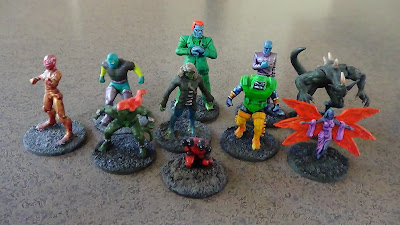 The Centurions are Annihilus' army of 100 super-powered beings, forced into his service by the shrinking and dying Negative Zone. These minis are all various spare Clix I had in my collection, given interesting paint jobs. 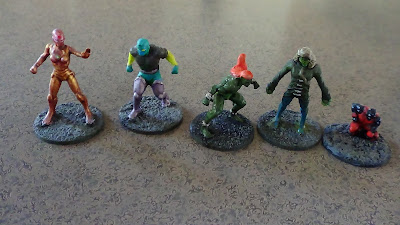 Much as is my style, these colourful aliens can pull triple duty, as they will form a generic "Space" team for SuperSystem, allowing me to try out power combinations that don't fit my other teams. 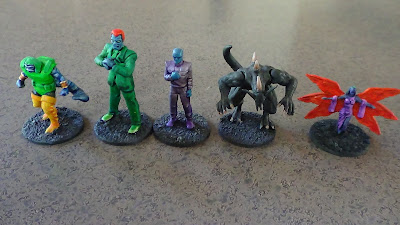 As for their final role, they can work as Alien civilians in a wide range of games. Not bad for something I had laying around.
Posted by Hat Guy at 5:09 PM 1 comment:

No, this film has nothing to do with The Lego Movie, it is actually a tie-in for the Lego Batman series of video games, specifically Lego Batman 2. Lex Luthor gets the brilliant idea to team up with the Joker and the pair enact a plan to use modified Smilex to brainwash people into electing Luthor as President. Naturally, the Joker betrays Luthor and the Justice League has to take down a giant clown robot before it can destroy the city. As a piece of cinematic drama, Lego Batman - DC Superheroes Unite doesn't deliver, but as an extended trailer for a fun video game franchise, it's pretty good. Yes, it's just a bit of fun for the kids, but it's well done and entertaining enough that I've sat through it twice now; once because it was on before I started doing these "Superhero Media" blog entries. 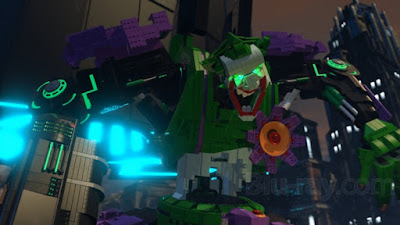 I'm struggling a bit with this one because the film was pretty much bang on average, not too many good bits and not too many bad bits. Robin's constant insistence that Batman call the JLA is rebuked in a very Batman fashion for very Batman reasons, Superman is so goody-goody that he borders on annoying and Cyborg is forgettable. One day I'm going to do an entry on why Cyborg's promotion to Leaguer was awkward tokenism, but for now enjoy him failing to be at all interesting. There's also a great callback where Robin thinks Batman's kryptonite hording habit is a tad paranoid, but Wonder Woman thinks it's a great idea. Also, no one seems to like Green Lantern very much, which I'm not sure isn't a reference to the terrible live action film or just a continuation of the joke from The Lego Movie. 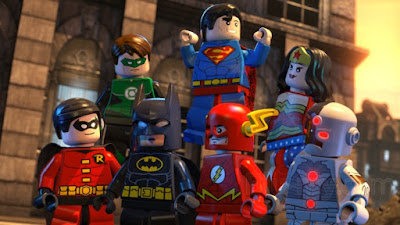 If you need something to get the kids into superheroes, or just want something on in the background while you paint, give this a go. It's not great, but there are a few laughs to be had and it's certainly better than most live action DC releases of the past few years. There are a couple of sequels and I may get to them at some point, but the media backlog still looms pretty big, maybe if they show up on Netflix.
Posted by Hat Guy at 4:50 PM No comments:

Miniatures Finished: The Incredible, the Miraculous and Undead Squared

As painting is something of a stress relief for me, it's no wonder that essay season is a good time to get miniatures finished. 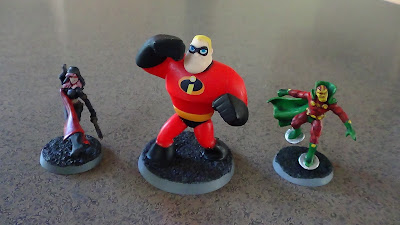 Brit (aka "Big Boobs Brit") from IDW, a converted Indy Clix, the smallest toy of Mr Incredible I've found to date and Mister Miracle. Brit will be important for a campaign down the track and my quest for a Heroic 28mm set of Incredibles continues. 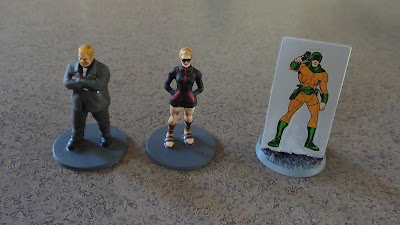 Two more fast and easy dipped Clix civilians and Mirror Master. Part of me is tempted to get a few more of these Clix and one of the new ones, leaning out of the mirror, to really capture the character, but that's an idea for down the track.
Posted by Hat Guy at 4:43 PM No comments: