This film has a horrendous reputation, it is famed for being one of the "death-blows" of superhero cinema. Now, before  go on to defend it for a little, I'll describe exactly why it's so god damned bad. Superman remains a shining gem of superhero cinema, but it was expensive and difficult to make, so much so that Richard Donner, the director, was fired partway through the sequel. Consequently, Superman II, as much as I love it, got a bit more camp and silly than the original, with more studio oversight and heavy editing. Continue this trend for two more films and you can understand how campy and dumb Superman IV got. It may be down to the idea, that never seems to go away completely, that superheroes are for children and, thus, jocular and simplistic are core watchwords of plot. Whilst I'm not inclined to compare comics too closely to other forms of art, Superman, at least, was a hit will all ages. Still the series devolved, and we're left with Superman IV as the final reminder of what started out as a great series. 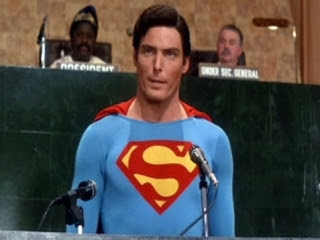 So, is there anything redeemable about Superman IV? Well, some of the ideas could work as the basis of much better story-lines. Superman (or, more likely, Hyperion or Invincible) decides to disarm the world by force? How would the USA react? Or Israel? Or North Korea? Each hero is the body of the "American Way", so could this be construed as Western Imperialism or a straight-up act of war? With nuclear weapons gone, would the 'hero' start on tanks, planes and/or guns? Could the planet Earth soon be under a totalitarian regime where knives and pointy sticks are whisked away by an omniscient ubermench? How could ordinary people fight back, and how would other heroes react? Iron Man would be pretty pissed when someone tried to take the suit out of his bones and Black Panther never reacts well to a border violation. Hell, there's a good RPG or narrative scenario right there, Black Panther has to take down the Man of Steel gone rogue. 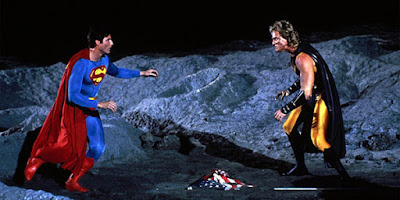 Don't get me wrong, unless you're a few drinks in, don't bother with Superman IV. It's a dull mess that makes no sense and is best forgotten. The fights fail to be interesting and there are too many sub-plots that go nowhere. To be fair, there was no chance of this being good after Superman III, but it didn't need to be this bad either. Only bother with it if, like me, you're a completionist. Still, it was far more entertaining than Super Buddies.
Posted by Hat Guy at 5:20 PM No comments:

Good progress continues, which is great because I've bought a tonne of clix this year! 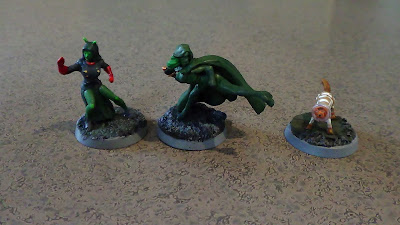 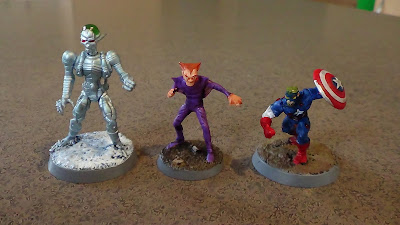 Brainiac, Space Phantom and Colonel America. Each are touch-up jobs on factory paints. Brainiac got a snow base as a tribute to Whatever happened to the Man of Tomorrow?, Space Phantom is just a favorite early Avengers enemy and Colonel America will see some play in Zombies and Firefight games as well as being a good Avatar for Thanos.
Posted by Hat Guy at 5:02 PM No comments:

God I watch some crap for these things. Seriously, I must have a problem, because every time I see a vaguely superhero-ish film on TV or Netflix, I have to watch it and add it to the Superhero Media backlog that never seems to go away completely. In this crapfest, some puppies get super-powers from magic collars that come in bags of dog food and decide to fight crime because what else would you do? The dogs have "personalities", in that they have a single defining aspect, such as food, sports, racism and being a girl. This review is going to be more a collection of bitter ranting about the quality of entertainment for children than an in-depth examination of superhero tropes as they are explored in different media. 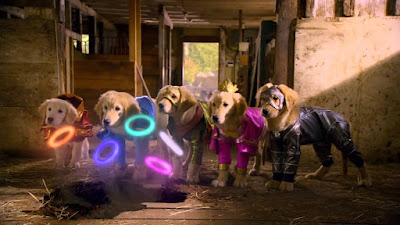 I was lucky growing up, the Disney Renascence was happening, classics like Watership Down and the Narnia books were readily avialble. Yes, crap like Street Sharks was on television, but there was quality available and it did better in the market. Most people of my vintage have only hazy memories of Street Sharks, but Batman The Animated Series and Animaniacs are firmly etched in our minds. I really hope that this dog turd of a film is soon forgotten and no children attach fond memories to the one girl dog getting princess powers and the puppy clearly voiced by a very white man saying "yo dogs" every thirty seconds. The evil alien is defeated with the powers of love and friendship and the whole sorry mess lasts just over an hour. 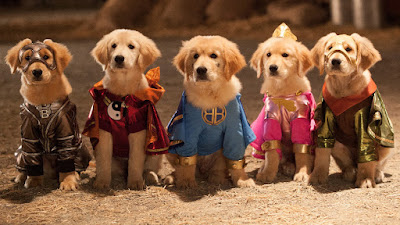 Is there a lesson to be learned from this garbage? Yes, go read We 3 instead and see how this concept can be done better. Hell, check out Cosmo the Space dog in Marvel comics or some of the newer work done with Krypto. Pet Avengers is pretty good for a joke comic and Thor, Frog of Thunder is always good for a laugh. The difference with those examples is, of course, that someone gave a crap and put a modicum of effort in. But hey, Super Buddies is only for your kids right? Who cares?
Posted by Hat Guy at 7:27 PM No comments:

Fresh off the painting desk: 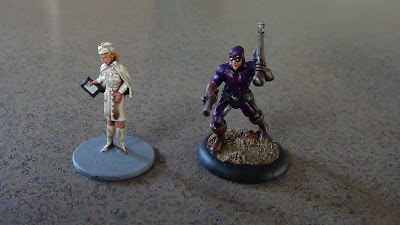 Quickie civilian nurse (Dipped and rebased clix) and Swashbuckling Phantom for a big Pirate game later in the year. 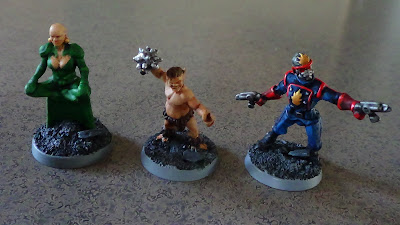 Moondragon, Pip the Troll and Starlord join the fight for some Frostgrave later in the year.
Posted by Hat Guy at 4:36 PM No comments:

Email ThisBlogThis!Share to TwitterShare to FacebookShare to Pinterest
Labels: Defenders of the Earth, Frostgrave, Marvel, Painting and Modelling, Pirates

The Hellblazer comics are something of a masterwork in urban horror and mysticism. Penned over the years by some of the best comic writers to come out of the UK, Hellblazer is a unique beast that sits best in the Vertigo line, just outside the world populated by Green Lanterns, the Suicide Squad and Lex Luthor. The protagonist, John Constantine, also works best operating out of England, as the "fish out of water" element of a Brit in the USA tends to be distracting, putting a larger focus on the hilarity of British slang and idiosyncrasies that seem "odd" to Americans. So once again, the chosen adaptation places John in the USA to fight monsters and do some magic. The problems with this approach are not merely cultural, John really should be swearing and chain-smoking, which are big problems on American television and there is also a sense of a divine plan and a loving god, something else typically missing from the pages of Hellblazer. So it seems, once again, we're looking at an American take on a British classic. 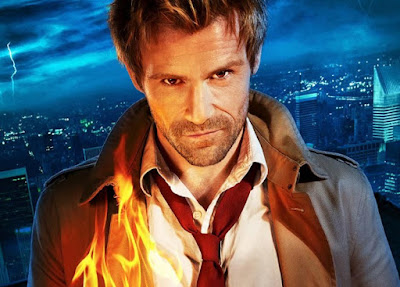 In it's favour, Constantine is well cast. Matt Ryan seems pretty much born for the role, carrying the programme in many places where the writing and effects let it down. It sounds a tad backhanded, but Ryan seems to be doing the best he can with the material he's given; I'm keen to see what his appearance in Arrow is like and how that gels with the brooding, shirtless, buff guy patrol. I'm in two minds about the inclusion of broader DCU elements, such as Felix Faust and Doctor Fate's helmet. On one hand, I like the idea of heroes being part of a whole world, rather than an isolated, "chosen" few. On the other hand, John always seems a bit out of step with the rest of the DCU. I can not really, for example, picture him in the Champions of Tomorrow or a Justice League variant. It's like having the X-men fight Dracula, sure they're in the same universe, but the tone is so off, it fails to "feel" right. 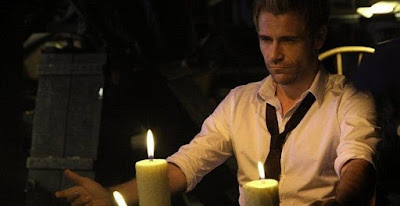 I should probably talk about the programme at some point, right? It's ok. About on par with the first season of Supernatural. I can't say I'm disappointed that it wasn't renewed, but I would have watched more of it. The third episode "The Devil's Vinyl", is worth checking out, featuring an infernal Robert Johnson recording and Constantine blasting Sex Pistols and shouting "Gimme some juice, Johnny!" as a battle-cry. Makes the music nerd in me very happy. One of those oddities where less familiarity with the comics will make for more enjoyment.