Still on a Supers painting kick, enjoying it while it lasts. 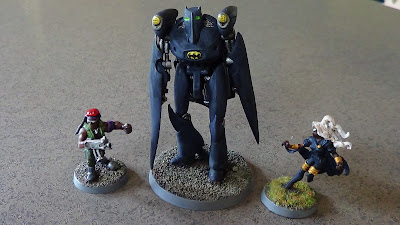 Major Lazer (kitbash), Bat-Bot and a new Storm (both clix). 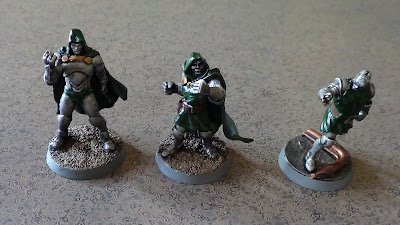 Doombots, one can never have enough (all clix).
Posted by Hat Guy at 3:46 PM 1 comment:

To give the full name of this one; Batman Arkham Asylum a Serious House on Serious Earth, what a damn mouthful. Ever read a book that everyone is so deeply convinced is a bona fide classic that to voice a dissenting opinion is to invite a tirade of abuse and then really not understand what all the fuss is about? That's Arkham Asylum for me, a stone classic that I really cannot get into. On April 1, the inmates of Arkham riot and take hostages, demanding that Batman be sent into the Asylum or else. Batman goes in and a bizarre journey into the psychology of of both him and the inmates begins, ending with... Batman walking out mostly unharmed? The intention here is to have the graphic novel be read multiple times, looking for missed connections and subtleties that won't be apparent on the first viewing. That probably works for most fans, as most fans aren't packing an English Literature degree and a lifetime of overthinking mythology, superheroes and narrative structure; but here I am. 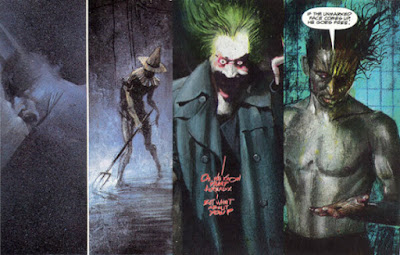 Here's the thing, the story is clearly Batman having a nightmare. None of this is actually happening and that is set out so plainly on the first page of the novel that I wonder why it's considered a big deal. The novel opens and closes with quotes from Alice's Adventures in Wonderland (because that's not overdone), a novel about an extended dream narrative (and raping children, but let's not get into that here) and the narrative and art have a nonsense, dream-like quality to them. The reader is immediately made aware that events happen on April 1, Joker even has the line "April Fool!" early on. Arkham Asylum is perhaps most memorable for the artwork, which is all painted by Dave McKean and looks great, but makes the dialogue hard to follow, especially as traditional comic word balloons aren't always used. 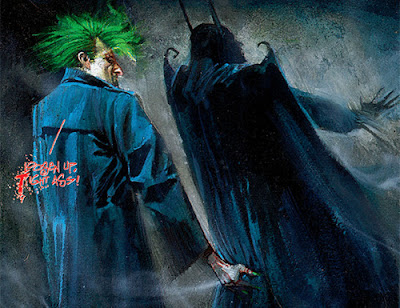 I don't get the appeal, sorry. The art is great, but not McKean's best work. The twist of the dream is too obvious to be clever. I like Maxie Zeus as a Batman villain, but why does he have lightning powers all of a sudden? Why are the psychiatrists so corrupt and unethical? Hell, why does Arkham need to be displayed as a corrupt and decaying institution, are all the homicidal maniacs not threatening enough? When did Mad Hatter become a pedophile? Is that just a reference to the horrible things Lewis Caroll did? Why does Batman have nightmares about being fondled by the Joker? God, this is actually really not very good at all now that I think about it. If you absolutely have to read all the classic Batman graphic novels, then give it a go, otherwise just Google Dave McKean and check out an amazingly talented artist.
Posted by Hat Guy at 3:29 PM No comments:

Five more characters I'd like to see in the next Smash Bros game...

I'm writing this one in the same week as the new Smash Bros teaser has dropped, the one with the Splatoon kids; you better believe I'm hyped. I also just found a full-time counselling job, so I'm keeping an eye out for a Smash Switch bundle so that I can get smashing! I actually had a series of these articles planned, but as most will probably be out after the game, maybe we'll have to start considering them as "Smash Characters I'd like as DLC" or something similar? Either way, there's plenty of great characters that would be fun in the Nintendo and friends free-for-all and I'd still like to talk about them.
As a side note, yes, I would like to see the Ice Climbers, Pichu, Star Wolf and Solid Snake back in the game, I don't think the franchise should be losing characters, only gaining them.
Would you believe I wrote that last sentence months ago? Boy was I vindicated by the E3 reveal yesterday!  Anyway, on with the wish-list!

The Prince (of Persia) 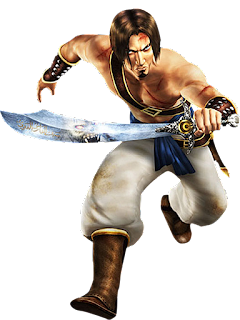 Did you know that this character doesn't actually have a canonical name beyond "the Prince"? I could have sworn that he was "Dastan", but maybe that was just the terrible film? For me, Smash Bros is about legacy, and few characters have a legacy like the Prince; having been around since the Golden Age of gaming, enjoyed probably one of the greatest games on the PS2 and still kicking today. In terms of Smash, the Prince is agile, fast and has a fun recovery mechanic in the dagger of time, able to reverse him a few seconds before it has to recharge. 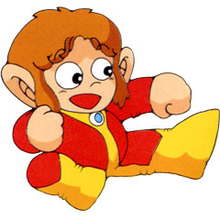 Speaking of legacy, how about some classic Sega up in here? For the youngsters in the audience, Alex Kidd was the star of a few platformers and was, before Sonic, the mascot for the brand. Alex Kidd would essentially be the Sega answer to Mr Game & Watch for Smash, a character that is there to charm a few people more so than being a major draw card. In terms of play style, Alex Kidd would almost be a Mario clone without the fireballs, again, probably no one's favourite character, but one who deserves inclusion. 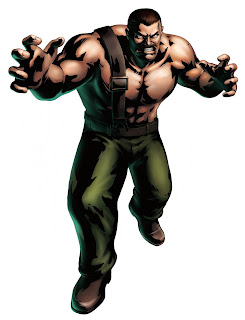 I was thrilled to see Haggar turn up in the Marvel Vs Capcom series, having grown up with Final Fight in the local Fish and Chip shop, who doesn't love a professional wrestler-turned-mayor as a protagonist? Haggar is big, tough and focuses on grappling, which is something that doesn't currently exist in Smash Bros, as well as being a popular character in his own right. I'd play the heck out of Haggar if he was reasonably well balanced against other fighters, at least for the fun of suplex-ing Yoshi. 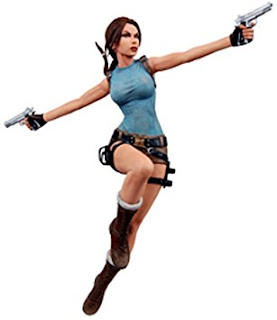 Huh, why has Lara not popped up in Smash before? She has the history, brand recognition and variety of moves to fit in, is she just not that popular in Japan? Hell, I'm not sure there's really much I need to say about this choice, it just seems so obvious to me. She shoots, she jumps and she's one of the leading ladies of gaming, she can wear the old blue top or the new dirty rags, but she definitely needs to jump-kick Luigi in the face. 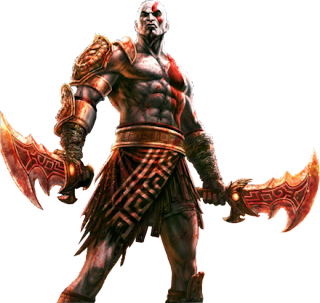 I've never played the God of War games, but I can regonise a popular character when I see one, hence Kratos. He was fun enough in Playstation All Stars Battle Royale, and would perhaps tempt a few of the "hardcore" gamer crowd to pick up a copy of Smash Bros. Kratos is a brawler with a huge variety of weapons, I imagine he'd play a lot like Link, but less controllable and more brutal. Again, probably not someone I'd play a lot, but I love the juxtaposition of the more "realistic" Smash characters with the cartoon ones, like Samus and Pikachu teaming up during "The Shadow Emissary". God, I hope the new Smash has an Adventure Mode like that again, it makes Brawl worth owning alone.
That's it for now, hopefully more before the game actually drops.

Best Batman ever. Sorry Adam West, you shall be greatly missed, but you're a very close second to Kevin Conroy. Naturally I don't need to talk about how good this series is, it should speak for itself, but there are couple of things I wanted to discuss that won't quite fill up several "Thinking Out Loud" articles, so they may as well go here. Firstly, how can Warner Bros. not find a good outline for a Batman film when almost any of the Batman the Animated Series [BTAS] episodes would be a good starting point? Sure, there are a few duds like "Baby-Doll", though the pay-off for that one in a later season kind of makes it worth it. Most of the two-parters, like "Feat of Clay" and "Shadow of the Bat" would make a damn good 90 minute film with a little world-building added. Bruce Timm and Paul Dini are still around, why haven't they been approached to take a swing at the flailing Batman film franchise? 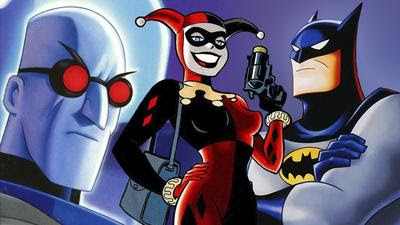 Second, why are people so down of the 4th season of BTAS? Is it just because the animation style changes? Or even just because the design of the Joker takes a weird turn? Season 4 has some of the best episodes, hands down! Ok, the change in animation is jarring, but it was done to keep a unified style with Superman the Animated Series and Justice League, both of which are awesome in their own rights. Season 4 episodes like "Legends of the Dark Knight", "Mad Love" and "Judgment Day" are astonishingly good, stop shunting the later stuff off just because you don't like the Joker having black eyes. For me, a slightly odd-looking Joker is a decent trade-off for Nightwing, Batgirl and Robin. 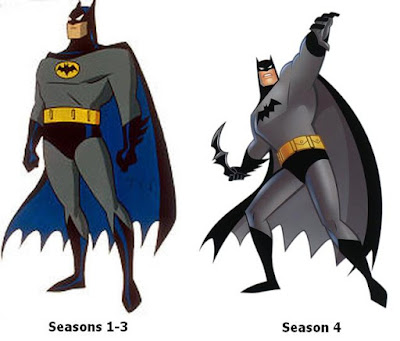 Finally, if we're to buy the idea, that in the DECU Films, Batman uses some kind of voice-modulator to disguise the fact he's Bruce Wayne (which is actually a pretty good idea), why not get Kevin Conroy to dub the dialogue? Fanboy moment? Sure. But you cannot deny that the Bale-grunting and Affleck-bot are tiresome, nor can you deny that Conroy has a hell of a voice for the character. It would differentiate Batman and Bruce Wayne, something the better Batman films do well, give a fun nod for the fans and keep the seed of the good idea that the modulation was to begin with. On a similar note, now that Mark Hamill is back to major film roles, if DC and WB insist on doing "Old Batman", why not get Hamill in as "Old Joker"? Just a thought. Haven't seen BTAS? It's as good as you've heard. The DVDs are finally available in Australia for a reasonable price, so I assume they're elsewhere too; check it out, a great addition to the collection.
Posted by Hat Guy at 4:42 PM 1 comment: