Diesel-punk, Japanese V for Vendetta! Need I say more? Well, yes, I do need to. The film is also called K-20: The Fiend with Twenty Faces or K-20: Legend of the Black Mask in some markets, just in case you decide to go looking for it, which you should do, because it's awesome. In an alternate 1949 where Japan never entered WWII, the Empire is technologically and economically powerful, but socially backward with massive poverty and repression of the masses. Children train for a career before puberty and can never alter their vocation. The public worship two public figures, Inspector Akechi, the greatest detective in the country, and K-20, a masked thief, master of disguise and kind of a "Robin Hood" figure, insofar as he works outside of a rigid system more so than benefiting the oppressed in any way. Heikichi Endo is a talented escape artist and tumbler who is tricked by K-20 and soon finds himself on the run, trying to prove his innocence and keep K-20 away from the beautiful Yoko, an heiress and Akechi's fiance. 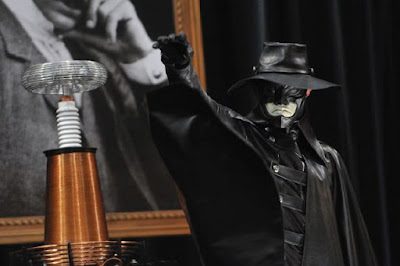 K-20 steals an experimental Teslacoil and is chasing a Pieter Bruegel reproduction because it will lead him to a way to use Tesla's technology to destroy the industrialised world. I'm going to leave the plot there in case you want to check it out, which you really should. K-20 himself is framed as a full-on, V for Vendetta graphic novel anarchist, wanting to destroy the established order and create a populist utopia in its place. Much like Moore's England, the alternate Japan presented in K-20 does not want an anarchist uprising, just a more equitable society and the elimination of of poverty, so Heikichi, Akechi and Yoko have to team up and race K-20 to find the secret Tesla device and save the world. Throughout the film, Heikichi trains himself in parkour, martial arts, disguise and security, picking up gadgets from a former circus friend and developing something of a costume. By the close of the film, Heikichi is a full-fledged costumed adventurer, ready for everything the traditional Japanese hegemony can throw at him. 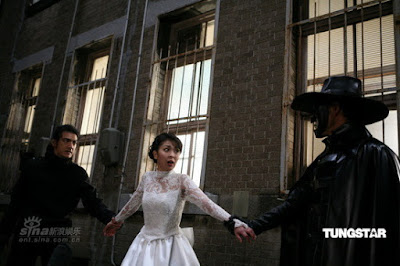 I've got an article brewing about how Japanese writers use typically Western (especially American) genres to explore anti-Japanese ideas, with superheroes repeatedly coming up in this literary resistance. K-20 (the film) rallies strongly against the kind of WWII-era Japanese values of society above self or happiness that films like Space Battleship Yamato or Godzilla: Final Wars (both genre cinema in their own rights) glorify as the pinnacle of citizenship. The key to Heikichi's eventual victory over K-20 isn't sacrifice, but making decisions that benefit himself at the cost of society. We're pretty used to that concept here in the West, especially when it applies to a white, cis-male, heterosexual protagonist, but in Japan, it's still something of a revolutionary concept. K-20 is a hell of a good watch; fun, fast-paced and funny when it needs to be. Check it out if you can while I look for a suitable miniature to get him on the table.

I've been playing some more Smash Bros Wii-U and 3DS lately, mostly because they fit well with my busy work roster; they're still a lot of fun and I love the mix of characters, even the ones I didn't know before. Of course, playing the game more has made me think a bit more about it, and one question keeps raising itself, why aren't there more of these games? Not why hasn't there been more than the existing Smash Bros games, but why has the formula, a fighting game with a basic control scheme and a cast of preexisting characters, not been duplicated elsewhere? Yes, there was Playstation All-Stars Battle Royale, which wasn't bad actually, but it suffered from not having a great selection of "Classic" characters. Actually, I think Playstation All-Stars Battle Royale was a bit ahead of it's time, if it came out now, characters like Nathan Drake and Cole Cash would probably have a bit more of a following. 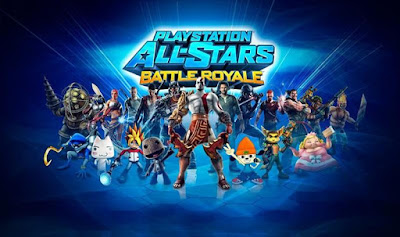 Back to my main point, though, why isn't there a proliferation of fighting games with a basic control scheme, no set combos or supers and an emphasis on fun? It seems like a pretty straightforward way to generate a decent profit from any IP that a developer happens to be sitting on. Hell, not even a full franchise would be really necessary, can you imagine such a game with just the Robot Masters from the Megaman series? I'd play that. Not to mention sprawling franchises like Marvel and DC superheroes, Dragonball and Sonic the Hedgehog, all of which would have ready fanbases who don't necessarily play a lot of video games that may still be interested in something "Smash-like". I don't really want to accuse the Competitive and Fighting Game communities of gate-keeping, but there was a huge move against the Professional Smash Bros scene when it started to explode and the games developers do tend to not accommodate the casual market. 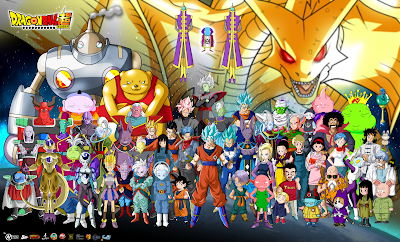 Look, I'm not here to attack "Gamer" culture or the industry that it feeds and feeds it, despite the endemic problems that have continued since I started trying to get into the community; but what about the economic argument? Smash Bros is the biggest selling Nintendo franchise without "Mario", "Pokemon" or "Zelda" in the title. Sure, other developers can't use the classic Nintendo characters, but Rare are sitting on a lot of IP, Square has 30 Years worth of Final Fantasy characters alone and id Software has had a huge fan following for decades. Actually, now I really want to play a game where I use Commander Keen to beat down Robo-Hitler from Wolfenstien 3D, can someone please make that happen? I don't know, this just seems like an easy win to me, surely there's room for more "casual" fighting games in a world where Injustice and Marvel Vs Capcom already exists?

Note: Between writing and publishing this, I spoke to a Games Journalist friend and he mentioned that, mechanically, Smash is very difficult and expensive to program and that several similar games based on anime properties are starting to crop up in Japan. Hopefully this sort of game moves out West sooner or later.

Who watches Watchmen? People who find the graphic novel too cerebral and angst-ridden teenage boys looking for validation for their impotent rage. This adaptation completely misses the point of the classic Watchmen comics and puts in more nudity and violence to give it mass-market appeal. Sure, Watchmen looks good, Zach Snyder is nothing if not a talented cinematographer, some of the scenes are simply gorgeous and look ripped from the panels of Dave Gibbons' art. Rorschach and The Comedian are well realised, but most of the rest of the characters are major missteps in some way. The narrative does not hold up to scrutiny, the changes to the story only make it less coherent and less impacting. The question I'm always left with when thinking about Watchmen is "why?". Why were certain choices made? Why was x changed but y left in the adaptation? Let's throw some out there. Why are Laurie and Dan not hiding their identities in their last scene? They've committed several federal crimes, who pardoned them? And why is Dan coming up the stairs when he enters, is Archie somehow in Sally Jupiter's basement? In her retirement condo in Florida? How did a massive airship fit in there unnoticed, let alone fly there from Antarctica without being noticed? This is just one scene! A major one in the comic that introduces the concepts of the Dark/Iron Age of comics to signify the element of "never-ending stories" that defines the medium, in the film it just gives the audience a "happy ever after moment". Which is then immediately undercut by Rorschach's journal arriving at the New Frontiersman office, a place not laid into the film previously (unless you're watching the bloated "Ultimate Cut").

Again, all of that nonsense is one two-minute scene of the three-hour film! All of the changes don't simply undermine the narrative weight and meaning of the comic, they work against narrative strength of the film. Let's talk about the squid. Many praised the change in the film that has Ozymandias frame Doctor Manhattan as the enemy of the world rather than a race of psychic alien brain squids, but they forget that the impending doom and arrival of the squid is laid into the comic as early as the first issue. In the comic, Ozymandias kills the Comedian because the latter uncovers his plan to save the world; the Comedian is later revealed to have done this by infiltrating an uncharted island on governmental orders, suspecting a communist plot. When the Comedian arrives on the island, he finds a community of artists, writers and scientists creating an entire alien race, planet and culture. How did this happen in the film? How did the Comedian uncover Ozymandias' plot? It's never explained, he just did because the plot says so. Therein lays the major problem of Watchmen; it is not simply a bad adaptation, it is, whole cloth, a bad film. Poorly paced, oddly edited and leaning heavily on a visual style that is not as unique or interesting as it purports to be.

Zach Snyder is, as I've said before, a brilliant visual director and cinematographer. He's ideally suited to direct adaptations of visually-driven source material, which is why the film version of 300 works so well; both Snyder and Miller are image-focused and often work with the hyermasculine. Snyder is not suited for something like Watchmen, a narrative and metatext-dense deconstruction of traditional superhero tropes set against a backdrop of Cold War paranoia, the commodification of the punk ethos and a burgeoning queer sexual revolution. Did you honestly get any of those themes from the film? I rarely say this about any film, as I believe that something redeemable can be found in almost every production, but I hate Watchmen. Honestly hate it. It may not be as "bad" as Catwoman, Super Buddies or Zoom, but none of those left me literally yelling at the screen in frustration as the entire point of the narrative was steamrolled over to get more action and blue penis on screen. I never want to watch a second of this again. 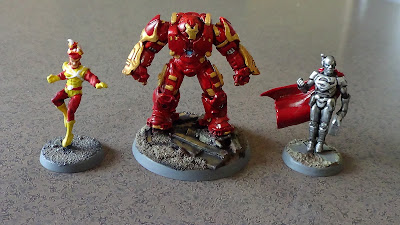 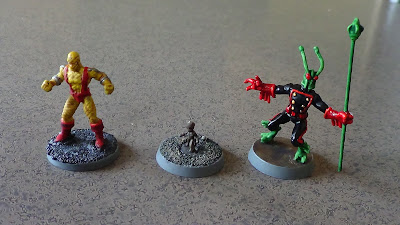