Even more Smash characters... getting silly

Man, I thought my wants for "Smash Switch" were self-serving and backwards, that was before I watched a bunch of YouTube videos of "hardcore" video game fans and their wish-lists. Say what you like about mine, but at least I'm not demanding that Smash become a Fire Emblem fighting game spin-off or feature every single protagonist from the Golden Age or think that fucking Goku is going to work. No, stop it, I don't care that there are Goku mods for the existing games, it's never going to happen, so use the space you've been saving on your shelf for that Goku Amiibo for something useful.

Rant aside, I, too have a wish list of utterly improbably characters that I'd like to see in Smash, so here's another list of characters that I want to beat up the Fire Emblem crowd with. Yes, they're silly and unrealistic, but that's half the fun. 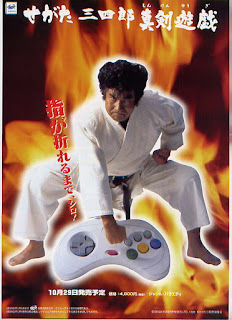 A brilliant marketing icon for the Sega Saturn, Segata Sanshiro has gone on to have a life of his own, appearing in comics, video games and even songs. A master of martial arts and every Sega Saturn game, Segata possesses superhuman strength and agility, being able to deflect a cruise missile with his body alone. Oh, and he carries a giant Sega Saturn as strength training and a handy weapon. In Smash, Segata would likely be a tough and agile melee character with brutal Special Moves and taunts that encourage the playing of Sega Saturn. 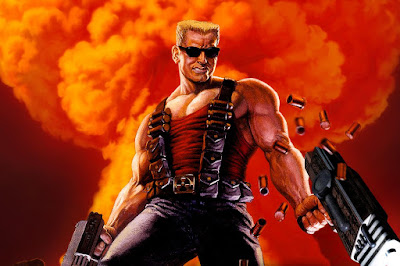 I said these were silly, and there are few video game icons sillier than Duke Nukem. For the younger readers of Lead Capes, the classic Duke Nukem games were actually a lot of fun, with "Duke Nukem 3D" actually being something of a deconstructionist classic, not that we got that at the time, we just liked the blood and boobs. Duke is a goofy spoof of the '80s action hero, complete with buzz-cut and tank top and really only seems more at home in the current era of poorly-shaven, Caucasian "dude-bro" game protagonists. With all of the sword-based characters in Smash, why not a guy with guns? Also, he could "rocket-jump", because that would be a lot of fun. 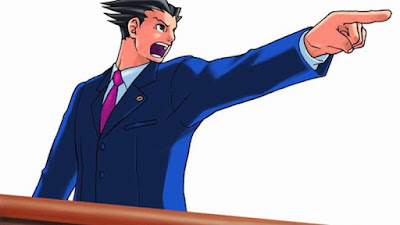 That's right, I can enjoy Japanese pop-culture without being a full-on weeb. Full disclosure, I've never played an Ace Attorney game, but I have watched a couple of the adaptations and think the character is pretty unique and enjoyable. I'm not sure how he'd work in Smash, but I would totally play him as an alternate when I didn't want to stomp one of my friends. 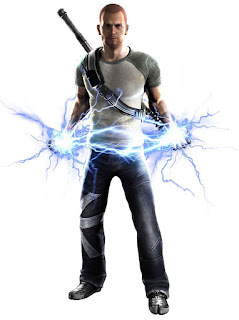 My "Superhero Media" of inFamous 2 was a while back, so for those who missed it, I thought it was a great game. Cole isn't an amazing character, but his powers are cool and Bayonetta proved that having only two games and a cool set of moves is more than enough to get into Smash. I'm not sure how it could it be managed, but some kind of switch between "Good" and "Evil" Cole would be fun, especially if it was based on player choices throughout the match. Perhaps picking on foes with higher damage brings out "Evil" Cole? I don't know, but it sounds like a fun mechanic. 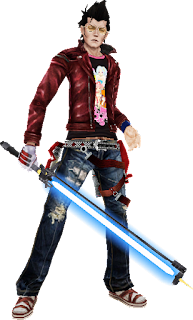 The real question is how has this lightsabre-wielding, Otaku assassin never been in Smash before? No More Heroes was a brilliant game that used mechanics to tell the story in a way few video games manage. Suda51 has mentioned several times that he'd like to see Travis in Smash, so that's at least two people who would be happy to see him again. Play wise, I'm thinking a hard to control sword character with some randomness to him. Much like Conker on a previous list of mine, Travis could easily keep some of his adult humor, so long as it was subtle enough to go over the heads of younger players.
Think I'm done? Not yet! There's at least a couple more of these I want to do, so stay tuned for more Smash stuff in the future.
Posted by Hat Guy at 4:02 PM