Controversial statement time, The Dark Knight would not make my "Top 10" superhero film list, were I ever to do such a thing. The Dark Knight is an excellent film, no doubt, but I would posit that it is not, in fact, a superhero film, given that the 'hero', Batman, is largely incidental to the happenings in the narrative. I am not the first to point out that Batman is not the 'true' protagonist of The Dark Knight, however, unlike many critics, I would suggest that it is not the Joker who drives the narrative of the film, but rather, Harvey Dent. Throughout The Dark Knight, the audience is taken on the journey of the "Rise and Fall of Harvey Dent", from his time as a crusading District Attorney through to his death as the villain Two-Face. For starters, let's take a look at what Batman actually does in this film; really, he does only three things that matter all that much. One, he violates the borders of another sovereign nation to kidnap one of their citizens and detain them illegally until they can face trial in the United States. Two, he rescues Harvey Dent, though not before Dent is injured. Three, he makes a civil-rights violating sonar device that surveils the entire city without anyone's knowledge or consent. 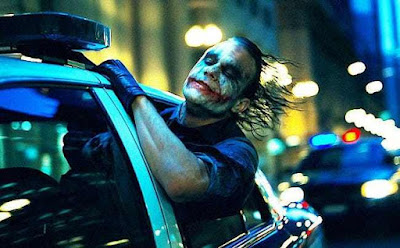 The reason I tend not to count The Dark Knight as being among my favorite superhero films, is that the superhero in the film, Batman, is largely incidental to the plot. The few incidences where Batman's presence makes an impact, as discussed above, certainly don't paint him in a favourable light. Given that these articles aren't written in the order they're published, I'm not sure if I've spoken about Objectivisim on this blog yet, but let's just say I find the Post-Miller tendency to paint Batman as an Objectivist icon to be highly problematic. Hell, Dent himself rejects the idea of unchecked heroism as a universally positive force, "You either die a hero or you live long enough to see yourself become the villain"; referencing, for emphasis, the actually contentious historical figure of Julius Caesar as an example. Whilst we're on the point of BatRand, that the character seems to believe that only he is qualified to be the savior of Gotham specifically because he's rich, "I'm not wearing hockey pads", is, frankly, somewhat disgusting, especially seeing has he inherited his wealth and did nothing to earn it. For a character whose intelligence is such a factor in his comics, the Batman of The Dark Knight relies a great deal on the work of Lucius Fox, James Gordon, Alfred Pennyworth and Harvey Dent in order to actually achieve anything. 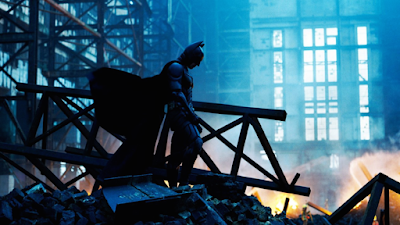 Wow, I'm not even up to Dent and Rachel yet, this one's going to run a bit long sorry. I don't want to go so far to call Nolan a misogynist, but he doesn't put too many women in his huge, male-ensemble, films does he? Rachel, the character we're supposed to believe is driving the actions of both Batman and Dent doesn't make it out of the second act alive. As I said in the Batman Begins article, Batman has a host of interesting female characters to draw upon, but Nolan only uses a damsel in distress, it just grates when you think about it. Harvey Dent is amazing in this film, failing and "falling" through no fault of his own, finally getting what he wanted (we find out in the next film) at the cost of his own life. That the narrative doesn't centre around Dent is baffling, everything about him is cleverly laid in; we know from the "die a hero" line that he is prepared to give everything to his cause, something Batman doesn't consider until the closing minutes of the film. The coin is a fun element to Dent's character with the reveal of the two-heads coming at just the right time before the subversion at the hands of "Harvey Two-Face" and all the fun to be had there. Two-Face is probably my favourite Batman villain and The Dark Knight is one of the best interpretations of the character, I was actually annoyed when he was killed at the end, even if it is a good narrative choice for the film. 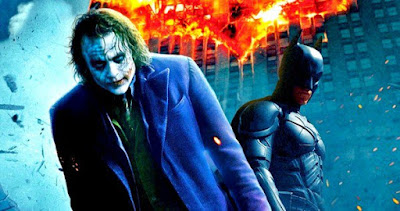 I almost feel like I don't need to talk about the Joker here, as so many people have done such a better job of it than I will. Seriously, check out the YouTube video "Movies with Mikey: The Dark Knight", he does about the best take on the Joker that I've seen, even if I disagree with his contention about The Dark Knight's protagonist. Personally, I still prefer the BTAS or Batman (1989) interpretations of the character, as they're more in line with my experiences with the comics, cracking more jokes and having a sense of sinister fun is essential, in my view, to portraying the Joker. The Dark Knight remains a magnificent film, even if each of my subsequent viewings turns up more issues for me to quibble against; I think that's the nature of examining popular culture too closely, everyone has a different interpretation and most are at least somewhat valid. Is Batman an Objectivist icon or hero of the people? Is the Joker the true hero of the film, or an avatar of lawless societal decay? Is Harvey Dent a failed hero, or was he destined to always be a martyr? I can't make these decisions for you, but I can give my opinion and encourage you to seek out more writing and academia about this film.
Posted by Hat Guy at 3:26 PM