My DVD copy of Hulk (2003) comes with a teaser trailer of this film, which essentially features a CGI Thunderbird 2 landing outside the British Houses of Parliament to the strings of "Boys are Back" by Thin Lizzy. Suffice to say, I was pretty stoked when I came across it one day. The final product, by which I mean the trailer for the actual film, made it look like Spy Kids with a coat of Thunderbirds paint, so being the discerning teenager I was at the time, I gave it a miss. Flash forward too many years and I finally gave Thunderbirds a watch and was pleasantly surprised. Yes, the focus on the child characters does injure potential enjoyment of the film, but the framework around the children is actually really good. Seriously, the props, sets and design of this film makes the Thunderbirds feel more "real" than pretty much any other version of the characters. 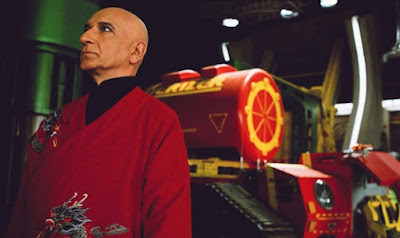 The story works well enough, The Hood and his cronies conceive a plot to draw all of the Thunderbirds to Thunderbird 5, then steal the remaining craft to run a series of bank robberies and simultaneously discredit International Rescue. It's a good enough plot for the film and whilst I always like Ben Kingsley, having him play an Asian man is really something that shouldn't have happened in 2004. The saving grace of the film is the delightful double-act of Sophia Myles as Lady Penelope and Ron Cook as Parker, their comic timing and banter may well be worth a watch alone, plus the FAB 1 design is pretty funky as well, with a fun retro-futurist look. Sadly, there's not much to film that would translate well to Supers gaming; International Rescue being framed is more of a RPG set-up for a group like MI-13 or the Croatoans than a straight-up superhero fight. 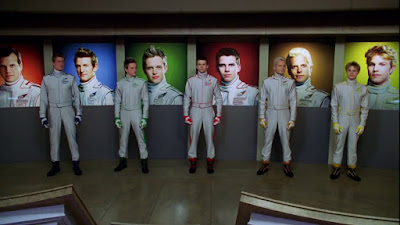 Despite the fan vitriol online, I don't really think that there was a "better" version of live-action Thunderbirds that could have been brought to the big screen. Sadly, the franchise simply isn't popular enough to carry the kind of film that the adult fans want to see. I don't actually think that's really a bad thing, I have no desire to see a "grim and gritty" take on Thunderbirds, I really feel that would defeat the purpose of the story. There's a Doctor Who novel entitled "The Indestructible Man" which features a corrupted and collapsed International Rescue style organisation, and whilst the book is enjoyable enough, it didn't make me yearn for more deconstructed Thunderbirds material. Thunderbirds is really a "watch it or don't" case, it's not great but there's also nothing really that bad about it. Except for Hans Zimmer's terrible re-working of the classic theme; why do we let that guy play with existing songs? It never ends up any good.
Posted by Hat Guy at 3:50 PM