Probably what shocks me the most about The Punisher is how much people enjoyed it whilst I found it painful to watch. There are a few things happening here, firstly, I actually really enjoy the Tom Jane The Punisher film from 2004 and have a soft spot for Punisher War Zone from 2008, as they do pretty decent jobs of adapting the source material, inherit flaws and all. Second, as you've seen before this, I felt the Netflix Iron Fist series was hard done by critics and fans and was much better than anyone seems willing to give it credit for. Third, and final, I'm a big fan of Punisher Comics, especially the Garth Ennis MAX run, which both the Netflix series and War Zone borrow from heavily, though not always successfully. At the risk of sounding like a hypocrite, The Punisher is simply too lacking in action, yes I am the same man who constantly rebukes the call for more "R" rated superhero fare, but the Punisher is one of the few characters I really feel demands such extreme content. 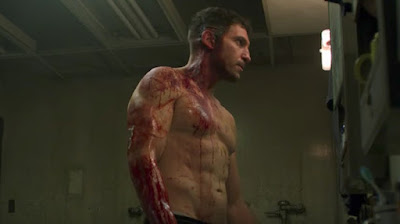 In Narrative Theory, there is a concept often known as the "engagement curve" or "pacing curve", an algorithmic framework for keeping an audience's attention that "good" works of fiction manage to include. Star Wars, The Avengers and Jaws all manage this curve, or pretty close to it. Ideally, each individual episode or issue of a series will follow this curve to some degree, as well as the complete narrative as a whole. To my mind, none of the Netflix Marvel programmes manage the engagement curve very well, each feels a few episodes too long, but this is often difficult to notice with the great casting and binge nature of Netflix viewing. The Punisher was the first time I was bored watching one of these programmes, and, as a Punisher fan, that really pisses me off. There is an episode where the narrative centers around Frank and Micro getting drunk, talking about their wives, then Frank makes soup. What the fuck? I'm not saying that every episode needed extreme violence, but the Punisher makes soup? I had to stop watching for a couple of months after that. 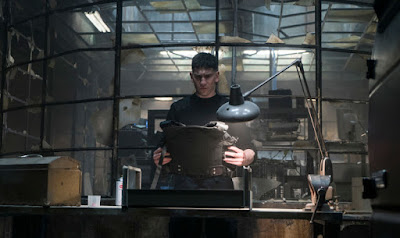 There are quite a few gunfights in The Punisher, and plenty of over-the-top violence, but they're pretty spread out and Frank doesn't even wear his costume until the last two episodes. Did the writers think that we hadn't had enough of the origin in season two of Daredevil? By the way, the best gunfight in the series doesn't even feature Frank, it involves some Mercenaries and the Feds getting into a shoot-out. I really can't understand how this turned out this bad, the roadmap to this character is in the Garth Ennis comics, "Kitchen Irish", "Up is Down and Black is White" and "Mother Russia" are all prefect stories to adapt to the Netflix model; even cramming two together may actually fill out the bloated 13 episode season. How bad is this? Tom Jane's fan film Dirty Laundry is a better representation of the Punisher than this series. I really hope there's a major change behind the scenes before the next series. What a disappointment.
Posted by Hat Guy at 4:45 PM