I saw this one on Netflix and decided it was worth a go, I remembered liking it and it's not like there are a lot of good pulp/steampunk films anyway. In the years since I last watch Wild Wild West, I've seen a number of reviews that really tear into the film, rating it very poorly and steering people away from it; that's not fair. Sure, Wild Wild West is silly, but it's a fun silly and is also possibly the most subversive Hollywood film I have seen in years. No, really. For starters, Kevin Kline's Artemus Gordon is pretty heavily trans-coded and not in a negative way. The name "Artemus" reads like a masculine Artemis, Hellenic Goddess of war and the hunt, indicating a transition from female to male, this is corroborated by the character's comfort in female clothing and lack of self-judgment for wearing it. Artemus is fixated on his skill in creating things (typically read as female in literature) being seen as the equal to Jim West's strength, agility and combat prowess (typically male traits). Finally, Artemus' prosthetic breasts are under-sexualised, as if he has an active distaste or them, which is undercut by his attraction to Rita. Not great evidence, but it's there. 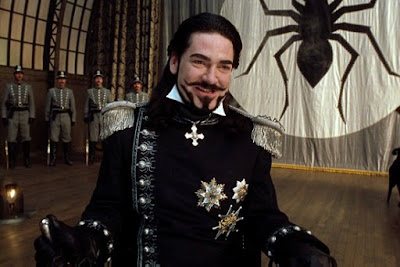 The big twist I wasn't expecting when watching this film again was the epiphany that Dr Loveless is, in fact, the good guy. Unless, like Jim West and President Grant, you happen to be in favour of genocide and American colonialism. You see, Loveless' plan involves dissolving the United States and handing land back to France, the British Empire, Mexico and the Native Americans, as well as carving out a chunk of the Pacific Northwest for himself. That's right, the "bad guy" of the film plans to return Manhattan to the native tribes, complete with diplomatic recognition by and protection from Europe. Sure, more power to "Imperial" Europe isn't great, but that'll get fixed come 1914. Many of Loveless' henchmen are wounded Civil War veterans who fought for the South and were left to rot by the victors; Loveless made sure they got the best medical treatment and prosthesis available at his own expense. Despite his many, debasing sexual comments, Loveless employs several women in positions of authority, most of which require an education not available to many women at the time, in contrast Rita is shown to be incompetent and only able to follow the men around, the same men that constantly treat her as an object. 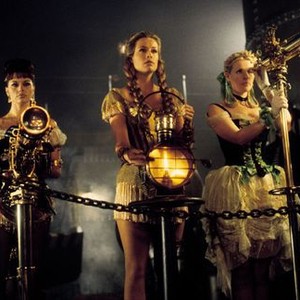 Finally, even though Loveless fought for the South in the war, he holds shockingly little racial prejudice (don't at me, apologists, the South fought for the right to own slaves, deal with it). When funding his scheme, Loveless milks money from rich Southern landowners who are funding a second rebellion, then turns around and guns down General McGrath's soldiers to prevent an uprising in the name of the Confederacy. And although Loveless throws more than a few racial slurs at Jim West, he works fine with other African-Americans and Native Americans, he only dislikes Jim West because Jim West is directly responsible for crippling him. Also the film has a steampunk spider mech and rail tank? Man, I didn't even talk about the assassins hiding in the paintings, which was pretty cool too. I wonder how many films actually have the protagonists working to take down the "real good guy"? I need to go back and watch some stuff again.
Posted by Hat Guy at 4:16 PM