This one's going to be a bit short, as most of the Dragonball "movies" come in at under an hour's run-time, tending to focus on a single fight, enemy or concept. Were I to boil down A Hero's Legacy to its base components, it would come out as "Dragonball Stand By Me", which, as far as I'm concerned, is high praise indeed. Decades after Goku departed for a higher existence, Goku Junior, grandson of Pan, is struggling through both training and primary school. Yes, Goku Jr is actually bullied, unwilling to use his immense power to help anyone, even himself. This view gets challenged when Pan gets ill and Goku Jr starts out on a journey to find the Dragonballs, which haven't been seen since Pan was a girl. 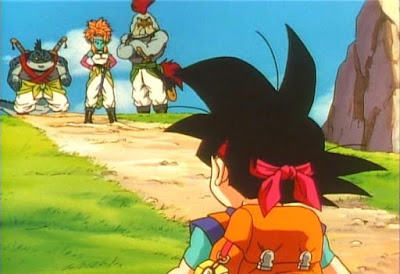 Quite by accident, Goku Jr's bully ends up coming along for the journey and that's where Stand By Me gets evoked pretty strongly, which I do feel is probably deliberate, given the amount of Western pop culture that Toriama is prone to referencing. Did you know that Yajirobe is a take on John Belushi's samurai from Saturday Night Live? You do now. You're welcome. The pair overcome their differences to become friends and work together to outsmart a trio of monsters set on eating children. Goku Jr finally comes to Grandpa Gohan's house, from the first episode of Dragonball, where he finds the Four-Star ball and is greeted by Goku himself. Goku and Goku Jr have a talk about power and responsibility and the duty of the strong to protect those weaker than them; it's a good scene and probably is the closest to anything like a philosophy for Goku across the franchise. 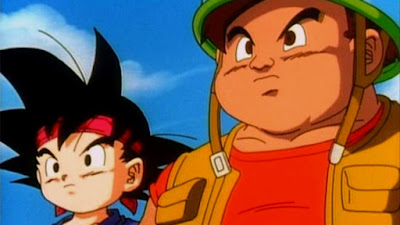 All in all, A Hero's Legacy is somewhat unnesescary, not really adding a great deal to the saga of Goku and not giving an ending any more satisfying than what was in Dragonball GT. What A Hero's Legacy does is give a sense that, no matter what, the Dragonball story will never end, it has become a legend that will keep going, like Robin Hood, Sherlock Holmes or Superman. Part of me is actually interested to see what happens to Goku and friends once Toriama either dies or abandons the franchise entirely; once other creators get to tell their own stories with the characters without oversight from their creator. Already, the 'conflict' between the GT and Super stories makes for interesting possibilities, an exploration of the alternate time-lines could make for some interesting adventures for Goku and pals, but time will tell.
Posted by Hat Guy at 2:37 PM