Steady progress is the best progress, I find. 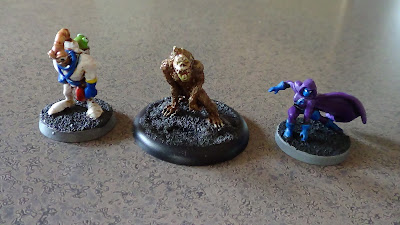 Earthworm Jim is a 3D print a friend found on eBay, he's a little small, but captures the look of the cartoon nicely.
"Sewer Monster" from Big Trouble in Little China, part of a North Star miniatures set.
The Spoiler, Heroclix, but another pretty nice one, especially given the character's relative obscurity. 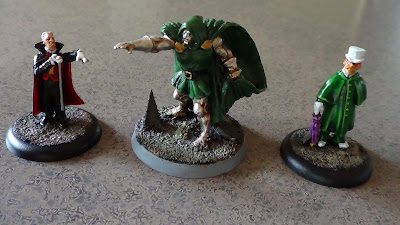 Dracula from Studio Miniatures, supposed to evoke Christopher Lee, but reminds me a little of Leslie Nielsen.
Doctor Doom, a Heroclix I use with my SOTR Latveria army, probably a little big, just did some touch-ups on him.
Mad Jim Jaspers, Eureka Civilian, was the best I could find, I think the white hat and purple umbrella help bring this class Captain Britain villain to life.
Posted by Hat Guy at 2:02 PM