From what I can tell, this animated film is an adaptation of the "Terra" story-line from New 52 Teen Titans comics, but I may be wrong about that, I really didn't do much research sorry, having never really been a Teen Titans fan. As a film, The Judas Contract isn't great, but I've felt that about essentially all New 52 animated adaptations, so I'm suspecting that the problem lies more with the original material than the crew working on the films. The story opens with the 'original' Titans (for this continuity) driving through a city when a sudden alien attack introduces them to Starfire, then there is a jump forward a number of years and the real narrative begins. Nightwing has returned to the Titans, supplanting Starfire as their leader, creating tension, especially around the newest member, Terra. 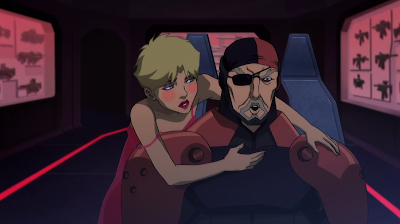 Thanks to Young Justice and Teen Titans (animated), I do know who Terra is (had a Heroclix once, too), but The Judas Contract taught me that her real name is also Terra. Now, I used to have a client with that name, so that didn't get to me that much, but why is her superhero name the same as her real name? It's not like Superman calls himself "The Incredible Kal-El". That annoyed me to find out, but I'll admit to getting hung up on dumb facts like that, what really started to get to me were the "romantic" elements of the plot. Teen Titans has always been pretty heavy on the romance, which fits the idea of teen and youth superheroes, and I have no problem with it being a feature of the stories, but it's how these romances are written in The Judas Contract that grates. Nightwing and Starfire are actually well handled, it's nice to see them in a long-term, stable relationship and taking the next steps. 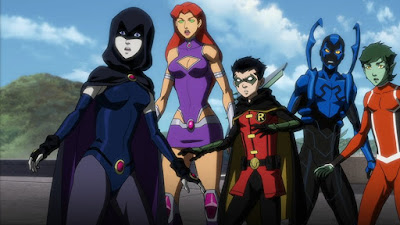 Beast Boy, however, is stalking and harassing Terra with a dedication that can't come across as anything other than creepy. Take 'no' for an answer or she's well in her rights to call the cops, Gar. The worst though, is Terra's attraction to Deathstroke, which, rather being played off as the adolescent crush of a grateful, but confused, abuse victim on her rescuer, is overtly sexualised in the most creepy way the writers could manage. As in, the language Terra uses to express her feelings to Slade leaves no room for doubt as to what she wants to do with him. Terra is 15, 16[?] and Slade has to be in his fifties, I don't care if he's reciprocating or not, it's creepy and should have been caught by the editor. The Judas Contract is probably one you can skip, unless you really feel like a good scoop of inappropriate sexual conduct with your superheroes.