Back at the liquor store for a little while, so more time to paint whilst I can't afford new minis. 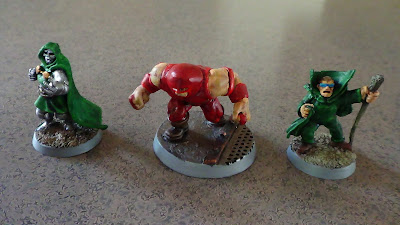 Doombot - Actually should be the last one I need, as I use them for a unit of German "Dhrones" in my Secrets of the 3rd Reich Latverian army, which I'm finishing on the side. Heroclix

Juggernaut - A touch-up of an old paint job, I'm honestly thinking I need a bigger mini after seeing Deadpool 2, maybe sculpt some prison fatigues on him. Heroclix

Mole Man - Well, now I'm committed to buying a bunch of Moleoids and giant monsters and painting them, what a shame. Heroclix 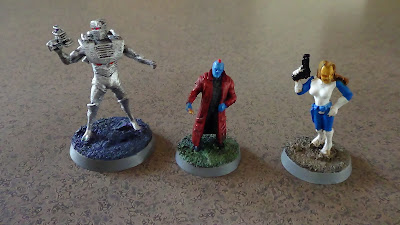 Rom the Spaceknight - Had to have a Rom, such a major character in Bronze Age Marvel Comics and another "Space Hero" to add to the eventual Annihilation campaign. 3D Print

Yondu - Not many more Guardins of the Galaxy to go for me, at least until they release more characters in the Heroclix. Went for the film version of the character because he's more recognisable and more fun. Heroclix

Madame Masque - I've got my girlfriend reading the Hawkeye Kate Bishop comics, so she asked if I had the characters in miniature. Found Masque in my box of spares and painted her up. Heroclix.
Posted by Hat Guy at 5:02 PM

Email ThisBlogThis!Share to TwitterShare to FacebookShare to Pinterest
Labels: Marvel, Painting and Modelling