Despite my near-constant insistence that more "obscure" DC characters like Bootser Gold and Batwoman are the more entertaining, I've never gotten around to reading any Black Lightning, so I was kind of excited to see what Warner Bros and Netflix put together. For the most part, Black Lightning is rather good, with a solid core cast, strong social conscience and a banging soundtrack, but being both a WB television series and a Netflix production, Black Lightning gets to enjoy the failings of both. Like most of the Marvel Netflix efforts (the exceptions are Jessica Jones S1 and Daredevil S2), Black Lightning is around twice as long as it needs to be, with too many villains and conflicts to really hold much interest. Seriously, the villains for this single series include Tobias Whale, Syonide, Kahlil Payne, Lala, Lady Eve, the 100, corrupt cops and a secret government department; that really feels like several seasons worth of antagonists to work through. I really still have no idea what Lady Eve's deal was and where the hell the 100 (a street gang) went after the fifth episode. 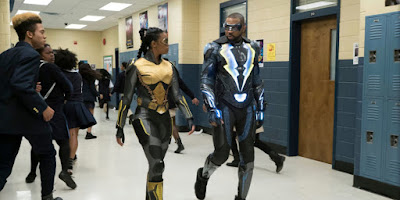 Like, Lady Eve can raise the dead and none of the other villains seems to think that it's worth talking about, like it's a pretty normal thing in their world. On the villains, Tobias is played by Marvin 'Krondon' Jones III, who is really unsettling in the role, but I just kind of find him unsettling in general, in a way I can't put my finger on, I actually tended to skip his sequences. Just a weird personal thing I guess. Lady Eve keeps threatening to kill Tobias and grind him into powder for magic (she's magic, which fits perfectly in the science-heavy setting), but that never really gets addressed either, because she is killed off about halfway through. In this version of Black Lightning, the titular character, Jefferson Pierce, has given up his heroic identity to be principal of a local high school and raise his daughters, when gang violence and drug crime drag him back into the costume. Complicating matters is a new drug "Green Light", political pressure on the police to bring in Black Lightning and Pierce's daughters both demonstrating powers. There's just so much constantly going on, but still not a lot, it's a weird mix that never quite comes together. 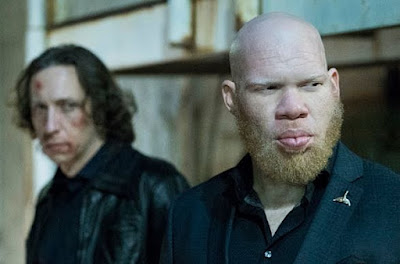 Much of the plot of Black Lightning could be cut without losing most of the good character moments, as points are repeated and similar scenes play out again and again. Remember me complaining about the arguments between characters in Arrow being repetitive? Same deal here. The music, mostly funk and soul, is great, even if it feels like a lesser imitation of Luke Cage. What really makes Black Lightning shine is the action sequences, effects-wise it's a bit patchy, but it's television, so hey, but I don't recall having seen powers like this used on screen in such an engaging way. None of the fights get boring or repetitive, like in early seasons of Arrow, and the flash of lightning in dimly-lit alleys makes for stark contrasts. I think Black Lighting could have been made better with a few more edits, as it seems like there's too much going on in almost every respect. Too many characters, too much exposition, way too much repetition of ideas and themes and too many villains. Hopefully a second season will see some improvements and Black Lighting can become a cultural touchstone like Luke Cage and Black Panther before him.
Posted by Hat Guy at 4:14 PM