Superhero Media: Sky Captian and The World of Tomorrow

How come no one ever talks about this film? I know maybe a half-dozen people who have even seen it, which is a shockingly small number when you consider that most people I know are some kind of nerd. A spiritual successor to the likes of The Rocketeer and The Mummy (1999), Sky Captain and The World of Tomorrow is a pulp sci-fi adventure, complete with two-fisted fight scenes, plucky gal-Fridays and ray guns. When scientists start going missing, plucky, no-nonsense female reporter, Polly Perkins starts investigating and is soon caught up in a whirlwind of action and robot attacks, throwing her into the orbit of her ex-boyfriend, the titular Sky Captain. As the pair investigate the machinations of the villainous Doctor Totenkoph, they bicker and go over their former relationship, bouncing around the globe, but never getting past their past. A climatic battle with ray guns, flying machines and a space-ark finishes the film and we're shockingly left without a sequel tease. 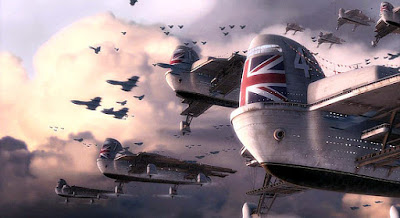 The major novelty of Sky Captain is that almost the entire film was shot on green-screen, with the actors being essentially the only "real" things in the frame. It was a bit of a bold move, but kind of makes sense with the kind of film that Sky Captain is trying to be. The high-concept pulp tone, with flying aircraft carriers, giant robots, ray guns and dinosaurs really only would have worked with an animated or effects-heavy feature, and as a film-making concept, Sky Captain does work, but not quite all of the pieces come together and the final result is disappointing. I think part of the issue was the film being a little too ambitious, calling upon recollections of Indiana Jones and The Mummy films, but not being quite as engaging. The lead actors (Gwyneth Paltrow as Polly and Jude Law as Sky Captain) are not well cast, neither having the kind of style or look that "Sassy Gal-Friday" and "Two-Fisted Adventurer" demand. The concept is a little high-minded for the content of the film, though ideally placed in the Pulp genre, the only films most audience members would be familiar with are more along the "thing good/Nazis bad" kind of line. 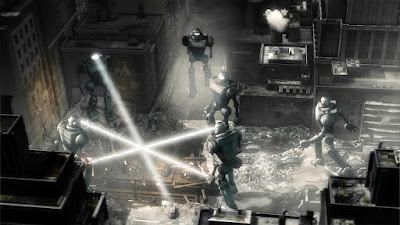 I'm shocked that Sky Captain isn't a bigger cult film, like Flash Gordon or Big Trouble in Little China (though those are both far better), the only spaces I tend to see it mentioned are those that deal with famous flops or big Hollywood failures. As regular readers will know, I'm a big fan of Golden Age comics, pulpy tone, unfortunate language choices and lack of continuity included, I wish there were more films that went there and made a real go of it. Yes, I have The Rocketeer, Captain America: The First Avenger, The Shadow, The Phantom and Wonder Woman, but I'd like to see more be successful so that maybe one day I can get good versions of The Green Hornet, The Spirit, The Woman in Red and Stardust the Super Wizard on the big screen one day. I feel that if Sky Captain had been a bigger hit or was actively enjoying some favorable attention from the internet, that pipe-dream may be a little closer to reality. If you haven't ever seen Sky Captain and The World of Tomorrow, check it out, it's at least unique and fun, if not overly compelling.