As the resident "Comic Book Nerd" in most of my social groups, I often get asked which comics people 'should' start reading. My usual response involves trying to find a character or kind of story in which someone may be interested. For most of the major characters in comics, I can recommend at least one or two series or trades worth picking up. For Captain America, I'm always keen to suggest The Ultimates, Secret Empire, Fallen Son, War and Remembrance and, of course, the magnificent run by Ed Brubaker. Opening with the shock assassination of the Red Skull, the Omnibus Edition (from which I'm reading), runs through the Winter Soldier story-line before culminating in the Death of Captain America. It's a hell of a read, and probably one of the best continuing series in the history of Marvel Comics. Brubaker has such a regard and talent for these characters, that his have fast become the definitive versions of even obscura like Master Man, Union Jack and Doctor Faustus. 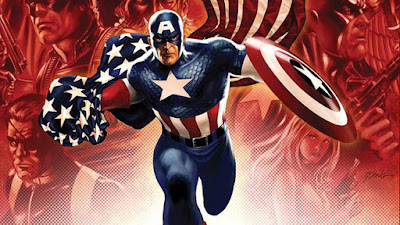 Probably the strongest recurring theme of the Brubaker run of Captain America is the juxtaposition of the pulpy, Golden Age adventures of Cap with his current, espionage-driven conflicts. Seeing the classic costumes of WWII-era heroes and villains realised by the amazing artwork of Steve Epting is a huge fanboy thrill for me, but also helps contextualise the classic Cap and Invaders stories brilliantly, rather than waving them away like The New 52 or Batman RIP. The Captain America presented in these comics is an icon, a legend, but also a man out of time trying to do the best he can against impossible odds. It's no wonder that the MCU has followed the broader strokes of these comics in bringing their own Captain America to pop-culture dominance. By the way, isn't it really cool that Captain America is one of the most popular characters in the world at a time when the real USA is steadily transitioning to fascism under the "leadership" of a failed businessman turned reality television star? Oh, don't start, regular readers will know I'm pretty damn far to "the Left". 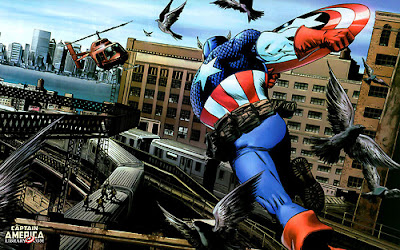 Although much of this run of Captain America has been adapted elsewhere, they're still worth reading as some of the best examples of both the characters and the broader use of the 616 Marvel continuity. Yes, you don't need to have read the classic Captain America comics to enjoy the emotional connection between Cap and Sam Wilson, but the fact that it is there is the strength of never really having done a "line-wide reboot" really helps. There's also great stuff with Doctor Doom and AIM if you're into that kind of thing, which I am. After the death of Cap, Agent 13, Sam Wilson and Bucky come to the fore as characters, trying to solve the mystery of Cap's assassination and thwart the evil plans of he Red Skull to destroy America. It's at once brilliantly camp and comic-booky and totally compelling. A must-have for any collector of Captain America, Marvel or simply great comics.
Posted by Hat Guy at 1:33 PM