Best game in the series, hands down. Off the back of Going Commando, the adventure starts with a news report of planet Veldin being attacked by the alien Tyhrranoids and Ratchet loading up the ship for a return home. From the first landing, Ratchet and Clank are thrown into a Galaxy-wide war against Doctor Nefarious and his Tyhrranoid allies, fighting alongside the Galactic Rangers, a team of Robot soldiers. The whole game feels like a natural progression from the previous two, growing bigger without feeling bloated, building on the foundations set way back in the first game, but still being of something new and interesting. Despite the fact there are things that would be done better in the Future games on PS3, Up Your Arsenal still finds the high watermark of the series because it comes across as the most 'complete', with all of the elements being improved from the previous games, rather than introduced here. The weapon-leveling is better, though needing to get through 10 "levels" does make it feel more like a chore at times than a reward. The Skill Points also work really well here, fitting into the game organically and being fun to shoot for. 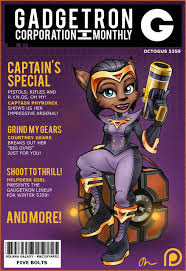 Unlike a great many Sci-Fi/Fantasy games, the "battle" sections of Up Your Arsenal really create a hectic atmosphere and evoke the mood of being in the midst of a war, even if the Galactic Rangers rarely demonstrate a great deal of competence. The new villain, Doctor Nefarious, is used well, with a good balance of humour and menace that easily makes him the best antagonist in the series. Also not having anything tied in with Ratchet's origins really helps Nefarious as a character in his own right, especially retrospectively, when it will turn out that all of the Future antagonists have another piece of the puzzle that is the disappearance of the Lombax species. Nope, none of that, instead we get a building of the characters we've come to know and love, with Clank being the "breakout" character of the pair in their own setting and Captain Quark getting a close to his narrative arc. New characters like Laurence, the irreverent robot butler and Sasha, probably the only potential love interest for Ratchet that is also interesting in her own right, also bring up the overall quality. 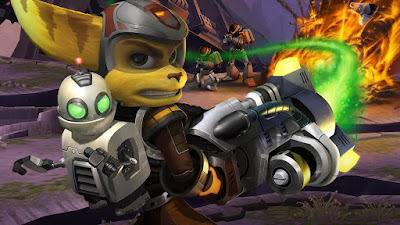 I will never get sick of playing this game, everything about it just works for me in a way most video games don't. Unlike the previous games, there's not too many sections of "busy work" and, unlike the next games, none of the weapons are functionally useless. I'm still not fond of Captain Quark, but he does reach a good character point here, just a pity he keeps coming back. There are so many little things I could list here that really stick in my mind, like the Swingshot and Dynamo becoming the one item, having multiple quick-select rings, ship upgrades only costing bolts rather than another resource and only one set of collectables that trade for cash. Not that I'm the kind of blogger inclined to do something like a "Top 10 Video Games" list, but if I were, Up Your Arsenal would be on there somewhere; I will keep playing this for as long as I can get something to run it. I really hope Insomniac do something good with the characters again at some point, but we'll get to that as we get to later games.
Posted by Hat Guy at 4:05 PM