Is this the one everyone hates, or is that the next one? All I remembered was the giant Decepticon with the wrecking ball testicles, and that didn't bode well. I held out some hope during the first act of the film, as Revenge of the Fallen opens with a joint US Army/Autobot task force taking down Decepticons across the globe, which really should have been the entire damn film, as Josh Duhamel makes a much better protagonist than actual cannibal Shia LaBeouf. Before too long, Optimus Prime is dead, Megatron is alive and there's some kind of global chase for the Matrix of Leadership which can either destroy the planet or resurrect Optimus, or something like that, I wasn't really paying close attention. There's just something about Revenge of the Fallen that glosses past the mind's eye without really registering, like eating chips, you don't realise how much you've had until it's gone. 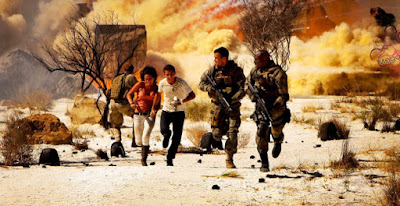 The last act of Revenge of the Fallen is probably the most interesting to take a look at, with military forces and Autobots protecting the corpse of Optimus Prime whilst Sam races to them. The sequence is fun to watch, Bay can shoot the hell out of an action scene and has a particular eye for soldiers and military equipment, but there are some really distracting elements. Firstly, the USMC flies into Egyptian air-space without permission, shooting at an army of alien robots that have been covered up for years. When the Egyptians twig to what's happening, their own military flies in to "help", or presumably tell the Americans to get the fuck out of their national borders, but they get shot down by Decepticons so that the white people can save the day. Also, I swear Sam is running for a good forty minutes, the film just takes forever to end, I was sick of seeing Actual Cannibal Shia LaBeouf fall into the sand. 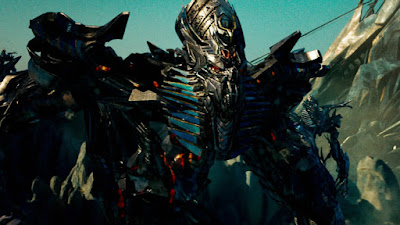 Revenge of the Fallen is not a good film, but whereas the first Transformers was enjoyable despite it's flaws, this one is really hard to get anything out of. The only parts I can remember liking were the old Prime talking about the Autobot/Decepicon divide being a political one and Optimus rocking that sweet jetpack, but similar scenes in Transformers Prime are much better if that's what you're after. Despite the flaws, problematic characters and terrible dialogue, there is something to these films that makes them somewhat compelling; for me, I think it's how well they defy traditional analysis, but if they're really that bad, how are they still making more of them? I'm not sure why this series is a big as it is, but I will keep watching them, so long as I can do so without paying money.
Posted by Hat Guy at 3:12 PM