As many readers of this blog will know, I'm a bit of a Kaiju fan, though my heart belongs to the Gamera franchise rather than the powerhouse that is the Godzilla series. Naturally, I'm not keen on Western adaptions of the genre, even finding Pacific Rim a little disappointing; there's a particular nuance to the Japanese films that doesn't quite translate, I think it's a cultural thing. I hadn't heard much good about the 2014 Godzilla, things like the trailer not being representative of the final film or the Kaiju not being in enough of the focus, but my motto being "It can't possibly be as bad as Super Buddies", I gave it a watch. I actually enjoyed Godzilla, in terms of tone and framing, it was close to Gamera: Guardian of the Universe, probably my favorite Kaiju film, but with an obvious Hollywood styling. The slow reveal of the Kaiju even got me a little excited, and there was more than enough action in the third act to make me want to see more of this new Godzilla "universe". 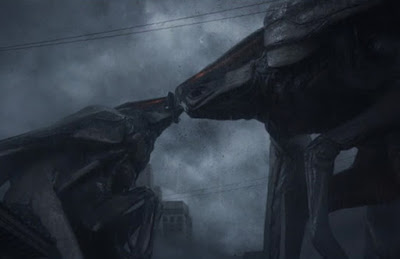 I think the actual "problem" with Godzilla isn't so much "not enough Kaiju" as it is "no decent protagonists that aren't Kaiju". Seriously, I can't remember the names of any of the human characters, I just kept calling them Kick-Ass, Scarlet Witch and Ken Watanabe in my head, but, honestly? That's not a problem. Godzilla vs. King Ghidorah is considered one of the best films in the Kaiju genre, I've seen it at least a half-dozen times and always love it; I also cannot name any of the characters in it. I just call the leads "Japanese Matthew Perry" and "hot future chick" in my head when watching and it doesn't detract from the film at all. In that, I think that Godzilla is probably the "best" American Kaiju film so far, if we're using similarity to the Japanese source material as our yardstick, which I am. The idea of doing a "cinematic universe" out of Kaiju is really smart once you think about it, because the studios never need to keep the same actors between films. Audiences are only really showing up for the big monsters anyway, so whoever you can get will work fine as the human interest. I'm hoping this one doesn't die like "Dark Universe". 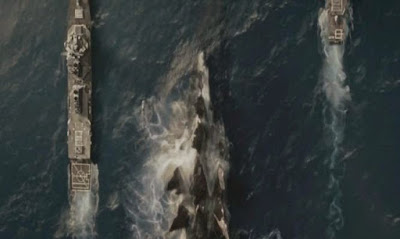 No, this isn't as good as most of the "real" Godzilla films, but it's good that there's an option out there for potential Kaiju fans that don't come will decades worth of canonical baggage. With teases out for Mothera and King Ghidorah already plus the Kong: Skull Island "prequel" having come and gone (I'll watch it soon) there could be a lot to enjoy here for new and old Kaiju fans alike. One day I'd like to see Gamera make it across the Pacific in a film as good as Godzilla, though I may have to wait a while as no one really seems to know who he his. I'm also hoping that the Western Kaiju films can lose the "Army Porn" aspect that's already polluting the Transformers film franchise. Soldiers and tanks fighting giant monsters and robots look cool, but in American films, there is always an undercurrent of it looking like an elaborate recruitment video. Maybe it's a cultural thing.
Posted by Hat Guy at 4:27 PM