I think a great many fans tend to forget that 2000AD comics and Judge Dredd in particular are intended as satire, or at least parody in the case of the less cleverly-written stories. At it's best, parody is intended not only to amuse, but to communicate a contention, usually negative, about the thing being parodied. The America of 2000AD is a radioactive wasteland punctuated by "Megacities" where crime, unemployment and violence are rampant. For those too young to remember the crime-ridden New York and LA of the 1970s, 80s and 90s, this critique may be lost. I'll put in in simple terms; in the world of 2000AD, when faced with the collapse of capitalism and nation-wide social unrest, the USA resorts to creating a police state where law enforcement has not only the right, but the duty to execute people in the street for minor infractions. Get it yet? Sure, you can say I'm just "another loony leftie" (Anarcho-Communalist and Anti-capitalist) reading too much into media, or you can just read the comics and see what I mean. 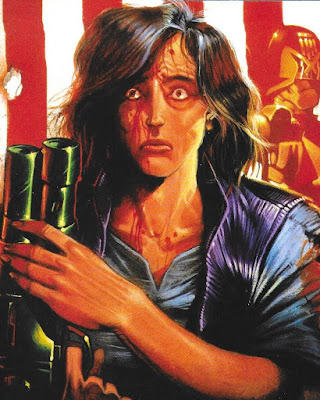 The America story centres around three characters (four if you count Dredd); America Jara, Benny Beeny and America Beeny, their lives and how they intertwine with the story of Megacity 1. The daughter of an immigrant family, America Jara grows up jaded with the oppression of the Judges and the lack of individual freedom in her new home and falls in with the dangerous "Democratic" terror movement; hey, just because the satire is obvious doesn't mean it's not clever. America's childhood friend Benny finds success as a musical comedian, able to insulate himself against the suffering of others with his wealth, though America is never far from his thoughts. When their worlds collide again, America is trapped in plan to destroy the Statue of Liberty and Benny desperately makes a deal with the Judges to try and save her. Things go south, America is killed and then the story takes an odd turn. Because Science Fiction lacks many of the logical constraints of other literature, narratives can take truly interesting turns and end up somewhere unexpected. Benny has his brain transplanted into America's body after impregnating her so that he can give birth to their child. 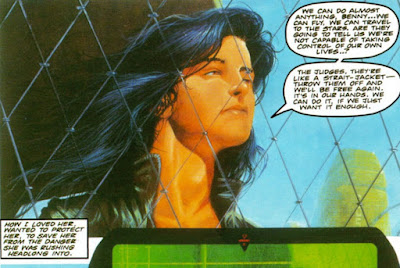 On the surface, there is more than the suggestion of rape about that move, but the continuing narrative is so damn good, I tend to let it slide. After being diagnosed with a terminal disease, Benny is embroiled in a Democrat plot to stage a mass-murder at an awards ceremony and turns to the Judges for help. Things go awry and America is orphaned, Benny is forced to place her into the Judicial Academy to prevent reprisals from the Democratic Terrorists. As she grows into a Judge, America investigates the people responsible for her mother's death and gains a reputation for leniency. America has inherited the Democratic ideals of her mother, but seeks to change the system by example, from the inside, which brings her into conflict with other Judges. Despite their ideological differences, Dredd defends and respects America, because her beliefs are honestly held and informed by first-hand knowledge, rather than idealism. America is a great Judge Dredd story, clever, poignant and subtle in ways many other aren't. If the overt silliness of the Dredd comics has you hesitating about getting into them, this is a great place to start.