As much as I prefer the Cell Saga, I do enjoy essentially all of Dragonball Z up to when Buu splits into two beings and everything starts to feel a bit padded. Something I've always really liked is Babidi and his team of villains, it's a fun collection of characters with a unique look and a nice bit of diversity. I'd actually like to see more of them, maybe in a spin-off and/or fan manga, I think they're that much fun. You can bet I'll be gathering a team as soon as Jasco get their DBZ minis game out and having them fight the Avengers, JLA or BPRD. Good inspiration for a team of villains if you're in the market, too.

The Minions of Babidi 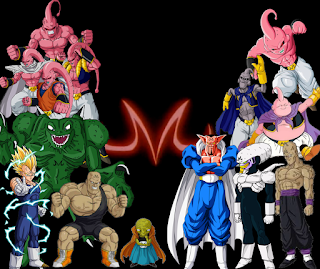 The great wizard Bibidi challenged the gods themselves in his lifetime with his living weapon, Majin Buu. When he was finally defeated, it fell to his clone, Babidi to finish his revenge. Babidi spent years gathering a team of warriors, monsters and killers to hunt down the dormant Majin Buu, becoming a feared force in his own right before finding his quarry on the backwater planet of Earth.

Babidi - The Great and Powerful 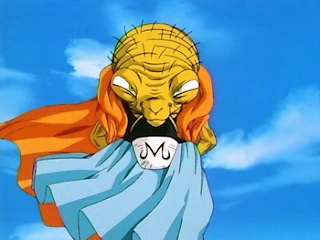 A powerful wizard, Babidi can scry, teleport and entrance people, but perhaps his greatest power is to draw out the evil in people and corrupt them to his side. Physically weak, Babidi relies upon others to do his dirty work, often disposing of his minions when they're no longer of use to him. A classic "evil mastermind", Babidi works well from the safety of his command room, sending out his warriors to do the actual fighting, maybe even finding a convenient "anti-hero" in the opposing team to bring over to his side. Great narrative potential there, think along the lines of "Majin Winter Soldier" or "Majin Hellboy".

I always have a soft spot for genuinely bad villains with a strong moral code, in D&D terms, the "Lawful Evil" kind of bad guys that will let the hero live if the fight isn't fair and care about their own ethics more than the victory itself. Majin Dabura is essentially the Lucifer/Satan figure of the DB universe, possibly literally, he is a fighter born, having led his armies to victory countless times before being brought under Babidi's sway. In the programme, Dabura is all on board for killing the gods, but once he sees the unchecked destruction that Majin Buu is about to begin, Dabura turns against his master; he simply cannot conscience the acts that will follow. Really wish this guy would come back. 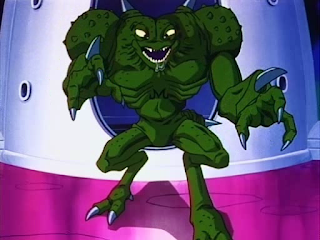 Not enough supervillain teams have a straight-out monster in them. Yakon is a monster from the dark reaches of the cosmos which feeds on light itself. Sure, he's dispatched pretty quick by the sayians, but imagine the amount of less powerful foes that he's devoured in the darkness. I'm starting to come around to the idea of having "Horror Movie" monsters as superhero antagonists, not just Predators, Aliens, Jason and Freddy, but some more generic monsters as well. Why not have a salivating, inhuman beast get released on the heroes by the mastermind? If it lives in the dark and preys on the weakest first, why not? 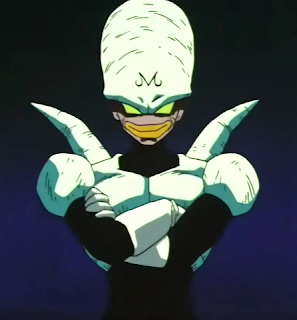 He's a bit of a joke in the series, but Pui Pui probably didn't get as confident as he was without winning a few fights. Every team needs a brawler, and Pui Pui is Babidi's, at least until Vegeta shows up. An alien from a higher-gravity planet, Pui Pui has the usual DB traits of super-strength, endurance, energy projection and flight. Not the most memorable character in the history of the programme, but there's a reason he's on the team and not everyone gets to be the protagonist. 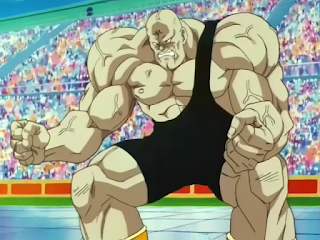 Another character I wish we'd seen more of, Spopovich was a washed-up professional martial artist who sold his soul to Babidi for power. In the World Martial Arts Tournament he is shown to be a formidable fighter, regenerating damage and seemingly impervious to pain. He would basically be the "brick" in any super team, soaking up damage and being able to dish it out when he has to. The scene where Videl has broken Spopovich's neck and he just picks up his head and puts it back is perfectly creepy and a great villain moment; exactly what I want when I need to demonstrate how tough the bad guys are.