The entire time I've been a Dragonball fan, I've never understood the hatred that exists for Dragonball GT. Certainly, out of the big four (Dragonball, DBZ and DB Super), GT is the weakest, but doesn't make it truly bad by any measure. I actually enjoy most of GT more than I do the Majin Buu, Dark Buu and Kid Buu sagas of DBZ, but I know I'm in the minority there. I honestly struggle to understand why GT is so maligned, especially before Super was created, when there was no "alternative" time-line (except for Zero Universe which we'll come to in the fullness of time); the 'best' explanation I can come up with is misogyny, which I haven't found to be a major issue in the Dragonball fanbase, at least compared to other geek communities. Most of the character designs are from Toriama, the plot is never any more ridiculous than any of the other Dragonball stuff. Whilst training with Uub, Goku is accidentally wished back to being a child by Emperor Pilaf using the "Dark Dragon Balls". The balls scatter throughout the universe and Goku, Trunks and Pan have to go get them. 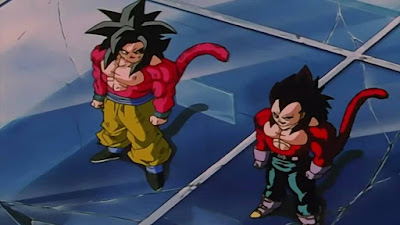 Finding the balls runs a lot like classic Dragonball in space, which works for me, but it would have been nice if a couple of the characters from that era could have shown up as well. From fighting Kid Buu, the power level is actually scaled back and Goku is forced to fight enemies that have interesting powers beyond punching and energy blasts; hypnotism, body-snatching and just fucking gigantic (as in, planet-sized) villains give Goku a run for his money without needing to find a new form of Super Saiyan. Eventually, the artificial life form, Baby, is unleashed and makes its way to Earth, corrupting the entire population and Goku must discover the power of Super Saiyan 4 to save his friends and family. I actually like SS4 more than I do SS3 because of the link back to the Oozaru powers from the Saiyan Saga, and the fact that the power is so great, even Goku can't control himself and almost causes colossal amounts of collateral damage. Yes, it's disappointing that Pan never goes Super Saiyan herself and the banter between her and Giru gets grating, but the Z Fighters losing because they're unwilling to hurt their teammates makes for interesting storytelling. 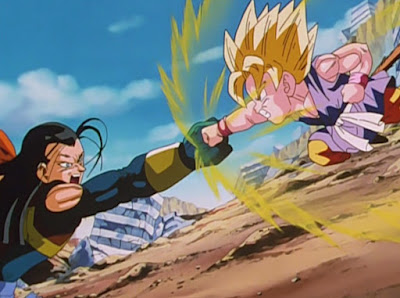 Dragonball GT gets really good once Baby is defeated and, literally, all hell breaks loose. As two versions of Android 17 race towards each other, every dead villain from the franchise comes back and the heroes have to fight them again. This may sound like a retread, but the fights are fun and there are a few references that mark Fusion Reborn as being canonical, so it makes me really happy. The Shadow Dragons are mostly pretty interesting, excepting Omega Shenron/Sin, but I really think making there be negative consequences for overusing the Dragon Balls was a stroke of genius. At the end of the series, Goku basically ascends to a higher plane of being with the Earth Dragon in what is the best ending any of the Dragonball animes have. Don't listen to the angry fanboys online, check out Dragonball GT for yourself, there's a lot to enjoy there. Also, I really like the theme song, but apparently everyone else hates it?
Posted by Hat Guy at 2:46 PM