In Australia, there is a political satire and commentary news programme called Shaun Micallef's MAD AS HELL, which, as well as being on the same broadcast network as Cleverman, likes to poke fun at the quality dramas that said network produces. The parody name for their take on Cleverman was "Too Cleverman by Half" and it turns out they were pretty much bang-on. Before I get too far on with this, there's some background that the international audience need to be aware of, the marsupial lion in the room, the history of genocide and cultural steamrolling of the indigenous peoples of Australia and the Torres Strait. Did you know that it was legal for a landowner to shoot a trespassing Aboriginal Australian in some parts of Queensland until the 1980s? So many lives, so much culture and even whole languages have been lost to colonialism and repeated government-mandated attempts to wipe out the native peoples of the country and an official apology was only issued by the Prime Minister less than a decade ago. So you may understand, that, what is essentially, the first big-budget contemporary Aboriginal Australian television production really needed to be something special. 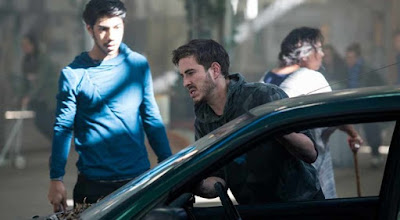 So why all the uncomfortable political background? Well, Cleverman isn't really that good, but to say so feels a tad bigoted in a climate where the difference in life expectancy between Aboriginal and non-aboriginal Australians is measured in decades. Set in a dystopian near-future Australia, the emergence of the "Hairy Peoples", super-strong, bestial and slightly-furry humans, from the native population has caused fear and cultural friction. Our protagonist, Koen, makes a living smuggling Hairies out of their ghetto then dobbing them in for the reward money, at least until his uncle turns up and grants him the mantle of "Celeverman", an Australian Aboriginal equivalent of shaman or witch doctor. Koen, of course, does not want the role and spends most of the series avoiding his responsibilities and denying his burgeoning super-powers. Therein lies the true problem of Cleverman, in Campbell's terms, Koen spends the entire series refusing the call to action, at least until the last episode, which plays more like a trailer for season two than an actual finale. 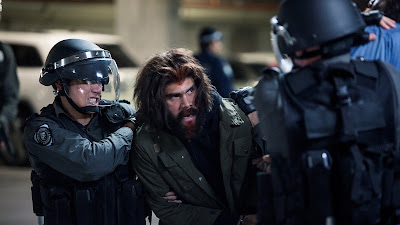 It's frankly a shame that Cleverman turned out the way it did, many elements of the programme are very interesting. The setting, for example, is intriguing, did Australia go fascist at some point? If do, how did that happen? Why are the hairy people being victimised? There are are couple of comments about "Hairy Terrorists", but we're never shown any evidence of this on a large enough scale to warrant such an extreme political reaction. Was there some kind of Australian 9-11? If so, what was it and how does it impact the country? Also, the elements of Aboriginal Australian spirituality are really interesting, but remain unexplained and are mostly confusing, even to a mythology nerd like me. There is potential in Cleverman, but it fails to be realised, hopefully it comes to something greater in the future and an Australian equivalent of The Falcon, Black Panther and American Eagle takes their place on the global Superhero stage.
Posted by Hat Guy at 3:55 PM

Email ThisBlogThis!Share to TwitterShare to FacebookShare to Pinterest
Labels: Television