I know I'll make a lot of Young Justice fans mad with the following statement, but; Justice League Unlimited is the best superhero television programme ever made. Yes, even better than Batman the Animated Series, but only just. Following on from the end of Justice League, the series opens with Green Arrow being forcibly recruited on to a mission with Supergirl and Captain Atom and sent into China against the wishes of the Government of the People's Republic. Although the team initially butts heads, they eventually work together to take down a giant atomic monster that the Chinese were building to defend themselves from the Justice League. The entire first season is given over to a conspiracy plot with Cadmus gunning after the League, which is masterfully done, with elements introduced as early as the first episode. Best of all, Cadmus has legitimate issues with the Justice League and neither side is demonstrably "bad", just two different approaches to defending the world. 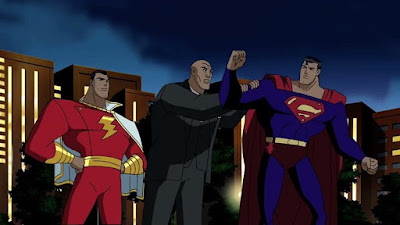 With such a huge cast of heroes, the focus tends to hover around a few for the most part, those being Supergirl, Green Arrow, The Question, Huntress, Wonder Woman, Hawkgirl and Green Lantern, though there are plenty of feature episodes so that Hawk and Dove, Star and Stripe, Vigilante, Booster Gold, Batman, Wildcat and Superman all get their moments as well. The villain roster is expanded with the Legion of Doom appearing in the second season, and Lex moving from the post-Crisis evil businessman persona to mad scientist/evil genius over the first few episodes. The writing is actually really sharp for a programme pitched at children, with great speeches by Green Arrow and Black Canary, Flash talking a villain down rather than fighting and Wonder Woman refusing to buy into Batman's moody brooding lifestyle. Even The Question's insane conspiracy ranting is done so well as to be pure entertainment; "The plastic tips at the end of shoelaces are called aglets, their true purpose is sinister." 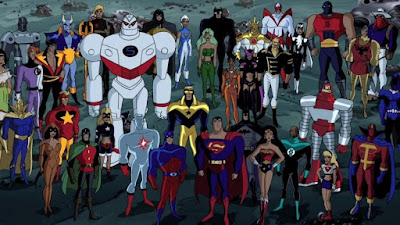 The one real complaint about I have about Justice League Unlimited, is the episode "Epilogue", which retcons the story of Terry McGuiness, aka Batman Beyond, to fit some weird Cadmus conspiracy, it just never sat well with me. Still, that's one episode out of the entire two seasons that I don't care for, which is a damn good hit rate. I've said it before, but when I think of DC heroes, these are the versions that spring to my mind for the most part; there's a great mix of iconic and revisionist that makes it a joy to watch every time. If you've never seen Justice League Unlimited, do yourself the favour of checking it out, even just to see Superman fighting Captain Marvel, Wonder Woman turned into a pig and probably the best Superman speech ever put to multimedia; "That man won't quit as long as he can still draw a breath, none of my teammates will. Me? I've got a different problem. I feel like I live in a world made of... cardboard. Always taking constant care not to break something. To break someone. Never allowing myself to lose control, even for a moment, or someone could die. But you can take it, can't you, big man? What we have here is a rare opportunity for me to cut loose, and show you just how powerful I really am."
Classic.